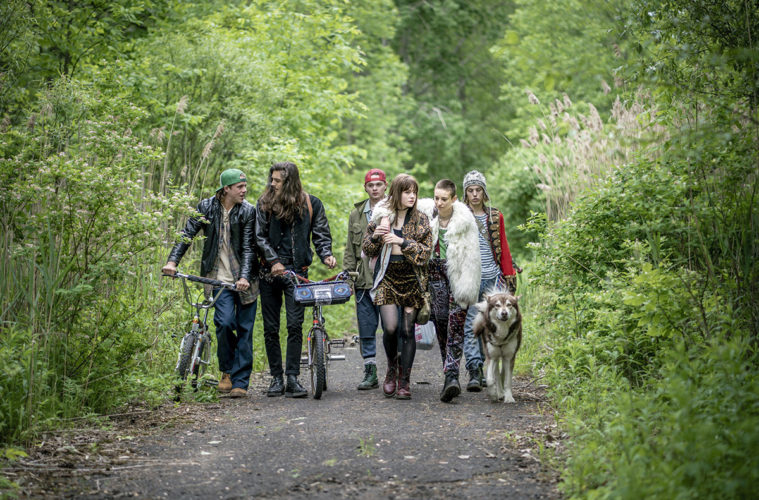 Die-hard grunge fan (and drug dealer) Fred (Noah Parker) tells Catherine (Kelly Depeault) she can’t play her Hole CD because Courtney Love killed Kurt Cobain. It’s a remark that was probably half joke and half memorial that leads into Keven (Robin L’Houmeau) dropping the necessary wisdom of knowing Love wouldn’t have been able to stop him if she tried. Cobain wasn’t a victim. He lived hard and walked a road of his own making to an end he ultimately embraced enough to pull the trigger. It’s the same type of lives these Québécois teens lead—mescaline, sex, rock-n-roll, and rage. So when Catherine replies with an “I don’t care” after being confronted about her fast-moving downward spiral, she isn’t being flippant. She truly doesn’t. She’s embraced the risks.

This is the reality many coming-of-age films forget. You need the complexity of the characters’ self-destructive nature to remain intact because it isn’t always a cry for help. Sometimes it’s a response to their surrounding. Rather than numbing pain, they’re removing that pain’s power from ruling their life. That author Geneviève Pettersen allowed her novel’s lead to embrace a descent from the straight-and-narrow into hedonism this way is what drew director Anaïs Barbeau-Lavalette to the material. She asked her producer to option Goddess of the Fireflies after reading it in one sitting because she knew she had to bring it to life with all its raw, 1990s adolescent energy. With Catherine Léger writing the adaptation, Barbeau-Lavalette was able to do exactly that.

Just look at Catherine’s life at the start. She’s an excitable young woman who has the right friends and does well in school all while pining over the cool, cute boy from another clique (Antoine DesRochers’ Pascal). What has following the rules gotten her, though? There’s the sixteenth birthday that her parents (Caroline Néron’s Mom and Normand D’Amour’s Dad) use as a weapon to hurt each other by giving her what the other doesn’t approve. There’s the screaming match followed by an impending, messy divorce that will end up exchanging Catherine’s comfortable existence in a huge house for much smaller accommodations farther away. And her innocent glances at Pascal? They earn a punch to the face from his girlfriend Mélanie (Marine Johnson). Rebellion is therefore unavoidable.

All Catherine sees are acts of retribution from adults and peers. No one gets punished. No one leaves happy. And she’s left feeling like a pawn in their respective drama. So she seeks to create her own by ignoring social conditioning to kiss Pascal. Be the one causing chaos rather than its collateral damage. Lean into Dad’s petty gifts of thousand dollar checks and reap the benefits while allowing the truth of their purpose to wash away. Hang out with the burnouts not to get back at her parents, but to have some fun before her own future turns just as sour as theirs without any memories worth holding onto. Live fast like Kurt Cobain and throw caution to the wind to strip away every single ingrained inhibition.

It’s not a perfect childhood by any means, but it is hers. And that matters. If Catherine wants to do drugs with new best friend Marie-Ève (Éléonore Loiselle), she will. If she wants to have sex with Pascal despite her mother seeing through a ruse to procure birth control, she will. If someone hurts her, she’ll hurt him/her back. And when the initial rush of anger disappears, she’ll nonchalantly act as though it was no big deal in the first place. Life is too short to hold grudges when the alternative is a few snorts of powder destined to let the world wash over her like waves of blissful ignorance. Catherine is done being the only person who isn’t motivated by selfishness. She’s going to take what’s hers.

The journey is invigorating with a stellar soundtrack (David Bowie, Portishead, Chuck Berry, and The Jon Spencer Blues Explosion), pop culture references (Pulp Fiction, The Crow, and Christiane F.), and gorgeously kinetic cinematography. Barbeau-Lavalette is also unafraid to expose just how out-of-touch parents were back then—the era just before the internet’s proliferation made it so every subsequent generation moved further and further from the last. To have a scene of sexual exploration and enlightenment between two characters in love (not just lust) is to show the emotional maturity and heightened sense of feeling these kids have beyond a parental gaze of them being “children.” It makes Catherine’s folks getting a cop to “scare” her off drugs via crime scene photos that much more ludicrously patronizing.

This disconnect is crucial to the vision of adolescence Goddess of the Fireflies provides because it sheds light on the fact that death doesn’t scare kids as much as obsolescence. Someone can almost overdose and another can attempt suicide and neither will change the lifestyle these teens have chosen because those events go hand-in-hand with it. This is probably true even more today with the prevalence of school shootings forcing the preciousness of our mortality to have a front seat earlier and earlier with each new class of arriving students. Tragedy might get them to act out even more because life is too short not to go all out and refuse regret. They’ve become addicted to the electricity of being forever present to the unpredictable whims of now.

So don’t expect easy answers or manipulated trajectories foreshadowed at the start. Where Catherine goes next is predicated on nothing more than what she does the second beforehand—unless someone intervenes against her will. The darkness that rises is as inevitable as it is random because they’re all running to a cliff’s edge at full speed. Will Catherine learn a lesson by its end? Who knows? Some of these kids will survive and other won’t just like every generation. Some parents will realize the error of their way to bridge the gap with their children and others will have the opportunity to do so stolen from their grasp. What Barbeau-Lavalette puts on-screen is a truth beyond cause and effect. It’s our youthful desire to be free.

Goddess of the Fireflies world premiered at the Berlin International Film Festival.