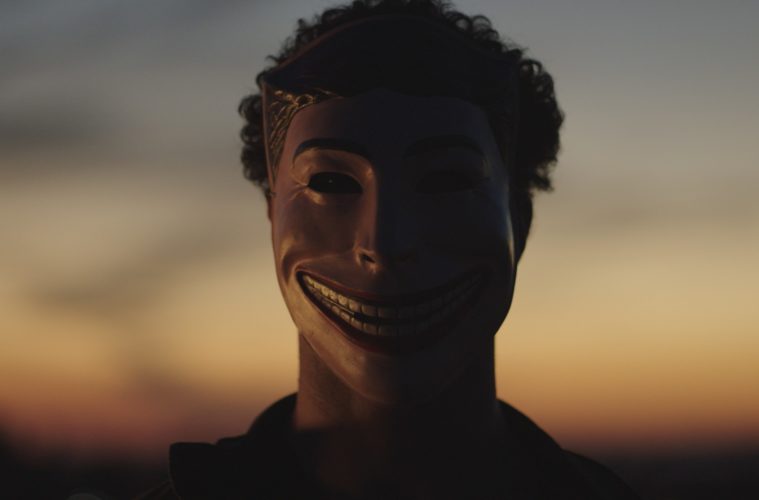 A girl in a headscarf meets a boy in a mask while trying to shoplift from the corner store where he works. She is frustrated from living at home with an uncle who doesn’t get her. He is frustrated because his grandparents have been evicted to make room for new swanky apartments. Romance and vengeance are soon both on the cards.

Funny Face is the latest work from Tim Sutton, a New York-based director whose previous films–Dark Night (a bold revisiting of the 2012 cinema shooting in Colorado) and Donnybrook (about a lucrative bare-knuckle boxing match)–also focused on violent loners, albeit of a different variety. Cosmo Jarvis stars as Saul, a lonely outsider who enjoys James Dean, smoking cigs and watching the Coney Island Cyclone from the rooftop of his apartment. (It’s never made explicitly clear, but his erratic behavior suggests some form of autism.) His love interest is a younger Muslim woman named Zama (played by newcomer Dela Meskienyar); the Bonnie to his Clyde. On a 48-hour odyssey the duo will buy some Nikes, hit some delis, and rob a car. More nefarious plans are made a little further down the line.

Sutton has dubbed his latest “a New York movie” and that sense of place and authenticity is worthy of note. Shooting on-location with some lovely skylines, DP Lucas Gath (who worked as a second unit cinematographer on Luca Guadanigno’s Suspiria remake) finds a gritty warmth and icy detachment in the contrasting moods of Brooklyn (where our heroes wander) and lower Manhattan, respectively. The latter locale is home to the film’s antagonist, a nameless moneyman (played by Jonny Lee Miller) who Sutton introduces first in frightening close-up at a dinner scene and, soon after, with a bizarrely gratuitous sequence in which three naked women role around on the floor of his high rise apartment. The characterizations are threadbare and simple: Saul and Zama are the downbeat 99% (his creepy mask recalls both Joker and Anonymous); Miller’s character represents soulless commerce.

What Funny Face lacks in social commentary, however, it makes up for in mood. Gath’s work is exceptional as is the sultry lighting. Ex-LCD Soundsystem guitarist Philip Mossman’s synth-driven score builds tensions where tensions ought to be built. These factors combine to create a sleepy sense of aloofness that is seductive but occasionally comes at a cost, leaving the actors to do much of the emotional heavy lifting with physicality alone. Jarvis is not short on this as a handsome and bulging pressure cooker in black denims, but there is a sense we are being denied the full array of his charms. It should perhaps not be so surprising in a film whose most obvious forbearer is Nicolas Winding Refn’s Drive.

Sutton aims for a similar mise-en-scène–all granite facial expressions, neon lights, and slick cars. In an early moment, Saul and Zama stand in silhouette on a Brooklyn rooftop as she inquires about the mask. “Maybe I’m a superhero,” comes the burgeoning vigilante’s reply. In close-up–and lit starkly from above–Miller’s face could also have been pulled from a comic, a picture of greed and menace that Sutton uses to great effect in two of the film’s strongest vignettes: that early dinner (a Faustian deal in a swanky downtown eatery) and, later on, in a conversation with daddy (this one in a humble family restaurant). This claim that a once wholesome economy has turned parasitic is fair enough, but it feels bolted on and merely decorative to the narrative. Such moments are fine vignettes but, like a great deal of Funny Face, they offer much to admire without ever quite gelling into a cohesive whole.