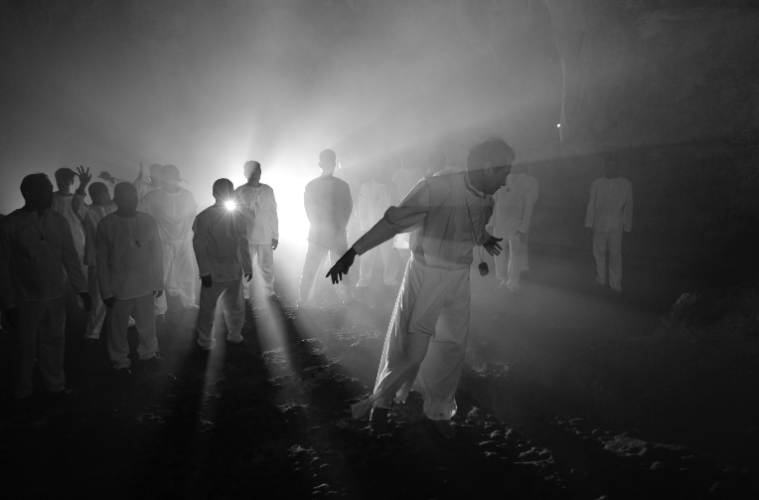 [Berlin Review] A Lullaby to the Sorrowful Mystery

Starting with the Spanish conquest of the Philippines in the mid-16th century, the country was under the colonial rule of four different foreign powers for nearly 400 years. Independence gave way to two decades of vicious dictatorship and a democracy severely compromised by corruption and extensive external influence. As a nation that encompasses a staggering number of ethnicities and languages, the Philippines’ centuries-long experience of oppression has engendered an enduring identity crisis. It’s this crisis that has brought forth the films of Lav Diaz. They are dedicated to an excavation of his country’s turbulent past in search of its identity; the simultaneously chimeric and vital nature of this endeavor constitutes the emancipatory dialectic that drives his cinema. Having addressed Ferdinand Marcos’ dictatorship from a variety of angles in several earlier features, Diaz turns his attention to the Philippine Revolution of 1896-97 with A Lullaby to the Sorrowful Mystery, an extraordinarily rich, initially exasperating, yet eventually marvelous postmodern epic.

The problem with saying “initially” when discussing the 485-minute-long Lullaby is that it signifies a few hours, and the first three or so are very difficult to sit through. The film begins on December 29th, 1896, the night before the execution of José Rizal, a doctor and writer whose novels Noli Me Tángere and El Filibusterismo were instrumental in instigating the revolution against the Spanish colonizers. Though the location isn’t specified, it’s presumably Manila, and a large number of characters appear in quick succession, including the young poet Isagani (John Lloyd Cruz); his pro-revolutionary friend Basilio (Sid Lucerio); an unnamed Capitán General (Bart Guingona), i.e. the Spanish military governor; his guilt-ridden Filipino mistress, Cesaria (Alessandra de Rossi); the real-life figure Gregoria de Jesús (Hazel Orencio), who is held prisoner by anti-revolutionary Tagalog soldiers along with her husband, the revolution’s leader Andrés Bonifacio; and Simoun (Piolo Pascual), a mysterious man with a suitcase full of gold who is hunted by the authorities but appears to be in cahoots with the Capitán General.

Stylistically, this first stretch of Lullaby is a mess. Most of the scenes take place at night and the purposely artificial lighting, combined with the black-and-white images and the frame’s boxy aspect ratio, seems to indicate that Diaz is going for a tribute to classic Hollywood cinema in the vein of Miguel Gomes’ Tabu and Raya Martin’s Independencia. Then some shots approach the extreme aesthetic of German Expressionism, in others the mise en scène is distinctly theatrical, while the daytime exterior scenes are mostly unembellished. These jumps occur abruptly and without apparent consistency. Moreover, the costumes, make-up, and production design are largely unthinkable for a 19th-century setting: characters sport modern hairdos and shirts with prints that wouldn’t exist for several more decades, and the period is further betrayed by props such as a stainless steel tripod or plastic sandals – at one point even an electric spotlight can be seen affixed to a building façade in the distant background.

All of this can of course be rationalized as intentional, but the film lacks a sufficiently coherent internal logic to sustain such a claim. Rather, the growing impression is that of a filmmaker not fully in control of his material, something that is particularly manifest in the few scenes composed of multiple camera positions. (Lullaby resembles Diaz’s previous films in its predominance of fixed-camera sequence shots.) The lighting often doesn’t match across cuts, so that characters might be outdoors at night and then walk into a room where the brightness outside the window is pronounced to the point of resembling sunlight. In some instances, alternative camera angles are so incongruous that it’s not even clear they’re capturing the same location, as when the Capitán General is visited by apparitions while smoking opium and it appears as if the scene is split across two temporalities in different rooms, but it’s actually the same moment, just clumsily re-framed. The same is true for the period setting anachronisms: arguably, Diaz’s intention could have been to endow his film’s allegorical dimension with timelessness in order to reinforce its contemporary relevance. If so, they should have received much more emphasis, as they are currently too minor yet too noticeable, looking like mistakes borne of negligence and / or budgetary constraints.

Most frustrating, however, is the lack of exposition. The narrative keeps cycling through characters who are engaged in actions or conversations that aren’t introduced or areonly obliquely contextualized, so that it literally takes hours to figure out what all the characters are up to, how they relate to one another, and, in some cases, even put a name to a face. This may be less of a problem for Filipino viewers, most of whom will be familiar with José Rizal’s novels, which are a mandatory part of the school curriculum in the Philippines. Characters such as Isagani, Basilio, and Simoun are drawn from the novels, and Diaz both lifts events directly from Rizal’s writings and creatively extends the characters’ stories. For example, in an early scene Isagani laments betraying his country for the woman he loved, an act that is never shown but haunts him for the rest of the film. This betrayal occurs at the end of El Filibustero, as the literary Isagani thwarted Simoun’s plans to plant a bomb that would have killed the Spanish authorities as well as Isagani’s beloved. This intertextuality isn’t clearly signposted even though it’s crucial to understanding why, in the film, Isagani ends up helping Simoun, who seems to be collaborating with the Spanish, but is in fact instigating violence in an effort to catalyze the revolution – an aggressive approach towards independence which Rizal symbolized through the attempted bombing and Diaz expands on in his version of Simoun’s character.

Eventually, protagonists do emerge and, even without having read Rizal’s novels, a sufficient understanding of their various roles can be parsed from the film. The characters’ configuration and trajectory start to make clear sense almost halfway through, roughly at the same time that Lullaby relocates to the jungle for good. At long last, Diaz is back in his element and his formidable talent is allowed to shine. A quality essential to the success of marathon features (e.g. Diaz’s others or Béla Tarr’s seven-hour Sátántangó) is that they fully immerse viewers into their narratives and let them be transported by their sedate rhythms, something that the first few hours of Lullaby, with their frenetic stylistic and narrative variability, rendered all but impossible. Thereafter, the cinematography remains largely consistent (and consistently breathtaking) while the plot is split into two main strands: Simoun and Isagani in the first, looking to bring the wounded Simoun across the jungle to safety; Gregoria, Cesaria, and two others in the second, searching for the body of Andrés Bonifacio, who was murdered by the Tagalog soldiers somewhere in the jungle. Diaz takes his time in charting their separate quests, granting viewers the space necessary to contemplate his weighty themes and enjoy the immense pleasures that characterize his filmmaking.

With Andrès Bonifacio dead and Filipinos fighting amongst themselves, the revolution is portrayed as a corrupted, hopeless cause. By escaping into the jungle, the characters enter a purely symbolic realm. Their respective pursuits are rendered as an odyssey representing a desperate attempt to salvage the nation’s psyche. They make several encounters along the way, including with a group of Colorums, a religious sect awaiting the return of a legendary figure named Bernardo Carpio, and a trio of Tikbalang, mischievous half-horse, half-human creatures drawn from Philippine folklore that appear like Lynchian visitations, infiltrating the characters’ imaginations and leading them astray while neighing, snorting, and snickering demonically. Relying much more on the power of his spectacular images than in the dialogue-heavy early sections, Diaz creates continuously extraordinary tableaux, pitting his characters against nature’s monumental insurmountability and endowing their journey with epic momentousness. The narrative strands intersect only once: in a wonderful fantasy sequence that sees all the characters come together for a cheerful bacchanalia. Because of the scene’s obvious surreality, Diaz’s use of anachronism works perfectly here, and he brings in a brass band to play a jazzy tune as the human and folkloric characters drink, eat, and dance, reveling in an ephemeral moment of community and harmony. This scene represents the unity to which all the characters – and, by extension, the Filipino people – aspire, but history continues to prevent. Throughout Lullaby, characters place their hopes in an illusory external salvation, one primarily expressed in messianic terms: Cesaria’s anguished search for Andrés Bonifacio, the Colorums’ fanatical wait for Bernardo Carpio, Basilio’s maniacal digging for treasure. All of these result in shattering failure, and Diaz proposes two alternatives towards redemption: forgiveness and art.

Each of the protagonists have betrayed the revolution in some manner, and it is only by accepting their own guilt and forgiving that of others that they are able to find their way out of the jungle and move on. When Cesaria admits to telling the Capitán General about the existence of a secret passage — thus enabling a massacre, Gregoria’s rape, and the capture of Bonifacio — Gregoria attempts to kill her with a rock, yet stops herself upon realizing her own sins; she is literally unable to cast the first stone. Diaz further appropriates Christian imagery by turning Simoun into a Christ-like figure. At the film’s end, Simoun lies supine on a pallet with a bullet hole in his side, his posture and wound recalling the Lamentation of Christ, and his final act before dying is to free a slave by giving her all of his gold.

Earlier, Isagani and Simoun had discussed the role of art in human affairs, with Simoun concluding that it signifies freedom. In Rizal’s novels, Simoun is generally interpreted as an alter-ego for the author, and by turning him into a secular Christ, Diaz elects art as the only true means of deliverance for a people who have never been allowed their freedom.

A Lullaby to the Sorrowful Mystery premiered at the 2016 Berlin International Film Festival and is currently without U.S. distribution.