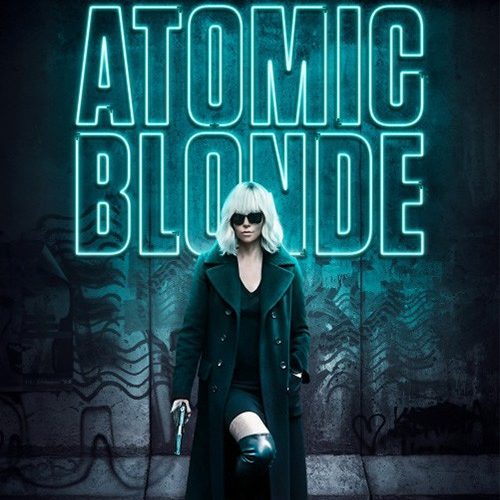 There’s a bargain underlying the whole of Atomic Blonde, wherein director David Leitch wavers between its more cheeky qualities and its adherence to the conventions of generic spy fare. The film is, by definition, “cool” in every sense. Despite some wonky plotting best described as Diet John le Carré and a heavy-handed soundtrack that occasionally gets in its own way, Charlize Theron plows full steam ahead with a taut precision and a physicality commanding every moment with an icy ferocity. Thankfully, this helps you ignore the moments where Leitch employs a somewhat masturbatory, Nicolas Winding Refn-esque tendency to remind you how fucking “cool” it all is.

Set in Berlin just prior to the collapse of the wall, Theron’s Lorraine Broughton is assigned to track down a much sought-after list of all the double agents deployed by MI6 throughout the Cold War. What worked for Mission: Impossible and Skyfall can work just as fine here. We’re here for the Stoli, the neon lights, and Charlize’s brawling blonde, after all. This is where Leitch’s balancing act gets a bit murky.

We’re treated to graffiti-laden visual flourishes and some cheer-inducing beat downs, adding a knowing quality to the proceedings for a certain freshness. All of this is elevated by Theron’s irreverence and brute force demeanor, until we’re dragged back into screenwriter Kurt Johnstad’s half-baked cloak-and-dagger antics. The double-crosses and shaky alliances throughout the film try to register as clever spy movie melodrama, but Leitch misses the mark. The twists are telegraphed, and the betrayals fall flat. He’s positioned the film as Tinker, Tailor via La Femme Nikita with a peppering of No Way Out, but it doesn’t quite gel. Even James McAvoy’s playful turn as David Percival (picture James Bond if he went AWOL and watched Fight Club too many times) can’t help but feel like a distraction while we’re waiting for Lorraine to pummel the next unsuspecting KGB goon. Only her tryst with rookie French agent Delphine Lasalle, played with a perfect vulnerability by Sofia Boutella, provides the film’s limited emotional resonance.

Atomic Blonde thumps along to the beat of its heavily curated soundtrack much with the same sauciness that propelled the crowd-pleasing Baby Driver earlier this year. Like that film, the sheer volume (in both quantity and decibels) of on-the-nose music cues gets a bit exhausting. What decade does this take place in? I don’t think I caught it. A nostalgia boner for 80s jams, even with an 80s setting, is still a nostalgia boner. Some beats land better than others, though: David Bowie’s theme from Cat People might have played better if it didn’t immediately conjure up images of Quentin Tarantino’s similar cue in Inglourious Basterds. On the other hand, a beautifully-choreographed scuffle set to George Michael’s “Father Figure” is one of the film’s peaks, culminating in an improvised rappelling escape out of a window (a move that will never not be awesome). The movie plays better when the music compliments the bone-crunching sound design, and is at its best when that sound design takes over.

The cracked joints and blunt force trauma are where Atomic Blonde excels. Every blow lands with a cringe worthy thud or crack, and the brutality on display is captured in patient wide angles, rather than frenetic editing. Jonathan Sela’s camera, filtered through purples, blues, greens, and sickly yellows, lets Theron’s movements (ferocious or stoic) do the work. The film itself becomes a bruise, reaching its apex in a long-take melee for the ages, where the music disappears and the only vocals on hand are Lorraine’s exasperated grunts and roars. Here Theron, in all her glorious might, is the lynchpin in an uneven but highly entertaining spy caper. To call her Jane Wick is not only reductive, but a bit insulting — she’d obliterate John handily.