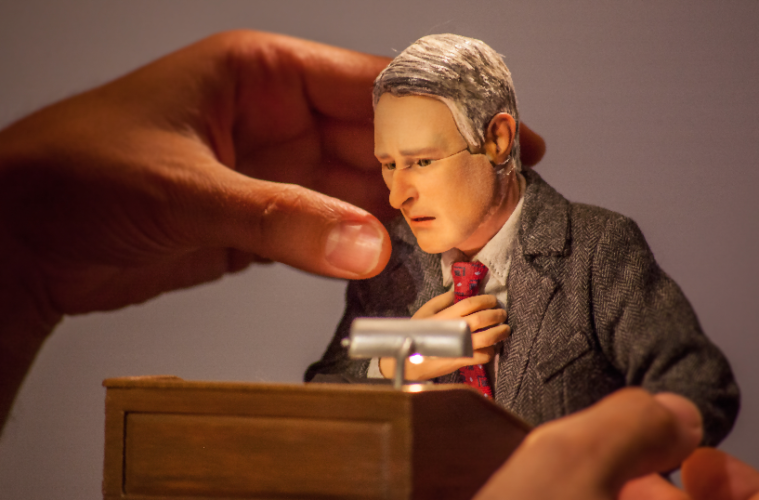 “Charlie Kaufman told us if we could get the money we could do it,” says Rosa Tran, producer of the Oscar-nominated animation Anomalisa. The project, which adapted Kaufman’s 2005 stage play into a stop-motion animated feature about a customer service speaker who falls into a eerie routine where everyone looks and sounds the same until he meets a woman that changes him, had humble beginnings and was almost a short film. Tran has helped usher the project from the very start when it was just co-director Duke Johnson and herself working to make a Kickstarter project video using a rented studio and old puppets.

“We were working together at Starburns Industries and wondering, ‘what’s the next project?’” recalled Tran. “Duke got a hold of [Kaufman’s] script from Dino [Stamatopoulos] and immediately wanted to make it.” When they initially pitched the project at various studios they were either rejected or told to turn it into an episodic format that could be aired on television. The small screen didn’t scare Tran and Johnson, who had worked together on stop-motion animation for TV’s Moral Orel and Mary Shelley’s Frankenhole, all produced by Starburns Industries. But they envisioned something bigger for the project.

“Then someone said we should try Kickstarter, so we shot the Kickstarter video and off we went,” Tran said. Anomalisa serves as the first feature film for Tran as a producer, who cut her teeth in live action. She brings a giddy enthusiasm to the production side, laughing during our interview and showcasing her absolute infatuation with the process. When I ask how she keeps track of everything that moves at a snail’s pace — it takes approximately one week to animate a minute of usable footage in the stop-motion animated format — she dives right in.

“We have this thing at the studio called The Big Board and it’s literally a big board,” she said, laughing. “It’s broken into all these different stages. Stages 1-18. Each stage is assigned a scene based on the size of the stage with additional angles. In order for us to shoot in stop-motion you make multiples of sets and multiples of the puppets. So by the end of Anomalisa we had eight identical hotel rooms, we had three stages with the hotel hallway, we had the lobby on one stage and the hotel elevator on another.”

Tran equates the entire process to a game of Tetris. Each morning you gather everyone around the big board and go through each shot. It’s all hands on deck from the outset. Everyone from lighting, art, and directors show up to each stage and give final approvals before the animators are left to begin the tedious but rewarding process. The extensive technique takes quite a long time and that is part of the reason why the Kickstarter campaign ruffled the feathers of a few of their backers — some of the entire 5,770 of them — who had helped raise just north of $400,000 for what was initially going to be a 40-minute production before more funding was secured.

“We were naive,” Tran recalled. “We didn’t think it would take this long and encounter all these different problems. You just lose track of time and forget to update them. I can see it from both sides and I definitely understand.” Despite that, she still loves the way they were able to utilize Kickstarter and sees it as a place for great things. “How cool is it that there is a site where you can go and support these independent projects and get excited?” she asked. “You literally put your money where your mouth is.”

The enthusiasm Tran brings to the production role isn’t something she sees changing anytime soon. It would be easy to think that the long hours and constant juggling might wear her down. So I asked her whether she thought she would move back to live action. “I was so miserable,” she laughed, recalling her days as an assistant on live-action sets. Besides the long hours and tough work, she emphasized that people think there is something glamorous about being on a live-action set that just isn’t the case.

“I got involved in animation and it was like something clicked,” Tran said. “I call it the animation bug. You go onto a stage and it is beautiful.” She specifically tells the story of her days on the long-running stop-motion animated TV show Robot Chicken and how they had a Star Wars special. “You go onto the stage and there’s the scene where the AT-ATs are crossing over this icy terrain and I’m looking at the AT-ATs on this 20 by 20 set,” Tran noted. “I look at the computer monitor and I look back and forth and it’s like a magic trick. The snow is perfect. The AT-ATs are perfect. The little stormtroopers are perfect. When you look on the screen, it’s like the movie. The small details are so amazing.”

That animation bug has even bled into real-life for Tran. “I see people and I’m just like, ‘You’d make a good puppet,’” Tran exclaimed, laughing in an infectious tone. “It’s exciting because you just get to make it. There’s something warm about stop-motion that CG just doesn’t have. It’s the life that everybody puts into it. There’s the invisible animator hands that you don’t see. Or how everybody that makes it touches an object and brings it to life.”