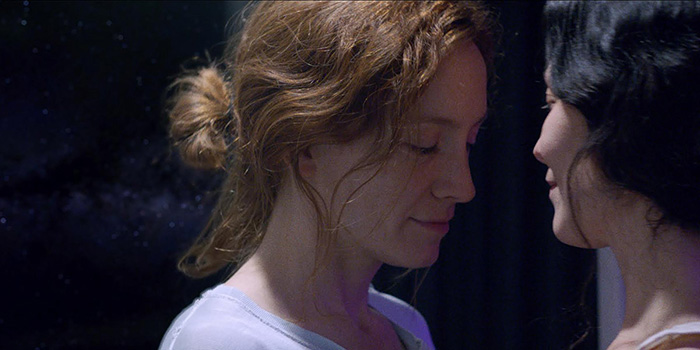 With High Life approaching and Ad Astra arriving this summer, it’s shaping up to be another year of bold, beautiful sci-fi and one we hope doesn’t get swept under the radar is a favorite from the Toronto International Film Festival. Directed by Pella Kågerman and Hugo Lilja, Aniara is based on 1956 poem by Swedish Nobel laureate Harry Martinson and follows a group in a spacecraft bound for Mars that steers off course and an existential crisis kicks in for the passengers. Ahead of a release this summer, Magnolia Pictures has now released the first trailer.

Jared Mobarak said in his review, “Think High-Rise in space, the existential crises of being trapped in this cage feeding anxieties until sanity becomes hard-pressed to sustain. Chefone finds himself consumed by the power his position as captain affords — the trepidation and fear of mutiny at the start transforming into an entitled confidence as though a king lording over his court. Cults begin to rise — one built by a mother who was inconsolable at the news she wouldn’t be attending her son’s fourth birthday party (Jennie Silfverhjelm). And even those who appear too jaded to be affected (Bianca Cruzeiro’s logistics specialist Isagel and Anneli Martini’s unnamed astronomer) find themselves slowly losing their grip on life’s meaning against the vastness of space.”

A ship carrying settlers to Mars is knocked off course, causing the consumption-obsessed passengers to consider their place in the universe, in Pella Kågerman and Hugo Lilja’s eerie and caustic sci-fi adaptation of a work by Swedish Nobel Prize–winning writer Harry Martinson.