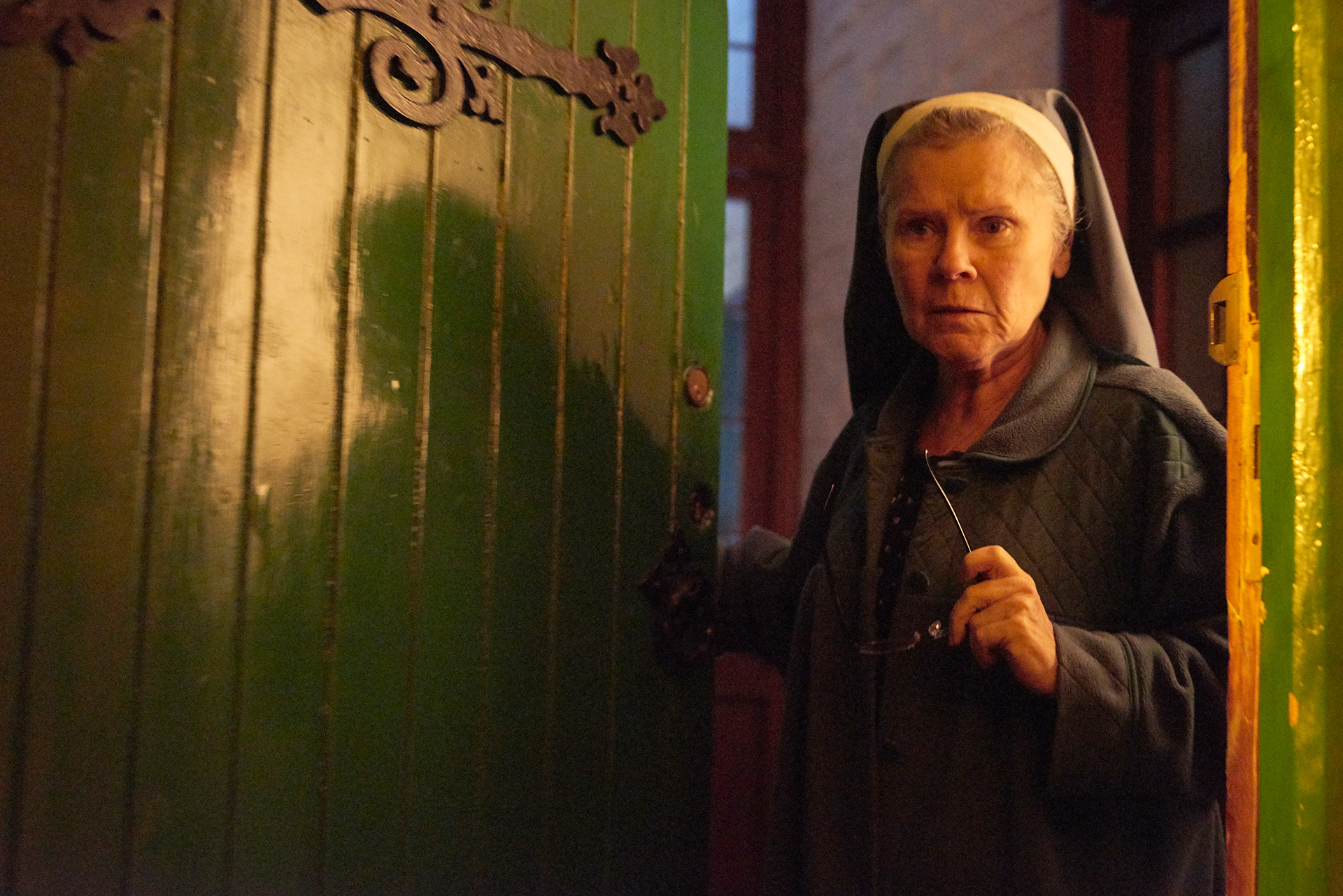 Trust is earned, not given. Just because you believe you’re a just person who’d do everything in your power to protect the less fortunate doesn’t mean they should blindly provide their allegiance. They need to know for sure that what you say and do is true. They need to know that you aren’t acting one way via deception in order to act another way later out of some warped notion of entitlement. There are too many people in this world who believe that the bare minimum is worth both material spoils and sainthood to want for nothing in this life and the next. It’s how billionaires justify yearly earnings off the backs of others’ labor—turning so-called charity into profit. True heroes, however, never feel owed.

We therefore ask ourselves whether or not Tomaz (Alec Secareanu) is someone who deserves the trust of strangers or if he’s someone who demands it. Writer/director Romola Garai isn’t going to provide any answers to that question until she’s ready, though. Her debut feature Amulet has much loftier ambitions than just one man despite a self-contained narrative that fully surrounds who he is and what he’s done. So she must keep a lot of information close to her vest in order to sustain the lesson that’s central to those motives. Well, it’s less about hiding information as much as it is context. Because by the time we discover the truth about Tomaz’s past, the details are still only half of the puzzle. The consequences are still only half-formed.

While the result does mean the final ten or so minutes refocus the entirety of what came before, Garai’s conclusion doesn’t undo any of it. That’s an important distinction since films of this ilk often prove unable to support their twist as anything more than trickery. This one conversely serves as a key that unlocks its spiritual retribution. Amulet in effect lulls us into a false sense of familiarity by positioning genre conventions and gender norms as an artificial façade waiting to be torn down. Garai wants us to pity Tomaz and his struggles with whatever haunts his dreams. She wants us to pity Magda (Carla Juri) and lament her selfless duty to care for her ailing and abusive mother. That pity reveals how our assumptions need readjusting.

Why? Because we’re asked to trust these characters without evidence that it’s deserved. Trust that Tomaz’s demons are formed by external actions not yet seen. Here’s a man remembering a situation that occurred two years previously while stationed at a checkpoint during an unnamed war. He should have shot a woman (Angeliki Papoulia’s Miriam) running towards him like she was the enemy and yet he didn’t. His fear got in the way. His guilt got in the way. So he shelters her instead. He saves her life and yet now suffers from the horror of what that decision wrought. We trust that he’s a victim too—that his protection wasn’t enough. We trust that forgiveness remains possible for him both by God and also by himself.

We’re asked to trust the kindly nun (Imelda Staunton’s Sister Claire) who finds him bloodied on a London street. She gets him the help he needs and offers security from a life of squatting in abandoned buildings and taking off-the-books construction jobs. We trust she has his interests at heart just like we trust she holds those of Magda tightly too. Connecting these two is thus a means of supplying a form of companionship neither has allowed him/herself to enjoy. Tomaz has shied from human connection because of what happened to Miriam and Magda has rejected it because of how jealous her infirm mother gets. But if he fixes her black mold-ridden home and she provides him shelter and food, maybe they’ll both able to heal.

What has Garai provided us to earn this level of faith? Nothing besides that aforementioned familiarity. What does she give us to invest in their wellbeing? Evil. So just as those nightly flashbacks gradually expose the progression of events that lead Tomaz to his trauma, the daytime sheds light on the illness that is afflicting Magda’s ward. The black mold leads to albino bats. Teeth marks in forearms lead to bites. And the duplicitous nature so evident in Sister Claire’s motivations is explained away as her own cross to bear where it concerns the presence of demonic entities on Earth. The pieces start to fall into place as we ascribe darkness to a totem found in the woods and a relationship bound by a master/slave dynamic.

Just because the pieces fit, however, doesn’t mean the correct picture forms. You’ll know this too as things start feeling very off. Garai is again leaning on our assumptions of good versus evil, man versus woman, and God versus Satan. She presents a solution that’s morally unsound in the way it not only trusts that a despicable person (no matter their upbringing, intentions, or remorse) has learned a lesson, but that learning should be permissible when vengeance is still a viable option. I was ready to give up on this whole endeavor because it seemed as though forgiveness was being taken way too lightly only to discover my disgust was the point. If a victim must live with the scars of their assault, so too should the perpetrator.

Isn’t that what Hell’s brimstone is about? Suddenly the sorrow in Tomaz’s eyes looks more like fear. The anguish in Magda’s looks more like determination. And the potential for unlikely romance under arduous circumstances looks more like a trap preying upon man’s desire to get what he wants—to be paid in full. Like so much of Amulet, this payment will be taken twice. One is stolen, the other earned. One is by a man who believes he’s owed, the other by a woman who most definitely is. He fancies himself a righteous figure simply taking what’s his while she’s shown to be almighty in her quest to stage a much-needed reckoning. Just like with trust, forgiveness must also be earned. Predators often relinquish their right to both.

Amulet opens at drive-ins and hits VOD on July 24.