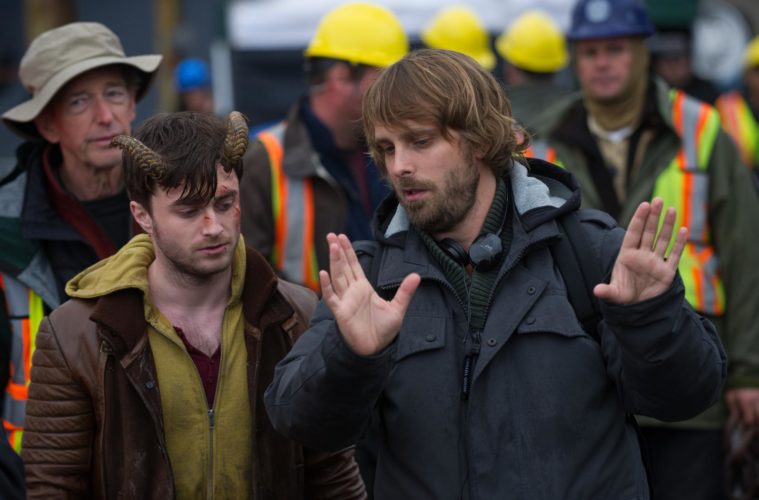 Director Alexandre Aja, whose Horns is currently available through VOD and will hit a limited theatrical release this weekend, made his name with vivaciously violent horror films which shock audiences and yet he is also one of the more economical filmmakers out there. This time around with his adaptation of the hit bestseller by Joe Hill, Aja is at a crossroads because he has over 400 pages of material to try to fit into an R-rated love story that never embraces the horror aspect fully but instead delves into some fun fantasy elements in precisely two hours of runtime. Daniel Radcliffe plays Ig and he is the prime suspect of the investigation into the murder of Juno Temple’s Merin, whom Ig was dating.

In many ways the film is a love story but with an odd twist. Ig maintains his innocence but soon after Merin’s death he starts to grow horns from his head and have an odd effect on the people around him who suddenly start confessing things to him and asking him for permission. After the U.S. premiere at Fantastic Fest last month I had a chance to sit down with Aja to talk about the film. We discuss him going and presenting at Comic-Con, the nature of adapting the book into a two-hour film, challenges of making a film like this, the fact that his movies are usually short, how blockbusters are getting longer, why he might have took the option to make it into a TV series, and how he wishes people would edit his films for TV, and more. Enjoy the full conversation below.

The Film Stage: So, I know Daniel Radcliffe ran around Comic-Con dressed as Spider-Man.

Do you have any interest in walking around the convention floor like that?

I did! And I don’t have to hide myself.

No one recognizes me!

When did you get in?

And you’re going to be taking off again?

In a few hours. Yeah, I’m prepping another movie. Wow. [Looks above Aja]. Holy shit. That is a great poster [pictured right]. Who designed it?

That’s a great question. I don’t know. It’s like the marketing team. It’s coming from their brain.

I especially like the way the title looks. The way the horns are stylized just like in your title card in the movie.

Oh, okay. It’s snakes. I get the reference now.

There’s a lot of snakes.

Definitely! You know, this film is 120 minutes on the dot. I’m curious about that. Any time I see a film like that  I’m always like, “How’d they arrive at that?”

I think we’re an hour and 59 minutes. Which is super important in the 99 cents. But yeah, I cannot believe that I managed to get it that short.

All of it in there.

It’s based on this cult book by Joe Hill. That’s an amazing novel. There’s a reason why it’s such a big, best-seller. My first instinct was that I had to make this adaptation and I wanted to make it as truthful to the book. But that would have been like six hours. So when you’re writing the script, we had to find shortcuts and stuff. I think the first version of the movie was like three hours and something. So we managed to cut in under two hours which is really hard to do. Trust me.

Well, it is interesting that you mentioned that.

It’s also, if you look at all my movies, I think there is a great place when you do a movie that is an hour and a half, but the story here was so complex and had so many elements. We are going back in a different time frame, there’s different things happening. We needed screen time to be able to tell the whole story and that’s how we end up. And there’s also something very interesting that more and more blockbusters have that tendency of going like two hours and a half.

I think it’s a good reaction compared to TV. TV has such an amazing amount of time to develop characters. In a movie, you have to do it in less than two hours. Which is always a big challenge. But at least two hours is better than an hour and a half.

Well, in particular you have to do that with a script. Maybe you can get away with a final cut that ends up over two hours but a lot times a studio won’t even be interested in talking about a film like this, which is rated R, if it’s over 120 pages. They know what that translates to in minutes and they don’t want to talk at all. So it’s a very difficult conversation to have, unless you have Daniel Radcliffe in your film. Then I’m sure that makes life a little bit easier as far as financing.

Yeah, and a movie is expensive no matter what. This one I was quite ambitious. There is a lot of things happening. Action, it’s a supernatural movie and it’s also a thriller and there’s a different time frame. Tons of snakes and visual effects, monsters. But at the end, it’s always coming down to the creative choice. You don’t need a movie star to just have a movie star. You need to have the best actor possible for the story. I think Daniel… I can’t imagine anyone else but him to play the character from a book that is a cult book. There is some big pressure on him and myself at the end of this movie because, again, so many people are expecting to see the movie after reading the book.

Have there been changes to the film since its premiere?

We presented the first version at Toronto last year. We did a few changes over the last few months. Then we premiered the movie in Paris and here in the US it is opening on Halloween. But we were at Comic-Con to present the trailer. But we’ve been talking about the movie for a while.

It is interesting that you did bring up TV because it feels like it’s becoming an option now. When you have, specifically, like a 400-page book you can go there. Something like True Detective.

Yeah, True Detective opened a direction that didn’t exist three years ago. These limited series, where it’s not a full season but it’s like five to eight episodes, it’s a great medium and an amazing opportunity for a filmmaker to just make a theatrical film in five hours instead of two, which is great. I would have thought about that if like three or four years ago we had the choice between the two options. It’s not something I would have rejected. No, I never worked in television before. I’m developing a few shows now, but I always only did theatrical films.

I do know there are TV edits of films, whether it’s played on prime time.

Well, a lot of yours have to get cut a lot. And you don’t want any part of that?

I’m completely advocating for the beep and the blur.

I mean, okay, you need to censor the movie playing on TV or whatever. But don’t change the movie. Let people know that you are censoring it. I’m all for blurring images and beeping when there is language.

Instead of cutting whole scenes out.

It messes with the continuity and everything else.

I had the worst experience ever, recently. I was in India and I would switch on the TV. On one of the cable channels, there was Piranha 3D, my last movie, was playing. “Oh, this is interesting. They’re playing Piranha 3D.” Then I realized they cut all the gore, which is half the movie. And then all the nudity, which is another half of the movie. Basically the movie was like 40 minutes. But the worst thing was because they cut so much they didn’t have access to the soundtrack or the music, so they had to cut the music as well. So it was like 45 minutes of nothing with no music.

And I was thinking that in some cases, oh, who cares. Who is watching that? But you’re in India, so you have at least 300 million people watching that channel at that time. It’s just a nightmare. I mean, no one else has that kind of control on not touching the movies too much.

I know you had all this controversy around Piranha because you had to play the trailer off site. They kicked you out of Comic-Con. [Laughs] It was crazy. Did you play an R-rated version of the trailer?

It was weird because we were in the Hall H and it was a big thing for me. First time. Huge. And we were actually supposed to be there with Piranha and I was wondering how it would do because we had a lot of R-rated material in the movie. We picked out one scene but we had to cut out one of the best elements, so we used that almost as a joke with the audience, telling them exactly what they were missing. Which was interesting. It was a great reception. We didn’t have the same problem that Piranha had. Piranha was so treacherous. Which I can understand, but it’s not really fair because now people are attending Comic-Con and are much more ready for gore.

And even the kids love it. So, it changed a bit and needs to. Horns is now available on VOD and in theaters Friday, October 31st.