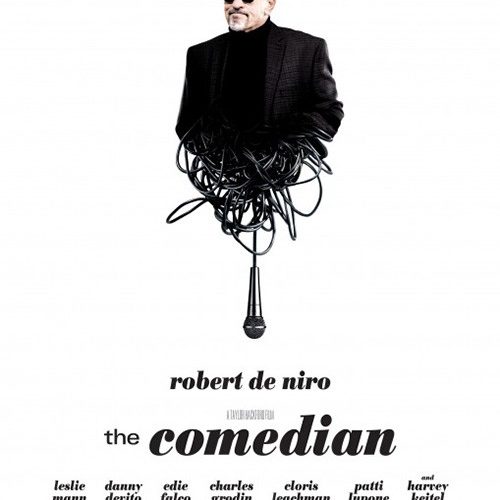 When I consider The Comedian, I’m hard-pressed to articulate just what the movie is. It feels as though over the course of the production, whatever point it was supposed to have got lost, perhaps in the transition from one director or screenplay draft to another. What’s left is an accretion of movie stars and name comedians orbiting a plotless New York travelogue starring Robert De Niro.

De Niro plays Jackie Burke, an aged comedian on hard times, best known for a hacky sitcom he headlined decades ago. After beating up a heckler at a show and spending 30 days in jail, he makes a stab at rebuilding his career, and at the same time romances Harmony (Leslie Mann), a fellow parolee. The various incidences which loosely constitute a story arise from one or both of these threads, as well as an abortive subplot about Jackie reconnecting with his brother (Danny DeVito). It’s too shallow to be a character study, uninterested in saying anything about comedy as a profession, and unconvincing as a romance.

Despite all this, The Comedian might have been salvageable if the namesake character were, you know, funny. But not only is this not the case, the film makes Jackie’s stage presence even more grating by insisting with every frame that he’s brilliant. In-universe, he’s called the greatest shock comic around, but his material is almost wholly inoffensive. (He does a lot of fake-out “Looks like he’s about to say something racist!… Oh no, that was a misdirect! Ho ho ho!” stuff.) This is made even odder by the fact that he never gets much pushback from his audiences over his jokes. The worst he does is raise the ire of his humorless sister-in-law at his niece’s wedding. For the most part, he effortlessly wins over every crowd he meets, from millennials in a comedy club to the elderly in a Florida retirement home.

The Comedian feels mainly like a vanity project for De Niro, who gets to be oh so adored and woo a younger woman. Meanwhile, Edie Falco, Harvey Keitel, Charles Grodin, Cloris Leachman, Billy Crystal, and many others shuffle throughout in either meaningless, mirthless cameos or thankless supporting parts. Director Taylor Hackford brings no visual flair whatsoever – the ugly digital makes this look and feel like it was forgotten by it studio and meant to be dumped straight on HBO. It’s like a feature-length episode of Louie, but without the pathos and unintentionally unfunny.