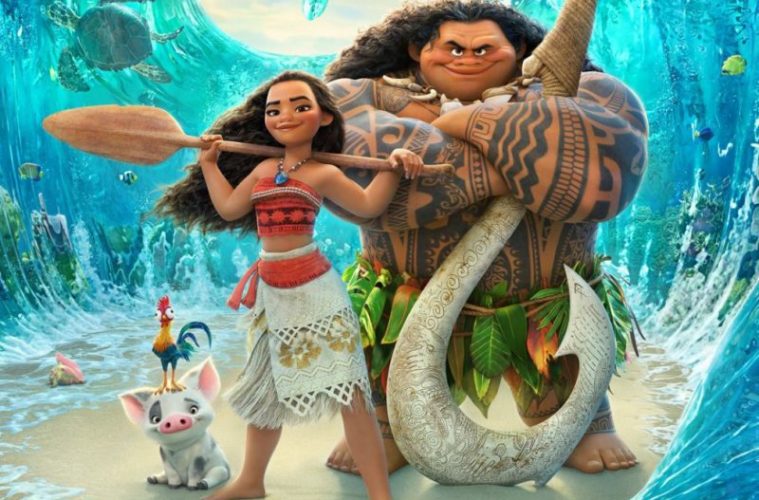 It’s time for another Disney Princess movie, and you know how it goes. Disney knows too, and wants you to know that it knows. When the title character of Moana (Auli’i Cravalho) denies that she’s a princess, claiming that she’s merely the daughter of her island’s chief and the next chieftain, her adventuring partner Maui (Dwayne Johnson) asserts, “Same difference,” and that, “You wear a dress and have an animal sidekick. You’re a princess.” But Disney is doing its best to make the culture rethink cinematic fantasy princesses, countering the stereotypes of helpless femininity (which the studio largely put in place) with a new roster of highly capable action heroines. And Moana is, as they call it, a good role model. And the movie around her is fine.

One big leg up that Moana has on other recent Disney fare, and a lot of computer-animated films in general, is that its Polynesian setting has let its artists and animators concoct some distinct imagery outside the sphere of Western-based complacence. (I’m thinking specifically of the generic styles of Tangled and Frozen – movies you could swap shots between without noticing.) The swirling visual calligraphy of Pacific art and iconography, along with the focus on organic and natural elements like trees and the ocean, gives the film an aesthetic centered on roundness and fluidity. This is ideal for the hyper-fast motion of computer animation. The film’s four directors/co-directors (Ron Clements, John Musker, Don Hall, and Chris Williams) are all Disney veterans with a specialty in films whose greatest strengths lay in movement (their collective resume includes The Emperor’s New Groove and Tarzan, for example). This is one of the better-directed CG films in the Disney canon.

But next to all the solid noisy bits, Disney still demonstrates trouble in slowing down properly. It still boggles my mind that nearly all the studio’s directors venerate the work of Studio Ghibli and Hayao Miyazaki (there are a horde of masked coconut beasties in this film which are clear homages to the kodama of Princess Mononoke), yet can’t find time in their own films to simply appreciate silence or stillness for a minute or so. Musical numbers end with zero buffer before the next sequence. It’s supposed to be energizing but is instead exhausting.

That the film is 100 minutes long, moves at such a clip, and yet contains relatively little incident is strange. It takes entirely too long for Moana to haul ass off her home island to get on with her world-saving quest. Said world consists of precisely seven named characters, a lot of generic extras, and one island of note, which severely hurts the feeling that there are any real stakes to this conflict. Moana doesn’t link up with her demigod partner Maui until around halfway through, and they have one side adventure before sailing in on their end goal. This does not create the feeling of a full journey. Along the way, both Moana and Maui have token worries about whether they’re believing in themselves enough – arcs which are resolved exactly as one would expect (pep talks, last-minute changes of heart, etc).

Johnson and the newcomer Cravalho are both strong voice actors, Johnson using his pro wrestling bravado to delightful effect with the bigheaded Maui. Cravalho is a talented singer as well, and the core of the film’s best musical moments. (Johnson is, sadly, less talented at singing. Yes, we’ve found a crack in The Rock.) But their interaction, while fun, is strangely scripted. This has been a recurring problem for Disney since at least Tangled, but hearing characters in an old-world fantasy setting speaking in a modern patter, sometimes with contemporary slang, is jarring. At one point, Maui compares the film’s MacGuffin to a “homing beacon,” which is just sloppy. (And the less said about the “tweeting” joke, the better.)

This hearkens to the larger problem of Disneyfication – of collapsing all cultures into one vaguely Americanized sensibility. Though Moana draws its look from Polynesia and pays lip service to Pacific seafaring culture, it feels less like a truly Polynesian story than it does a generic Disney story slotted into a new setting. Again, this isn’t a problem specific to Moana. Since its ‘90s “renaissance,” Disney’s fairy tales have typically rotated a formula through various countries rather than venture too far.

This is best exemplified by the songs, which are for the most part Disney Broadway pop through and through, with some drums and chants added in for flavor. Said songs (from Lin-Manuel Miranda, Opetaia Foa’i, and Mark Mancina) are alright, though only one or two feel like they could break out (most likely the “I Want” power ballad “How Far I’ll Go”). That’s the level at which Moana operates: some stand-out aspects, but mostly another Disney Princess movie.

Moana premiered at AFI Fest 2016 and opens nationwide on November 23.