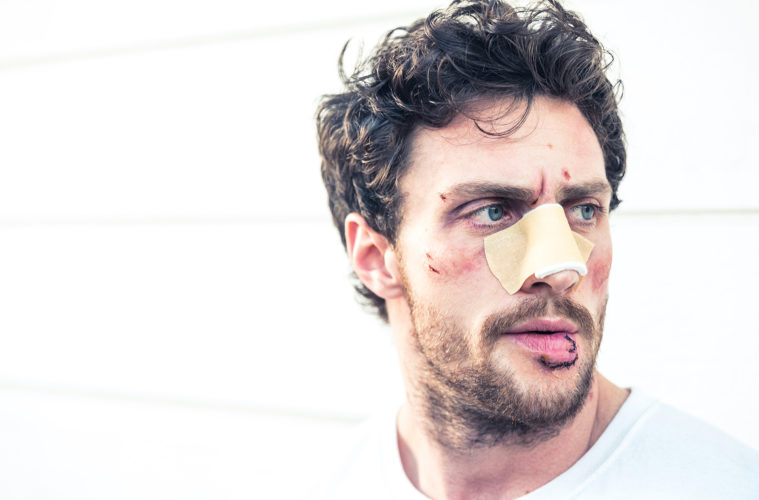 ‘A Million Little Pieces’ Review: Adaptation of Notorious Bestseller is Bound by Shortcomings

During the ensuing fallout once James Frey’s memoir A Million Little Pieces was exposed as a fabrication well beyond his statement admitting to having altered “small details” of his past, it was discovered that the author had tried getting it published as fiction to no avail. Random House, the place that ultimately printed it and watched its ascent to the number one bestseller slot thanks to a coveted spot on Oprah Winfrey’s Book Club list, was supposedly one of the establishments that rejected it back then too. The reason is simple: nothing that happens is unique to what we’ve already read or seen before countless other times. What finally made it worthwhile was the veracity it couldn’t uphold. Cliché can be forgiven if born from truth. This wasn’t.

What does that mean for a cinematic adaptation from wife and husband duo Sam Taylor-Johnson (director and co-writer) and Aaron Taylor-Johnson (co-writer and star)? Besides possessing the dramatic gravitas to provide a platform for the latter to showcase his talents, it’s easier to see the result as a product of the controversy rather than a faithful adaptation of the material itself. Without honesty to dispel any trepidation about narrative convenience and tragic sentimentalism, what makes James’ (Taylor-Johnson) journey worthwhile as a story that needs to be told? Is it his demons? The fact a doctor doesn’t know how he’s walking let alone alive after what heavy narcotics use did to his body? Or the relationships made during recovery like clandestine girlfriend Lilly (Odessa Young) or unlikely father figure Leonard (Billy Bob Thornton)?

The soundest argument to be made is an answer of none of the above. By not being real, it just becomes a string of manipulations. A more interesting film would therefore be one that cuts between reality and lie—Frey as author and addict colliding in ways that show how the lie was a coping mechanism to hide from reality rather than become its literal replacement. That a film was made at all also risks condoning what he did because it inevitably erases the deception by supplying a second opportunity wherein lie stands-in as truth again. Doing this doesn’t reward the art as much as its creator because switching mediums only re-ignites the desire to demand sympathy as though fully aware it can’t earn it outright. It’s correct in that assessment, though, since it’s impossible to invest in what’s happening to James when those who play a part in his recovery of body, mind, and soul are all so fleeting. The doctor (Juliette Lewis) is an afterthought who appears only to push him towards discovering something on his own. His supervisor (Dash Mihok) does more to prove why he shouldn’t listen to anyone employed at the facility than help guide him forward. And David Dastmalchian’s Roy and Charles Parnell’s Miles never achieve the payoff that their inclusion teases. Even James’ brother Bob (Charlie Hunnam) is relegated to being a symbol of what he will lose or reclaim depending on the outcome of his rehabilitation. They’re all noise surrounding his real hero: himself.

Maybe A Million Little Pieces‘ goal is to show an addict’s inner strength can overcome his/her suffering. That’s the only way I see it being a success since that’s what’s sold. I’m not saying Lilly and Leonard aren’t a huge part of James’ potential salvation. They just don’t save him as much as give him a reason to save himself. He doesn’t want to listen to the professionals (even though all are recovering addicts themselves) and he surely won’t think about listening to a priest (a necessity to completing Step Five of Twelve). But maybe if he serves as his own sponsor after discovering human life has value, he’ll finally listen to reason. James is thus selfish to the point where even his selfless deeds benefit him first.

That decision by Frey is somewhat unique when most stories on this topic eventually let their broken souls be saved by the professionals. The film therefore becomes a proponent of the “steps” while simultaneously exposing how damaging their origin in Catholicism can be for those who vehemently oppose doing anything for God. I don’t think the film goes into that deep enough to let it shine above the usual tropes of creating inventories and confronting the past, but it’s interesting to see how addicts who aren’t quite at one hundred percent themselves can help others in order to reach their own closure. Leonard’s “paying it forward” mentality is heartfelt and his rapport with James sweetly endearing in its vulgar sarcasm. Alternative modes of treatment can be effective. The story almost becomes a glimpse at hope specifically aimed at atheists because it lets James reject the entirety of what he needs before finding those same things anyway on his terms. I only wish it fully embraced this conflict and talked about the parallel paths forward more than simply letting him be a jerk to those on one side and mildly accepting of the other. The difference between the two is so minuscule that you also begin to resent him and what appears to be an intentional desire to be obtuse via temper tantrum. Leonard says doing this saved him? Okay, I’ll try it. Wait I have to talk to a priest? Screw that. I’m going to brood in my corner instead. His willful self-sabotaging proves frustrating.

I don’t fault the Taylor-Johnsons, though. They’re bound to these shortcomings because the text’s drama is born solely from James’ fear while everyone around him distracts from the redundancy of that truth. The direction is very good with some memorable scenes (especially a suicide filmed with emotional and visual sensitivity) and the acting is superb across the board. But that stuff only takes you so far when a lack of narrative intrigue makes it difficult to care. The big stakes lie with the supporting characters yet only one actually finds payoff. And by the end James (and the story) seems to forget them all by having them leave so abruptly. It’s tough to then accept their impact when the work is so intent on saying he succeeded (or failed) alone.