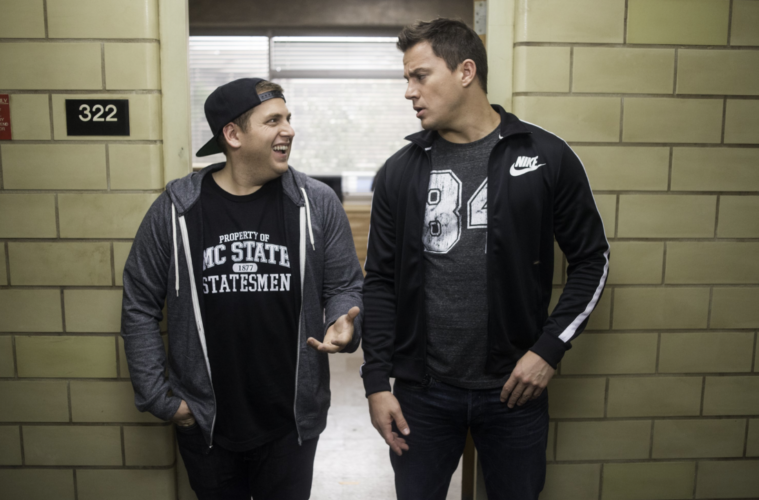 Two years ago, Phil Lord and Christopher Miller made their live-action film debut with 21 Jump Street. The directing duo embraced the possible indifference towards a reboot of a bygone TV procedural and built a frenetic and entertaining work around their leads Jonah Hill and Channing Tatum. Jump Street, like their follow up The Lego Movie, surpassed all critical and commercial expectations.

22 Jump Street, opening this Friday, presents a new set of challenges for the ensemble, particularly how exactly to make a sequel to a reboot work. I had the chance to sit down with the directors, as well as cast members Jonah Hill and Channing Tatum for separate roundtables. Including respecting the audience, acting methods, animation vs. live-action, and much more, below is an overview of what I learned.

On the jump from animation to live-action (and back again)

Although the processes are different, Lord and Miller’s primary objective is to tell a story well with good characters. Lord quickly noticed, however, the difference between the extroverts that populated the set of their live-action films and the introverted artists that helped realized The LEGO Movie, saying when working on the animation it dawned on him, “Oh, right. These are my people. This is what I relate to.” The quality of both these projects is impressive considering that production on 22 Jump Street and The LEGO Movie overlapped.

Lord added, “It was especially hard when we were on the set of 22 and working long hours and then coming home for the daytime in Australia [where The LEGO Movie was created] in the middle of the night and having conference calls and reviewing lighting dailies on our iPad and never sleeping. So that was particularly challenging. I wouldn’t want to do that again.”

The directors attribute their twenty-plus-year friendship, dating back to their freshmen year at Dartmouth College (they revisited the experience at UCLA for research on this film), as the much-needed camaraderie that keeps them prolific. The two expanded on the unique process of directing as a pair, including detailed conversations about the intent and focus of each scene happening as the script is being written so that there is a shared objective on set. The two also share touchstone works like Harold and Maude, the films of Billy Wilder, and Young Frankenstein as guiding examples of how they shape their comedy. Finding challenges as an actor

A defining aspect of 21 and 22 Jump Street is that the lead actors are involved behind the scenes. Both Hill and Tatum are credited as producers on these films and have used their clout to attract celebrity friends for cameos, as well as steering the tone and character arcs of both films. For Hill, rebooting Jump Street has been a passion project dating back years. He began writing the first film at the age of twenty-three while still living at his parents home. Although both actors have ventured into more serious roles (Hill in Moneyball and The Wolf of Wall Street and Tatum in the upcoming Foxcatcher), Jump Street utilizes a variety of skills that the actors don’t often get to employee.

The jump back to straight comedy is not as difficult as one would imagine, as Tatum says, “It’s not really about re-learning because I had to sort of learn how to let go on the first one and leave it up to the Gods or Chris and Phil. I had no ego going into it and I generally don’t on any movie, really, because the best idea in the room wins. You just have to step up to the plate and swing as hard as you can. Try to keep growing and try to keep taking parts that challenge you and movies that aren’t some derivative version of a movie that you’ve already done.”

Commenting on producing the film, Hill adds, “As an actor, you’re really working for [the director]. You’re really servicing their vision. With Phil and Chris, who I think are visionaries as well, you are doing the same, but with this you’re actually not just playing your part, you’re also working on the movie being good on the whole. If I’m doing Wolf of Wall Street, I’m only focusing on what I’m doing in that scene in that moment. I don’t have to think about anything else because Martin Scorsese is thinking about everything and he’s the best. With this it’s cool to think about things. When we were writing the script I get to think about where Channing’s character is coming from, where is he now, three years later. That’s cool. You get to expand your presence within a movie and that’s exciting.” One of the strongest aspects of the franchise is the chemistry between the two, which they expanded on during the discussion. Tatum says, “I love Jonah. I mean, I really do love him. He’s my sweetie. I’m not kidding, he’s taken care of me in a lot of ways. We’re just really quick friends, he reminds me of a lot of guys I grew up with and we’ll be kicking it for a long time, movies or not movies.”

Hill adds,”I think our friendship is why you feel that on screen. I don’t think you can artificially create that in a way over two movies. And that comes with real friendship like the way you butt heads, as well as the way you are besties and have the greatest time ever. That’s why it’s a real friendship and it’s not like just some false, ‘Hey buddy, high five. I’ll see you in the next town’ sort of thing. It’s real, honest friendship and I’m proud to be a part of it.”

As for Miller and Lord, who have a chemistry all their own, when it comes to conflicts, Lord says, “Like many men, our strategy is to get pissed off, walk away, and then never speak of it again.” Miller adds with a laugh, “It works!”

On the surprise performance that outdid Jonah Hill

While the returning supporting cast all get plenty off laughs in the film, one will certainly come away talking about Jillian Bell. The Workaholics star has some of the best scenes in the movie, and the directors agree, saying, “Jillian and Jonah’s fight is so special. It grew into something even crazier than we thought, that idea of what if she tries to kiss him. It’s something we all came up with on set after a couple of takes, it obviously turned into something crazy. It was just them improvising that idea with eachother and having two really gifted comic performers just take it on.”

On her casting, Lord says, “I think she came in three different times and we were reading a million people. She just was so good every time that we just tried to find something great for her.” Miller adds, “It was the first time we’d ever seen Jonah on his heels, where she was faster than him. It’s pretty impressive because Jonah is one of the best improvisers anyone has ever seen.” “You can see it in the movie,” Lord says with a laugh. On not talking down to the audience

When asked if their comedy is too obscure, the directors don’t think so. Miller jokes, “Kids love Annie Hall!,” referencing one of the recurring gags in the film. He says, “We’re trying to make ourselves laugh and some of that stuff only a small percentage of the audiences gets, it’s kind of fun, if you’re one of the people that gets it, you’re part of the club. If it goes by quickly and it doesn’t sit there like it was a big swing, then you can sort of get away with it.”

He adds, “It was our same theory with The LEGO Movie. When we were kids and we watched a Bugs Bunny cartoon there would be a Humphrey Bogart reference.” Lord says, “And that goes right over your head as a kid. A lot of people, a lot of executives, that scares them. They’d say, ‘Oh, kids aren’t going to get that’ to which we say, ‘It doesn’t matter as long as they are engaged.’ Kids are spending their entire life not getting what’s going on and trying to figure it out, solving the mystery. Unlike adults, they like that. They’re curious and they live in a world where there is things they don’t know.” Lord concludes, “It’s been our philosophy to not talk down to the audience.”

From the earliest draft of the script, 22 Jump Street‘s core idea is that a sequel to a movie is like a sequel to a relationship. “How do you reenact your first date? Or the time you first fell in love with somebody? How can these two guys, who fell in love in the first movie, sustain that relationship?,” Miller asks.

The awareness that sequels are often inferior is omnipresent in the film. Nick Offerman returns as Deputy Hardy and has a lengthy and meta rant about how the first 21 Jump Street was an unexpected success so the department has decided to blindly throw more money to the followup endeavor. “Making a sequel is hard and making a comedy sequel is extra hard,” Miller adds, because of the demand to replicate past success. He concludes with crafting the script, “it was a lot of us just frustrated about how hard it was to make a sequel.”