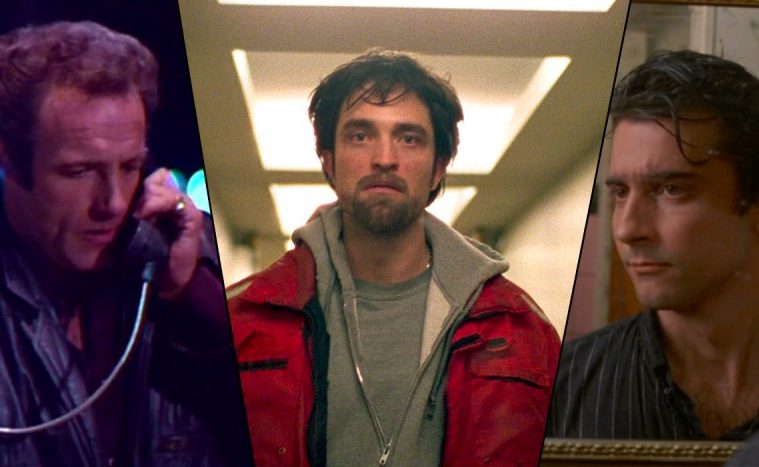 In their feature films, directors Josh and Ben Safdie have always walked a fine line between fact and fiction. Not quite documentaries and not quite traditional narratives, their work takes on an air of alarming spontaneity, threatening to jump off the screen at you. Between Daddy Longlegs and Heaven Knows What, the Safdies captured a gorgeously grainy snapshot of their home city of New York, both painfully truthful and deeply impacting.

Their latest, Good Time, returns to New York City, this time bringing a pulp edge to their naturalistic aesthetic. After a botched bank robbery lands his brother Nick (Ben Safdie) in jail, Constantine (Robert Pattinson) is forced out of Queens into the city to bring his brother home, at any cost.

Our review describes Good Time as “in parts a heist movie (iconic masks included) and a chase movie, but not an homage in any sense — more an evolution, like a 21st-century fast-food hybrid that mixes trash television and drug culture with Day-Glo-splattered night-time cinematography and throbbing synthesizers, thanks to a standout score from Oneohtrix Point Never.”

To honor the occasion, we’ve assembled eleven fantastic films to check out before or after seeing Good Time. Check out the list below and feel free to suggest your own recommendations in the comments. While Malik is serving six years for assaulting a police officer, he admits to another inmate that he can’t read. The inmate suggests learning while in prison: “The idea is to get out of here a little smarter.” Our brutal, assembly-line prison system irrevocably transforms people, altering their lives in unimaginable ways, with true rehabilitation the least traveled route in many cases. Raised in a Youth Center, Malik’s institutionalized life only takes shape after he’s inducted into a Corsican prison gang, giving him strength and purpose for the first time. Comparable to Martin Scorsese’s essential Goodfellas, A Prophet follows a lowly pawn used and abused by a vast criminal organization, until he learns how to use them for his own gain. An unsuccessful first-date morphs into a frenzied, Kafka-esque race for survival as one New Yorker attempts to accomplish the impossible: getting home from SoHo after a long night. Taunting twists of fate push our hero deeper into the city, endowing the film’s title with an otherworldly mood; after hours, the landscape becomes a hellish nocturnal mind-game. Boasting a stunning cast, including Teri Garr, Rosanna Arquette and John Heard, After Hours is anchored by a career-best performance from Griffin Dunne. Director Martin Scorsese (who won Best Director prize at Cannes for the film) renders every sequence simultaneously hysterically funny and jarringly nerve-shredding, creating a delirious exploration of ‘80s urban schadenfreude. A Cleveland hitman, Frankie Bono, finds himself in New York City for Christmas, tasked with killing a mid-level mobster. He hears carolers singing “Silent Night” as the voice in his head poetically urges him on, like a co-dependent Raymond Chandler, to complete this unpleasant job. As the narration informs us, Bono is a loner, but after running into an old friend, he finds unexpected warmth in the cold city, if only for a short time. Allen Baron’s Blast of Silence captures a period snapshot of New York with the same faded glow as John Cassavettes’s Shadows, released only a year before. Shot on a meager budget of $20,000, the incredibly resonance of Baron’s film is a testament to Meyer Kupferman’s thrilling jazz score and Waldo Salt’s riveting narration, voiced by an uncredited Lionel Stander. In the wake of his tenure in the Twilight saga, Robert Pattinson could have followed in the footsteps of so many young actors, chasing blockbusters. Instead, he took to chasing great filmmakers, such as David Cronenberg. Pattinson’s role in the adaptation of Don DeLillo’s Cosmopolis hums with beautifully precise humor, endowed by director Cronenberg’s careful attention to detail. The protagonist’s sleek white limo is gradually reduced from its ivory perfection to a graffiti covered mess. The film’s overall look mirrors that of the limo: the story begins in Packer’s world, a gorgeous place where everything is sleek, new and top of the line, and ends in dank, grungy squalor. While bearing none of Cronenberg’s body-horror visual hallmarks, Cosmopolis is a chillingly calculated film, and amongst the director’s most mature works. Volatility lies at the center of Drunken Angel. Two volatile personalities clash: equally stubborn and frustrated men who demand the world follow by their rules. A shamed doctor, working in squalor, gives a yakuza boss a troubling diagnosis. The hardened criminal is deeply shaken, drinking his worries away against the doctor’s orders. While the doctor admonishes him for his drunkenness, he himself dilutes rubbing alcohol with water, hiding his own alcoholism as best he can. Akira Kurosawa’s mournful and tender film depicts a world reeling in the aftermath of the war, attempting to carry on without any sign of hope. These lost and broken souls cannot redeem themselves in such a poisonous world, but a drunken angel sees a glimmer of hope for the next generation, as faint as that light may be. Two gunrunners lament their flagging finances. Shaking his head, one asks: “You still writing?” The other replies: “No, that was before I heard about making money.” Peter Yates’s The Friends of Eddie Coyle explores the life of the working-class criminal with a sad sincerity. Eddie Coyle (Robert Mitchum) is a low-level criminal looking at three to five years in jail for a job he pulled for the equally impoverished Dillon (Peter Boyle), who runs a Boston bar. Coyle is a “stand-up guy,” but he worries what will become of his family, forced onto welfare in his absence. Meanwhile, Dillon can’t even afford a car, relying on $20 a week from an ATF agent to whom he rats out his best friends for immunity. Adapted from a novel by George V. Higgins (Killing Them Softly), The Friends of Eddie Coyle is an elegy to the hard-working criminal, working-joes who live and die by an imaginary code of honor. A searing portrait of the madness of love on the pungent streets of New York City, Heaven Knows What follows Harley (Arielle Holmes), a homeless heroin addict who is head over heels for Illya (a nearly unrecognizable Caleb Landry Jones). He’s monstrous and bigger-than-life, pushing Harley away and then dragging her back again, a sickeningly dominant figure in her life. The film is almost a neo-realist take on Leos Carax’s The Lovers on the Bridge, subverted by Isao Tomita’s Moog synthesizer recordings of the work of composer Claude Debussy. Josh and Ben Safdie’s breakthrough film illuminates the interior and exterior struggles of a largely ignored subculture with unbearable clarity and heartbreaking sympathy.

The Killing of a Chinese Bookie (John Cassavettes) Cosmo Vittelli (Ben Gazzarra) might seem as faded and worn as his striptease club, but there’s still life in him yet. While drunks call out for the next act, Cosmo takes to the microphone to explain that he picks and choreographs each dance number himself, existing in a sleazy world far removed from the showbiz glitz he attempts to project. He claims to have style where others lack it, but ostentatiously drags three dates, complete with an orchid corsage for each girl, to a scuzzy poker game where he loses everything, much to their embarrassment and his misfortune. In debt $23,000 to the mob, Cosmo is given a chance to reduce what he owes in exchange for killing a bookie – a small-time player, or so he’s told. But even as he’s preparing to complete the hit, Cosmo still stops to call to check in on the club. Even with a murder on his plate, for Cosmo Vittelli, the show must go on. Perhaps the bleakest film noir ever made, Robert Aldrich’s Kiss Me Deadly is an apocalyptic nightmare in stark black and white, sprung from the iconic mind of Mickey Spillane. After muckraking private eye Mike Hammer picks up a desperate hitchhiker on a lonely desert road, he’s ensnared in a twisted case involving a dangerous conspiracy and a mysterious box. Brutal and intimidating, Ralph Meeker’s imposing performance as Hammer adds a viciousness to the already violent, hard-hitting film noir aesthetic. It’s astounding to learn that Kiss Me Deadly’s unforgettably nihilistic ending was altered to make it even darker by cutting roughly a minute from the final scene, footage which was luckily restored for the DVD release. Much of the film’s unsettling impact stems from witnessing the film’s gritty pulp plot mutate into hellish, sci-fi horror before our eyes with magnetic and engrossing force. Two jobless drifters with opposing philosophies partner up to open a car wash in Pittsburgh: Max (Gene Hackman) accurately describes himself as “the meanest son of a bitch alive,” while Lionel (Al Pacino) takes satisfaction from spreading joy and laughter. After nine years in San Quentin, Max has dreamed and planned every inch of his car wash, recording the details in a notebook. With each entry, his frustration with his lowly place in life grows stronger. Lionel just wants to get home and meet his child, whom he’s never seen, after six years at sea. But money is hard to come by and luck even harder for these two wayward fools, one quarrelsome and miserable, the other innocent, but doomed. Director Jerry Schatzberg (Panic in Needle Park) created a marvelous and tragic portrait of the aimless dreamer, shot through an exquisitely smoky haze by cinematographer Vilmos Zsigmond. Frank (James Caan) is a career criminal whose time spent in prison shaped his life and philosophies in unthinkable ways. While sentenced to a short prison term, he killed another prisoner in a defensive act, an action which extended his time behind bars even longer. Back on the street after years of confinement, Frank hungers for a real life – a wife and even some kids. But soon, he’s under the thumb of a contemptible gangster, who demands Frank work for him. A survivor above all else, Frank is forced to make a terrible choice. His fury is palpable as he hastily throws gasoline over his life, before defiantly lighting a match and walking away. In Thief, director Michael Mann’s theatrical debut, he crafted a coldly gripping examination of the criminal mind, a man willing to violently disassemble his entire world in order to stay ahead of the heat.

Good Time is now in limited release and expanding in the weeks to come.