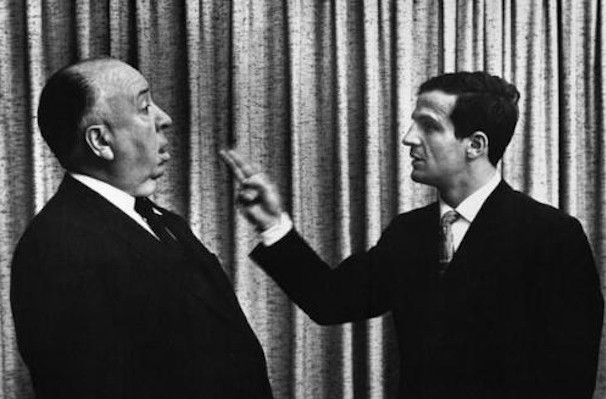 In 1962, two filmmakers met in a room at Universal Studios to discuss (what else?) cinema. Those directors were François Truffaut and Alfred Hitchcock. (Providing assistance was French-language translator Helen Scott.) Together, they talked for over 50 hours, poring over every film the old master ever made. In 1967, Truffaut published what has universally come to be known as an essential text, titled Hitchcock/Truffaut, which contains rich and detailed transcripts of the extraordinary conversation.

Filmmaker Kent Jones‘ documentary about this historic meeting of the minds is now out, which inspired The Film Stage to look back at some of the forgotten, overlooked, and underrated films from these two beloved directors. The following ten titles contain all of the nuance, mystery and joy that we’ve come to expect from Hitchcock and Truffaut, with many overlapping themes and stylistic sensibilities.

Please enjoy the list, and don’t forget to suggest your own favorites in the comments. One can also read our extensive talk with Jones here.

In Bed & Board, Truffaut returns for the fourth time to the character of Antoine Doinel (Jean-Pierre Léaud) whom we first met in The 400 Blows. At this point, Doinel is living a version of ideal marital bliss with his wife, Christine (Claude Jade) in an apartment complex overflowing with oddballs. After the birth of their first child, Doniel’s mind wanders, and he finds himself in bed with a lovely Japanese woman who he meets through work. Truffaut includes wonderfully peculiar episodic digressions, such as the chemical dyeing of flowers, and a creepy neighbor referred to as The Strangler, for no narrative purpose other than thematic and comedic embellishment. Not the only film on this list to examine the aftermath of infidelity, but certainly the most optimistic, Bed & Board is Truffaut at his most giddy and free-wheeling.

In Nazi-occupied France, Lucas Steiner (Heinz Bennent), a Jewish theater director, is forced to hide out in the basement of his own theater, leaving his gentile wife, Marion (Catherine Deneuve), to run the show in his absence. Even as history turns dark for France, Truffaut still manages to enliven the narrative with a feeling of mischievous humor and magic through his trademark sea of lovable supporting characters. The film is equally steeped in a gradually mounting sense of claustrophobic dread as the Germans tighten their grip on the city of lights.With the ensuing war juxtaposed against the play’s lively backstage drama, The Last Metro is a hopeful and life-affirming survivor’s tale, as well as a heartfelt ode to the enduring power of art.

Charlie (Charles Aznavour) is a former concert pianist reduced to hiding from the world and playing piano in a local bar after his wife’s suicide. Blaming himself for her death, he retreats inside a shell of shyness and silence, letting the music speak for him. One night, his lowlife brother shows up, hoping to lose two pursuing gangsters. Charlie assists him, an act which ensnares himself and Lena (Marie Dubois), his new object of affection, in a life-threatening situation. Only Truffaut could spin such a textbook noir narrative into a cheeky comedy centering on themes of doomed love and familial loyalty. As Hitchcock/ Truffaut director Kent Jones points out, in an essay for Criterion, “[H]is high-velocity storytelling is intimately tied to the feeling of impending mortality, the sense of every given moment in time coming and going, never to return.” Decisions cannot be undone or mistakes unmade, a heartbreaking lesson which Charlie learns and relearns. But at least he can always return to that dusty old piano.

The Soft Skin is a profound cautionary tale of infidelity told from both the objectified female and their thoughtless male counterpart. A writer Pierre (Jean Desailly) begins an extramarital affair with an attractive air hostess, Nicole (Catherine Deneuve‘s sister, Françoise Dorléac), which eventually snowballs into a relationship. On a trip out of town, the writer encounters an acquaintance with whom the affair cannot be disclosed, forcing Pierre to treat Nicole as if she was a stranger, heartlessly used when needed and ignored whenever convenient. Climaxing with a scene of stark, almost leisurely violence, the final shot is so bleak and defiant, it’s a wonder that it isn’t as well known as the finale of The 400 Blows. More sincere emotional drama than sprightly comedy, The Soft Skin stands out as a bleak entry in Truffaut’s otherwise uplifting filmography.

Truffaut’s touchingly simple The Wild Child contains a powerful and evocative performance by Jean-Pierre Cargol, whose role truly transcends the medium of film acting. Unlike Jean-Pierre Léaud, who collaborated with Truffaut so many times, Cargol will be remembered for this single performance as Victor of Aveyron, a feral child found in a forest in 1797. This remarkable true story is dramatized with surprising restraint as Néstor Almendros‘ camera often remains at a distance from its subject, watching as the boy gallops on all fours, joyful in the falling rain. The black-and-white photography possesses a hazy, dreamlike quality, which is offset by Truffaut’s whimsical use of Vivaldi, here arranged by composer Antoine Duhamel. The Wild Child is dedicated to Léaud and pays stunning tribute to the mentor-protegee relationship.

Despite being made over four decades ago, Hitchcock’s penultimate film, Frenzy, has hardly aged a day. The liberal use of sex, violence, and nudity positions it as the most abundantly graphic and adult entry in the master’s filmography. Robert Rusk (Barry Foster), a London serial killer, stumbles into an opportunity to frame someone for his crimes: his best friend, former military man Richard Blaney (Jon Finch). Told with a deliciously morbid sense of humor from a screenplay by Anthony Schaffer (Sleuth, The Wicker Man), Frenzy is a prime example of Hitchcock at the very top of his game, playfully toying with his wrongfully accused protagonist in marvelous and unexpectedly devilish ways. Just when you think you know what comes next, Hitchcock pulls the rug out and forces his hero back into a corner. Not for all tastes, nor the faint of heart, Frenzy is Hitch at his most vicious.

Marnie, a career thief (Tippi Hedren), is blackmailed into marriage and pseudo-rehabilitation by her wealthy employer (Sean Connery) in this splendidly psychosexual tale of pain and redemption. Marnie is as dangerous and unpredictable as any of Hitchcock’s femme fatales, yet the film stands out from Hitchcock’s filmography due mainly to its coldness and luridity, as Hedren’s titular protagonist becomes trapped and cornered by the commanding Connery. It’s a fine illustration of the director’s ability to portray characters silently thinking to themselves, conniving and plotting, conveying their thoughts visually with a morbid attention to detail. Marnie‘s twisted, dreamlike narrative is less conventional than much of Hitchcock’s work, which makes it all the more notable.

Best known for its use of long takes and editing which makes it appear as if the film is playing out in one shot, Rope is a slyly comic tale of a Leopold-and-Loeb-like duo of upper-class killers. They conceive to commit the perfect murder for no reason other than the sheer thrill of the crime. After strangling their victim and placing him inside a wooden box, they throw a party at the scene of the crime, inviting, among others, the parents of the victim over for drinks and small talk. It’s a stylistically theatrical picture inspired by a play by Patrick Hamilton, and Hitchcock personally derided the final result. (David Fincher would agree.) While it is far from Vertigo or Spellbound, Hitchcock’s ever-moving camera elegantly captures the ensuing drama with a morbid irreverence, roving around the elaborate set, daring our fiendish anti-heroes to crack. Rope is an example of Hitchcock at his most confident and assured, a technical experiment contemporary filmmakers are still attempting to execute.

When Lena (Joan Fontaine, who won an Academy Award for her role) falls in love with Johnnie (Cary Grant), her father disapproves. This doesn’t stop them from running off to get married, thus beginning a downward slide for Lena, as her trust in her new husband slowly dissolves with each passing lie. As it turns out, Johnnie is a shiftless, unemployable gambler fibbing his way out of each hole into which he digs himself. Soon, Lena begins to fear for her life and the lives of those around her as Johnnie’s duplicitous nature and enthusiasm for murder novels suddenly assume a less-than-innocuous air. Despite ending with a tonally unusual plot twist, Suspicion is nonetheless a charming and marvelously engrossing example of the director’s early Hollywood fare.

One morning, a precocious child discovers a corpse in the woods near his tiny provincial town. Another person discovers the body, followed by yet another person, and soon the trouble with Harry begins. The body in question, which formerly belonged to a man named Harry, may have been accidentally killed by a bullet from Captain Wiles, who was hunting rabbits. Or perhaps not. Over the course of this macabre romantic comedy, Harry’s body will be repeatedly buried and reburied, all while love blossoms between two couples, one old and the other young, brought together by the aforementioned trouble. As Hitchcock’s only true comedy, The Trouble with Harry is notable for its uncanny ability to find lifelike humor in its characters, as well as this ghastly, ever-worsening situation.

What’s your favorite underseen film from both Hitchcock and Truffaut?