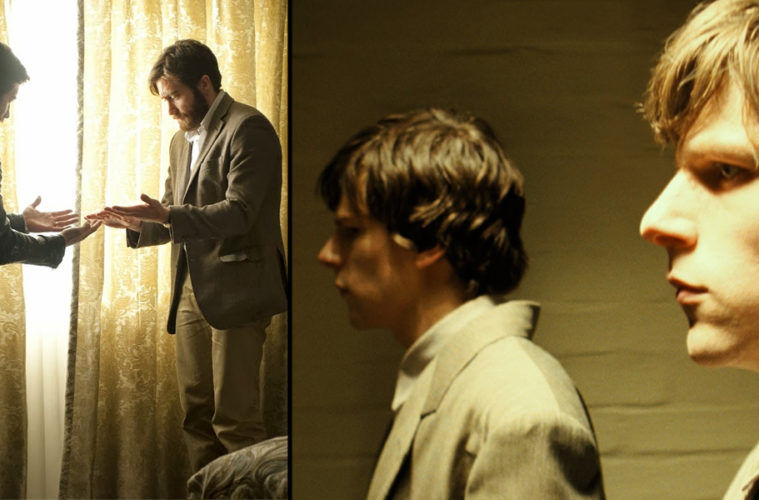 10 Essential Doppelgänger Films to Watch Before ‘Enemy’ and ‘The Double’ Describing the source material for Denis Villeneuve‘s Enemy, we said it’s a straight-forward tale of doppelgänger; “There’s the alpha, the pushover, and the innocent victims caught between; the insanity of seeing an exact replica in the flesh paired with the infinite possibilities such a discovery could mean. One is married; one has a girlfriend. The latter injects himself into the former’s world through curiosity, the first into the second’s purely for unfounded revenge and sexual desire. They exist together without looking deeper into what they are, pushing forward along a path of self-destruction you can see coming a mile away, and yet still find yourself captivated through the actions of those left from the wreckage.”

However, the latest film from the Prisoners director manages to push things even further, and to celebrate its release this weekend, we’ve taken a look at other films in the sub-genre that do the same. While we’ve seen recent features such as Black Swan, The Prestige, and Moon explore this theme with admirable results, we’ve highlighted ten works, from pioneering shorts to swan songs to the greatest film of all-time (according to some), that serve as essential groundwork for the topic of doppelgänger. Ahead of Villeneuve’s film arriving this weekend and Richard Ayoade‘s The Double (our review) coming in May, check out the list below and chime in with your favorites.

The most recently released feature on this list is also one of the most distinctive. Whereas this weekend’s release, and a number of features mentioned here, find our leads experiencing a sort of palpable dread when they encounter their doppelgänger, Charlie Kaufman’s twin Donald Kaufman (both portrayed by Nicolas Cage, in perhaps his best performance(s)) has seemingly been a part of his psyche (or not, depending on your interpretation) all of his life. Initially played in a humorous, neurotic fashion as Donald represents a more commercial half, the eventual relationship does inevitably break apart in a horrific way. Diving deeper into the meta, Donald Kaufman is even credited as the co-writer of the film, the first fictional character to earn an Oscar nomination. – Jordan R.

David Cronenberg gave us two Jeremy Irons in this medical psycho-horror piece about an unusual sibling bond. Inspired by the true story of Stewart and Cyril Marcus, the surreal setup follows identical twin brothers Elliot and Beverly Mantle, respected gynecologists who fall apart both mentally and professionally when one of them falls for a beautiful patient (played by Canadian actress Geneviève Bujold). Irons tackled the challenge of playing two characters, the manipulative Elliot and the sensitive Beverly, thanks to a little method acting – it’s said that he requested two dressing rooms and used them respectively depending on who he was playing. His excellent dual performance serves as the centerpiece to an unforgettable film fraught with the signature Cronenberg themes of invasive body horror (the surgical scenes are a woman’s worst nightmare) and sexual depravity. – Amanda W.

On the surface, it’s the story of Weronika and Véronique (both played by Irène Jacob). Just beneath that, it’s about the connection music creates between two unrelated people. By extension, Double Life becomes an operatic ode to life and art, perhaps the greatest achievement of Krzysztof Kieślowski’s longtime DP, Sławomir Idziak, who shamelessly uses a number of filters, and of Zbigniew Preisner, who composed the score. Less concerned with hermeneutics than utilizing sound and image to create cinematic poems and draw us into the mindset of two inexplicably but undeniably connected women. Weronika and Véronique meet only briefly, but that only emphasizes the film’s lyrical aims, concerned far more with the inner workings of thought and feeling than with narrative drama and suspense. One could talk at length on a number of gorgeous images, but, to modify an oft-used quote (with no clear attribution), “talking about The Double Life of Véronique is like dancing about architecture.” It’s better to let it wash over you, fall into its spell, and stay there, hypnotized, until the end credits roll. – Forrest C.

Meshes of the Afternoon and At Land (Maya Deren)

A pioneering talent in the world of avant-garde filmmaking, film school staple Maya Daren delivered two notable shorts early on in her career that would go on to influence a multitude of directors. Her first, 1943’s experimental Meshes of the Afternoon (watch in full here), co-directed by husband Alexander Hammid, finds her coming across her own self in a series of dreams, even going so far as contemplating murdering her sleeping doppelgänger — a thought that permeates Enemy. The next year she directed At Land (watch in full here), dealing once again with identity as she finds multiple doppelgängers while on a trip to the beach. – Jordan R.

Few of the frivolous criticisms lobbed against Brian De Palma carry the same weight and longevity as the “ripping-off Hitchcock” business — something I suspect (but aren’t foolish enough to hope) would dissipate quickly if more were to see Obsession. As an extremely obvious homage to Vertigo, his 1976 thriller — with one of the most intriguing screenplays Paul Schrader‘s ever put his name to — is that rare cinematic tip of the hat which manages to expand and shed further light on its predecessor while treading new ground, reconfiguring several key relationships as it tells an original story that winds up at remarkably similar ends. A film about doppelgängers that, itself, is something of a double and, in every which way, only better for it. – Nick N.

Possibly the only one of Bernardo Bertolucci’s films that could be qualified as a comedy, Partner sees him creating an appropriately absurd response to his international breakthrough Before the Revolution by splintering that work’s protagonist into two different people. Of course, this means that each represents a different ideology; one being the passive student, the other the fervent opponent of the Vietnam War whose means of protest extends towards both violence, and naturally, art. Not just loosely based off Dostoevsky’s novel The Double (which serves as the inspiration for another forthcoming doppelgänger film), the presence of Bertolucci’s mentor Jean-Luc Godard is felt heavily in the film’s color scheme and politics. Yet in this case, Bertolucci uses the double conceit to tend to the ambivalences and personal conflicts running throughout his films. – Ethan V.

The subject of endless imitations, parodies, and pastiches, as well as the source of limitless influence, Persona, which Susan Sontag called “Bergman’s masterpiece,” begins as a film about a nurse who accompanies an actress-patient to an island after she gives up speech entirely. But this simple yet bizarre narrative gradually reveals itself to be a meditation on doubling itself—in the characters’ relations to each other, in the blurring between dream and reality, and in the boundaries and dialogue between film and audience. Indeed, Bergman’s mise-en-scene is exact in every detail, from symmetric lighting on the faces of his two stars to the iconic moment at which point the two faces merge, and in the precise moments in which the stars speak directly into the camera, that it’s of no surprise that the master himself claimed that with Persona he “touched wordless secrets that only the cinema can discover.” – Forrest C.

The last film Luis Buñuel made, That Obscure Object of Desire is a farewell only the cinema’s preeminent surrealist could ever dream. Here, Buñuel irreverently and ingeniously turns a technical constraint—his lead actress abandoned the film after an argument—into both a source of comedy and one of his best ever statements about desire. Mathieu (Fernando Rey, dubbed by Michel Piccoli) can never quite figure out how to make Conchita (Carole Bouquet and Angela Molina) fall in love with him, but for the viewer, the reason is obvious—he’s rarely dealing with the same woman in consecutive scenes. On one memorable occasion, Molina walks behind a curtain, only for Bouquet to make the return. It’s a doppelgänger like no other, nonexistent in the narrative but impossible to miss for those of us on the outside, and that perceptive disconnect makes the implausible ending—and the film as a whole—unforgettable. – Forrest C.

Andrei Tarkovsky‘s meditative masterpiece is one of the most affecting films when it comes to overcoming loss. Following Kris Kelvin (Donatas Banionis) as he’s sent to check up on an space station that’s orbiting the fictional Solaris, things start to appear not as they seem. The appearance of Hari (Natalya Bondarchuk), a doppelgänger of his ex-wife who committed suicide years priors, disrupts his plans, as our lead must learn to reconciliate her loss. While much of the last act is open to interpretation regarding the physical and mental state of those involved, it remains a powerful experience, and its remake is also one of the few worthwhile of its kind to emerge from Hollywood. – Jordan R.

Recently crowned as the best film of all-time by one of the most thoroughly founded polls, Alfred Hitchcock‘s Vertigo is a film I’ve always admired, but it wasn’t until director Rian Johnson brought some context that I fully grasped why it works so well. As he writes, “When I finish watching Vertigo I always feel like I’ve been woken from a nap in a muggy room,” and “you realize this isn’t a mousetrap, it’s a fever dream.'” Much of that feeling can be attributed to the unsettling doppelgänger portrayal (certainly not the first time the director has employed the device), as we follow Kim Novak‘s Madeleine Elster and, subsequently, Judy Barton, with not only a dual performance but a doubling of the narrative across its first and second halves. – Jordan R.

What are your favorite doppelgänger films?