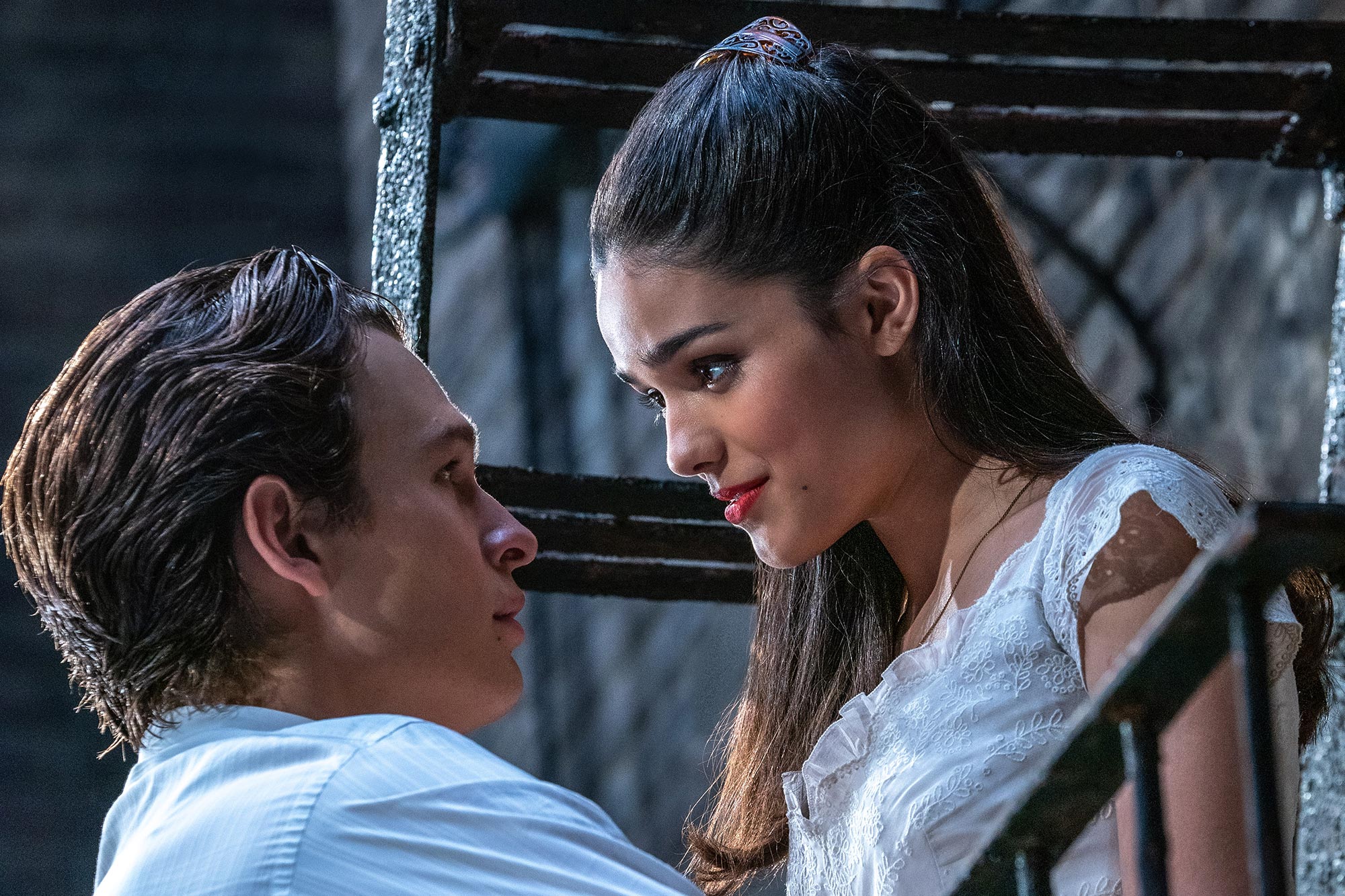 West Side Story—a curious exception in the modern glut of sequels and remakes, with its powerhouse combination of hallowed subject matter and director—announces itself immediately. Where the 1961 original, helmed by Robert Wise and Jerome Robbins, began with a series of aerial shots over New York City, director Steven Spielberg opts for an elaborate crane shot that etches out an important distinction: this story is set amid slums in the process of being cleared for Lincoln Center for the Performing Arts, the immaculate Manhattan arts complex where, it must be said, the film premiered a few days ago. While previous incarnations of the Romeo and Juliet-inspired musical—with music by Leonard Bernstein and lyrics by the dearly departed Stephen Sondheim—were identifiably set in a downtrodden New York, an entirely different sense of precarity begins here, woven into the fabric of the film, as the Jets’ struggle with the Sharks seems doomed almost before it begins.

West Side Story traffics in such deviations, at the level of both form and content, in a manner that alternately heralds the brilliance of both its source material and director. In song-and-narrative structure it functions as a hybrid of the musical (“Cool” is moved back to act 1) and Wise and Robbins’ film—“America” remains a buoyant series of ripostes between Anita (Ariana DeBose) and Bernardo (David Alvarez). But in others, Spielberg and Tony Kushner have greatly built out the contexts of characters, beginning with Tony (Ansel Elgort) himself, who at the start of the film has just been released after a year’s stint in prison for almost killing another boy in a gang fight. Apart from giving him another reason for wanting to leave the gang lifestyle, it also institutes a theme of transformation that courses through a number of characters: María’s (Rachel Zegler) prospective fiancé Chino (Josh Andrés Rivera) is a bookish accountant who wants to join the Sharks against Bernardo’s wishes, while Anybodys’ (nonbinary actor Iris Mena) desire to be in the Jets and assertion of gender identity is further emphasized.

While West Side Story, with its two-day timespan and inevitable tragic end, is an inherently linear work, this version registers as even more focused in its progression and development of characters. Across the board arcs or scenes not present in the original work lend an additional layer of urgency to West Side Story, whether they be as charming as María deciding whether or not to wear lipstick (against Bernardo’s wishes) to the dance, or as charged as Riff—Mike Faist, who practically steals the film with his unique combination of ease, intensity, and vulnerability—purchasing a gun to bring to the rumble; “Cool” is reconfigured as a duel between him and Tony, who attempts to take the gun to prevent the rumble from happening.

In line with the concerted efforts to cast Latinx actors for the Puerto Rican characters, purposefully unsubtitled Spanish plays a significant role: first in a rousing song the Sharks sing in defiance of the Jets and police after the prologue fight, then in a set of conversations between María, Anita, and Bernardo, wherein they speak a mix of English and Spanish. In keeping with a general aspirational spirit through this version that collides with the tragedy, Bernardo is a boxer intending to make his living, and so Anita constantly chastises him, telling him and María to practice speaking English, even as the three feel more comfortable expressing themselves naturally in Spanish. All of this is consciously configured so English speakers will understand everything of importance, but there’s a sensitivity to the way that people talk on both sides, embodied in one of the biggest yet most reverential changes: Doc is replaced with Valentina, the Puerto Rican widow of Doc who runs his store, and is played by Rita Moreno, the original film’s Anita. Very much in the role of a mentor, she represents an alternative path of racial and behavioral harmony, singing “Somewhere” and participating in the final procession that closes the film.

While actors like Moreno, Faist, DeBose, and newcomer Zegler get their moments to shine, it’s likely most accurate to say that West Side Story’s star is Spielberg himself, with a great deal of assistance from stalwart cinematographer Janusz Kamiński, production designer Adam Stockhausen, and costumer Paul Tazewell. With his first full-fledged musical, Spielberg has further incorporated the swooping cameras and piercing lighting that have defined his style as of late, and his choices in setting bring out fascinating motifs. The Jets and their turf are defined by blue, cooler tones, while the Sharks and Puerto Rican neighborhoods opt for warmer, typically orange hues, and the interplay alone in Tony and María’s costumes suggests its own clear progression. While the locales in the 1961 film certainly felt authentic, here they are bustling with life, suggesting something of Jacques Demy in the incorporation of whole communities within musical numbers: “America” becomes even more lively when characters are weaving in and out of stores, crowds, and sidewalks, taking over the streets for short bursts before moving back once again. The dress store of “I Feel Pretty” becomes a multi-level emporium where María literally tries on the fashions and lifestyle of the white upper-class, a literalization very much in keeping with Spielberg’s overall vision.

When the very ground on which people live becomes uncertain, the necessity of passion—in love, in combat—becomes all the more apparent, and Spielberg’s fidelity to that sentiment, and to his own decisions, bears the vitality of this alternate take aloft.