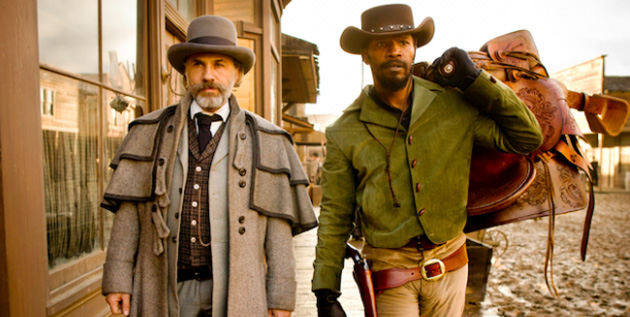 Just a few moments ago at Cannes, The Weinstein Company gave a special presentation of their partial upcoming fall slate, including the first footage of three highly-anticipated movies that are most likely near the center of your radar. After a brief introduction by head honcho Harvey Weinstein, the lights went dark and an extended 4-minute trailer of the teaser that was just released online for Paul Thomas Anderson‘s The Master began.

It opens with the same conversation that is being viewed by millions right now online but with different visuals, most notably an extended single take shot of Joaquin Phoenix walking down an endless hallway. The revelation in this extended trailer is the appearance of Phillip Seymour Hoffman as a Ron Hubbard-esque character (as many have predicted), doing an indoctrination speech and musing about saving Joaquin’s character. Amy Adams also makes a memorable appearance as an acquaintance to Hoffman. The incredible Jonny Greenwood score, played over a series of surreal 1950s imagery, creates an instant atmosphere of paranoid anxiety. It’s safe to say the mood Anderson is going for is something like nostalgic cinema flavored with frenetic, character-driven performances from the all-star cast. The trailer ends with Hoffman passionately discussing the salvation of Joaquin’s character saying something along the lines of, ‘if we can’t save him, then we haven’t done what what we’re supposed to do.’

Second up in the trilogy of previews was David O. Russell’s The Silver Linings Playbook. Starring Bradley Cooper as what seems to be a schizophrenic Eagles fan (he mentions at one point that he’s on lithium), the film seems to be a return to his I Heart Huckabees quirkiness. Co-starring Jennifer Lawrence as an antagonist/love interest for Cooper that promises some more mature acting chops from her, the trailer felt the most like a traditional one, with several scenes of Cooper running in a trash bag and offering up witty one-liners. Robert De Niro and Chris Tucker also look to give great supporting roles in what will most likely be an enjoyable study of insanity, toplined by a promising performance from Cooper. But the standout preview from the event was, hands down, the 7-minute look at Quentin Tarantino‘s labor of love, Django Unchained. The trailer opens with Christoph Waltz as a dentist-turned-bounty hunter, confronting a group of slave owners and then quickly gunning them down with extreme precision. He frees slave Django, played by Jamie Foxx, and takes him under his wing, training him how to use a gun in a Karate Kid–style sequence. The film looks absolutely stunning and exactly what you would expect a spaghetti western would feel like under the direction of Tarantino. His trademark razor-sharp witty dialogue and precise visual gags left the somewhat conservative crowd of critics laughing out loud. Gorgeous vista landscapes contrast a gritty Roots-style aesthetic that will undoubtedly please fans of the firecracker director. Leonardo DiCaprio also looks deliciously villainous as a slave master spouting some evil slangs, with a great southern accent. The final two minutes are edited to the James Brown song Payback, climaxing with Foxx staring dead-eyed at the camera pointing a gun at someone (who was actually the voice of the original Django, Franco Nero, as I was informed by one HitFix’s Drew McWeeny) asking him how to pronouce his name. He answers, “It’s Django and the D is silent” …BAM.

Check out some video impressions below, recorded with First Showing‘s Alex Billington.

The Master bows on October 12th, while Silver Linings arrives on November 21st and Django Unchained hits on Christmas Day.