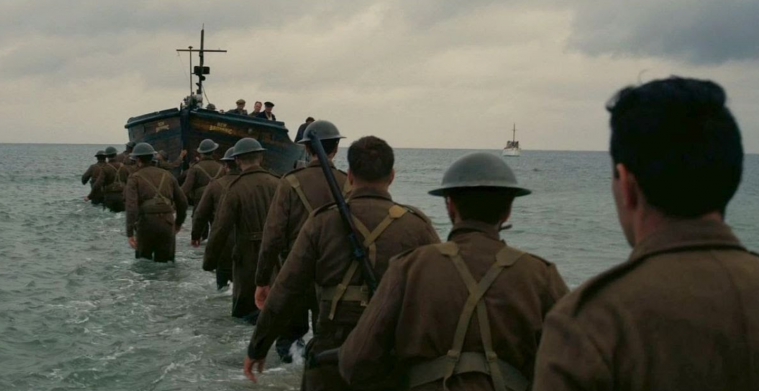 The previous trailer for Christopher Nolan‘s Dunkirk helped to set the stage of the battle, but with a batch of new TV spots, Warner Bros. is upping the intensity. Airing during the Final Four last night, we have one extended spot that includes a great deal of new footage, then four shorter ones that display the dire situation from different points of view on the ground, in the air, and in the sea. Along with the new footage, the director also discussed his war thriller while at Cinema Con.

“Yes, there’s absolutely more IMAX [than we’ve ever done],” Nolan tells Fandango. “The entire film is large-format film photography, and I’ve never done that before. Very few people have ever done that before, and no one has ever shot as much IMAX as we’re doing. Most of the film is IMAX. With every film we’ve learned more and more how to maximize our ability to use those cameras, and we found ways to get those cameras into very unusual places for a camera that size, but the image quality speaks for itself. I think it’s going to be an extremely exciting presentation, particularly in those IMAX theaters.”

He also opened up about the film’s lack of dialogue, saying, “Yeah, you know it’s the kind of film where the visual aspect of the film is dominant right from the get-go. There’s dialogue in the film, but we really tried to approach the storytelling very much from a visual point of view, and an action-and-suspense point of view. Trying to create suspense visually — a visceral sense of what it would be like to be confronted by this awful paradoxical situation.”

Check out all five TV spots in the video below.

Update: The TV spots were removed at the request of Warner Bros.