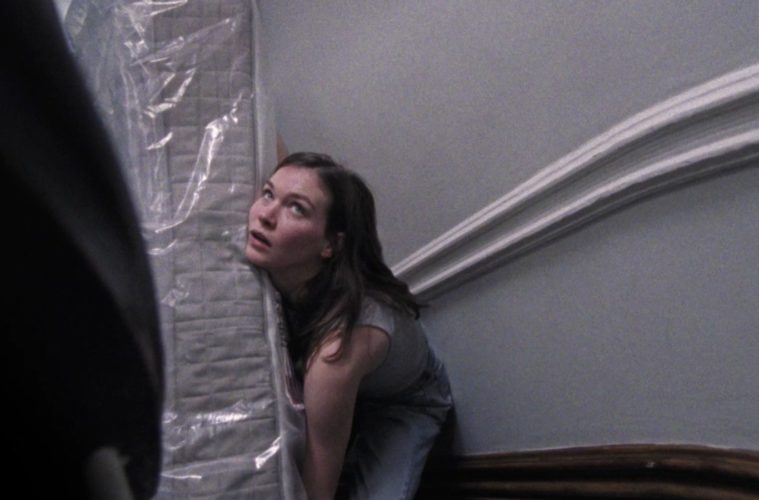 Our friends at Le Cinéma Club further their role as forces for good in this horrible world with “Women to Watch: Five Shorts by New, Exciting Voices”–both entirely what it sounds like and far more involving than your standard showcase of contemporary American films by women. Case in point is their kick-off title, Moving, which recently screened as part of this year’s New York Film Festival program “New York Stories.” Its single-idea premise–a woman (Mindhunter‘s Hannah Gross), moving to a new apartment, attempts carrying a mattress up a flight of stairs–births a perspective any New Yorker will painfully recognize: per writer-director-editor Adinah Dancyger, “a love/hate letter to a beautifully unreasonably place, where we struggle endlessly to create sanctuaries in our small rooms with mediocre views.”

Hardly a second is wasted in Dancyger and Gross’s interplay, and details that what most other times be superflous or incidental — the seasonal nose-rubbing, the puffy coating of a steering wheel–abet a discomfort that starts as dread until, quickly assembled and alien-looking, close-ups of a musculature’s attempt to finally just carry this fucking thing up one single flight become a not-quite body horror. But at least you have a mattress on which to plummet.

Watch the short at Le Cinéma Club, and be sure to return over the next month as their series progresses.