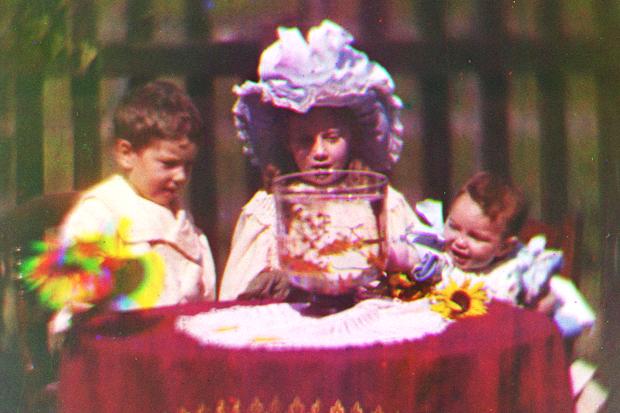 While films like the upcoming Looper present a highly fantasied form of time travel, I’ve always gotten a more palpable sense of that physically unattainable experience through actually watching early cinema. And today we’ve got news of a major breakthrough in film history, as the world’s earliest color film has been uncovered.

Found in an old tin for 110 years, the National Media Museum in Bradford, England discovered the footage, which was shot by  Edward Raymond Turner. The London man unfortunately passed away from a heart attack just a year after shooting this at the age of 29. Captured in 1902 by a process he patented in March of 1899, this predates what was previously thought to be the oldest color footage in 1909. Check out the remarkable process of restoring the footage below in two clips, thanks to BBC (via Movies.com), as well as an extended rundown below.

Lee and Turner’s invention has always been regarded by film historians as a practical failure but it has now been ‘unlocked’ through digital technology, revealing the images produced by the process for the first time in over a hundred years.

Turner developed his complex three-colour process with support, first from Lee and then from the American film entrepreneur, Charles Urban. Using a camera and projector made by Brighton-based engineer Alfred Darling, Turner developed the process sufficiently to take various test films of colourful subjects such as a macaw, a goldfish in a bowl against a brightly striped background and his children playing with sunflowers, before his death in 1903 aged just 29. Urban went on to develop the process further with the pioneer film-maker George Albert Smith which resulted in the commercially successful Kinemacolor system, patented in 1906 and first exhibited to the public in 1909. Sadly, Turner’s widow never received a penny from her husband’s invention.

On discovering the film, Michael Harvey, Curator of Cinematography at the National Media Museum, worked with film archive experts Brian Pritchard and David Cleveland to reconstruct the moving footage in colour following the precise method laid out in Lee and Turner’s 1899 patent. They turned to experts at the BFI National Archive who were able to undertake the delicate work of transforming the film material into digital files, and so the team were able to watch these vivid colour moving pictures for the first time, over one hundred years since they had been made.

What do you make of this discovery?