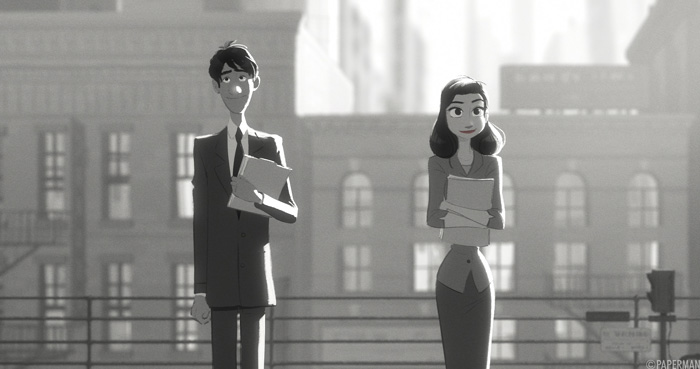 If you weren’t one of the nearly $400 million worth of people that went to go see Wreck-It Ralph, or simply want to relive the experience again, Walt Disney Pictures have made available the fantastic (mostly) black-and-white short Paperman. One of five short films nominated for the Best Animated Short Academy Award (check back tomorrow for our reviews of the entire batch), the project comes from John Kahrs and features the story of a man and woman coming together in an unusual, but charming, way. With a stunning blend of 2D and 3D animation styles, check out the full short video below, running just about 7 minutes in length.

From first-time Director John Kahrs, “Paperman” tells the story of a lonely young man in mid-century New York City, whose destiny takes an unexpected turn after a chance meeting with a beautiful woman on his morning commute. Convinced the girl of his dreams is gone forever, he gets a second chance when he spots her in a skyscraper window across the avenue from his office. With only his heart, imagination and a stack of papers to get her attention, his efforts are no match for what the fates have in store for him.

Do you think Paperman has what it takes to grab the Oscar next month?