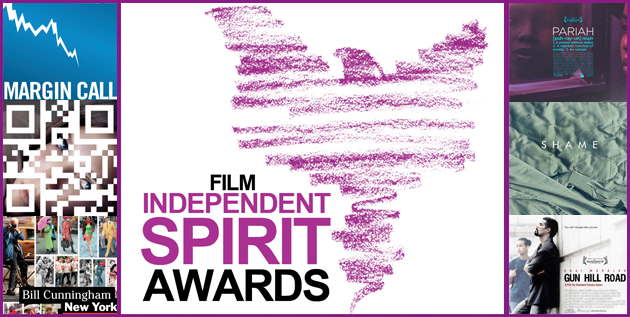 Last week we discussed the Spirit’s frontrunners and this week we’ll explore some seriously stellar debuts and stunning sophomore efforts, many of which take place amidst the various backdrops of my own stomping grounds: New York City.

Let’s begin with Sean Durkin’s directorial debut, an enigmatic portrait of the trauma of an abusive relationship, that earned a spot on my Top 10 of 2011. Newcomer Elizabeth Olsen made a much buzzed about Sundance breakthrough with her harrowing portrayal of a Martha (Marcy May, Marlene…), a young woman who escapes the hold of a charismatic but cruel cult-leader (2011 Spirit-winner John Hawkes) but can’t shake the nightmarish and vivid memories of her time under his sway. I had a chance to speak to Olsen and Hawkes last fall, and was most impressed by the young ingénue’s fearless surrender to a role that is by no means cute and thereby easily marketable. While the film itself has some structural issues, it achieves a thoroughly enveloping atmosphere of anxiety that makes it impossible to forget. [My full review.] [Elizabeth Olsen Interview] [John Hawkes Interview]

Based on her award-winning short film, writer-director Dee Rees’ narrative feature debut centers on a teen girl’s quest to determine who she is. Packed with incredible and grounded performances, Pariah shines, thanks in no small part to breakthrough ingénue Adepero Oduye, who shoulders this tale of personal evolution with a deep charisma and mesmerizing subtlety. Some have compared this gritty indie out of Brooklyn to multi-Spirit award winner Precious, but beyond the fact that each film centers on a black, urban teen, the two have nothing in common. While Precious wallowed in melodrama with deeply disturbing characters and cringe-inducing revelations, Pariah achieves a more grounded and natural style with a plotline and characters that are specific in detail, but universal in theme. Yes, this is the story of a gay, black teen coming out to her parents, but to reduce it to just another coming out tale is to miss out on what makes Pariah so incredible. A major reason that Rees’ coming-of-age drama made my Top 10 of 2011 was that with a slight shift of specifics, this is a story that could be anyone’s, and it is beautiful in concept and execution. [Dee Rees Interview]

Writer-director Rashaad Ernesto Green, who stopped by for a Q&A after the screening of his debut feature, told an awestruck audience that he found the inspiration for his tale in his own life, family, and the community in which he was raised. The tender but gritty family-drama is set in a Latino neighborhood in the Boogie Down Bronx, where Enrique (Esai Morales), an embittered father and husband, returns home from a stint “upstate” (meaning prison) to a wife (Judy Reyes) and son (Harmony Santana) he now struggles to reconnect to. Like Pariah, much of the family tension comes from parents who refuse to accept their child’s queer identity. See Enrique’s son Michael is transgender, but fearful of his parents’ disapproval, he sneaks off and transforms into the young woman he dreams of being, a glittery, girly poetess called Vanessa. The narrative is divided between father and son as Michael journeys through a coming-of-age and coming-out tale, Enrique desperately seeks to recreate the family bliss he remembers from his pre-prison life. Ultimately, Gun Hill Road has the best of intentions but struggles structurally and sometimes tonally. Still, it’s stocked with moments of stunning tenderness and grace due in no small part to Harmony Santana’s incredibly brave performance. Over the course of the film, we see the young performer transform from a shy boy to a self-assured young woman, during which Santana bears her soul and much of her body.

In the post-screening Q&A, Green patiently fielded questions about his mesmerizing lead. Santana herself is biologically male, but identifies  as female and so is a transgender female. He went on to share that during the film’s 22-day shoot, the first-time actress shed her male identity and embraced her female identity, cementing it with her new chosen name: Harmony.  I do believe this is a first in the Best Supporting Female category, and cheer Santana’s inclusion, for as the film suggests, gender is only one element to one’s identity.

Personally, I grew frustrated with so much of the film’s focus being on the bigoted, fiercely macho and sometimes violent father, but afterwards Green made it clear that I was not audience that he most hoped would see his film–though the charismatic filmmaker assured the crowd he was happy to have them all there. Inspired by a cousin’s issues with accepting his child’s transgender identity, Green sought to create a film that would speak to the traditionally macho men he grew up with. I respect that. This reflects the kind of earnest emotional honesty in Gun Hill Road that makes me want to see more from Green as well as his impressive leading lady.

Winner: Robert Altman Award (Determined not by Film Independent/IFP members, but by the Spirit Awards’ American Narrative committee at their discretion.)

Boasting a star-studded ensemble cast that includes Kevin Spacey, Paul Bettany, Zachary Quinto, Jeremy Irons, Penn Badgley, Simon Baker, Stanley Tucci, and Demi Moore, writer-director J.C. Chandor’s debut feature has already won the coveted Robert Altman Award, which is bestowed on the indie film with the best ensemble performance. Last week, I lamented that Thomas McCarthy’s Win Win didn’t score more nominations, and having now seen Margin Call, am a bit at a loss as to why Win Win lost out to this restrained Wall Street drama. Yes, the performances here are strong, but as the plot is stocked with characters that are meant to be ever-stoic and outwardly calm, there’s little to marvel—aside from some serious charisma on Irons’ part. As for the film itself, I found it hard to get into with so many truly detestable characters sharing a shifting focus thanks to the idea protagonist device. But most problematic for me was Chandor’s aggressively ambiguous dialogue, with which characters allude to much but say very little in a stilted diction. In the end, I’m sure there are gripping stories to be told about the 2008 financial crisis –I’ve heard several on NPR—but this isn’t one of them.

Documentarian Richard Press does his best to keep pace with the spry and inspiring octogenarian fashion photographer Bill Cunningham, as he dashes about the streets of Manhattan to snap candid shots of everyday style. Bill Cunningham New York, which earned a spot on our Best Docs of 2011, is a lithe and whimsical portrait of a figure who has huge influence, but little interest in it. Which of course, makes him wildly fascinating!

Shame, Steve McQueen’s follow-up to his Spirit-nominated debut Hunger, re-teams him with frightfully handsome leading man Michael Fassbender. You may remember the first thing that got chins wagging about this New York-set drama was news that Fassbender and his co-star Carey Mulligan go full-frontal. This was just about all I knew of the film’s plot as I sat to screen it at NYFF last fall—whenever possible I try to go to screenings blind as it were—and soon saw why nudity was the main talk of this sex-soaked drama. Fassbender stars as an affluent man with a crippling sexual addiction that may be influenced by a possibly incestuous relationship with his exhibitionist sister (Mulligan). While many have praised the film’s fearless debauchery and gritty melodrama, I found McQueen’s shot choices barred me from being pulled in. See the above image? Several of the film’s key emotional moments are shot this way: behind the key players, who are in profile at best. Setups shot in long takes also tended to lag, and while McQueen has publicly asserted his preference for this shooting style, I felt it lacked polish and created a ponderous pacing. Ultimately, I was underwhelmed. [Steve McQueen/Michael Fassbender Interview]

New York City Set Tales: 5/6 (including 2 in the outer boroughs!)

Protagonists Kicked Out of Home: 3

Protagonists That Literally Run from Their Past: 3

State of Mind: Inspired. While not all the films this week were exactly my cup of tea, I was in awe of so many noble efforts and striking and bold performances. Plus with so many debuts on my docket, I have a fresh batch of new and captivating filmmakers to keep up with.

Check back next Tuesday, when Kristy will discuss: Albert Nobbs, Another Earth, Rampart, Think of Me, Natural Selection, Cedar Rapids, and Beginners.