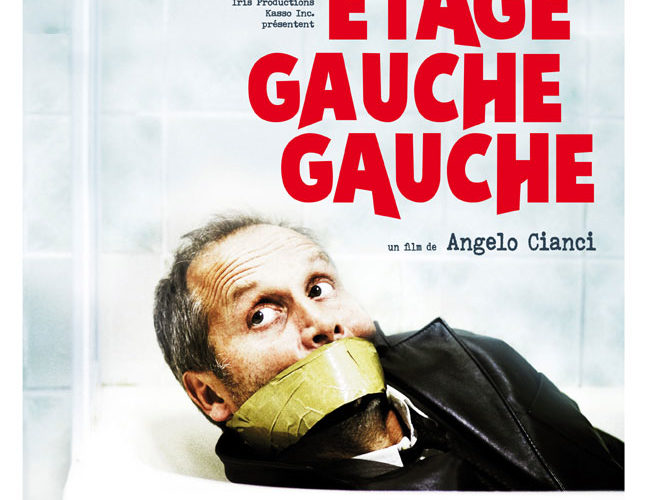 How do you turn a hostage situation concerning cocaine, eviction notices, and Algerian assassins into a stage for bureaucratic ineptitude and slum reform? Ask Angelo Cianci because his film Dernier étage gauche gauche [Top Floor, Left Wing] does it and more. A darkly comic take on generally serious circumstances, a normal day in the life of bailiff François Etcheveria (Hippolyte Girardot) becomes one he’ll never forget. The first apartment of twelve on his list to evict and catalogue property for compensation, no one could have known Mohand’s (Mohamed Fellag) home would be hiding the kinds of secrets it is. One desperate maneuver by son Salem (Aymen Saïdi), though, lands Etcheveria in the bathroom, tied up by tape, and looking down the barrel of a gun.

Both action and comedy start right after an opening credit sequence shows our main players passing each other on the street. Mohand is coming home as the police escort Etcheveria to the top floor, Salem sleeping in bed without a care in the world. But then an overzealous cop knocks on the wrong door while his comrades are stuck in the faulty elevator—a perfect complement to obnoxious motion-censor lights in the hall. The confused conversation containing ‘police’ awakens Salem in a panic, a palpable fear on his face as he attempts to climb out the window before his cell phone falls and shatters on the pavement below. Completely beyond any hope of regaining any semblance of calm, the boy instinctively rushes the door as his father opens it, squeezing out the cops and locking himself, Mohand, and Etcheveria into their accidental hostage ordeal.

All the usual tropes of such a plotline are present. We’ve got dueling negotiators—one white and the other Arab to hopefully be better suited to the assailants—along with the inept government official trying to spin the whole thing politically since his approval rating couldn’t be lower. There are the wives in opposite states of worry—Mohand’s hoping her family isn’t destroyed while Etcheveria’s (Judith Henry’s Anna) can only muster a vindictive ‘I told you so’ after wanting her husband to quit years ago. Some of the police like Lieutenant Saroyan (Julie-Anne Roth) attempt to go above and beyond, but the situation only escalates when red flags are uncovered. With the date being September 11, the timing couldn’t be worse as the entire world watches for the next anniversary terrorist attack.

While the structure may seem familiar, however, Cianci is never afraid to turn things on their head to increase the fun. Relationships play a huge role too, especially between Mohand and his son as Etcheveria looks on helplessly—a stock dynamic you would see in your usual drama with stakes turned high. Salem is mixed up in drugs and hopeful his boss will come guns blazing to save his stash while Mohand wonders where he went wrong as a father. Control changes hands often as the lone gun switches between father and son, the orders yelled only followed if he has it at the time. And as they duke it out, airing their long-dormant differences, their hostage must sit back and soak it in. Calmer than anyone should be in the situation, it’s as though Etcheveria loves every second. Finally there is excitement to contrast his usual depressing days of kicking people onto the streets. Gimmicks abound with the aforementioned lights, an overflowing sink, cranked metal shutters, and a commandeered wedding reception below. Inventive ideas are hatched for removing the cocaine from the equation just as we discover Salem might not be the most dangerous man in the room. As time goes by even Etcheveria becomes a part of the chaos as more than just a helpless pawn. He tries to help them out to save himself and finds being in the thick of things is a journey he doesn’t mind seeing through to the end. His recruitment to the cause—one now much bigger than a troubled kid making a huge mistake—adds to the intrigue and the humor because no one involved truly wants to hurt anyone. The gun is a means for leverage, but one cannot deny the crazy eyes of Mohand and Salem as they grip the trigger.

Luckily, though, those aspects are never made overly dramatic since they’re constantly subverted by fantastic oneliners. Sarcastic quips are tossed left and right as the tension mounts and dark secrets are discovered while ideals flip as the story finds itself culminating into a crazy sequence of mob mentality. What begins as a man against the law spirals out of control into a David and Goliath fight of the poor and helpless against the oppressors of wealth unjustly kicking them to the curb. If I could equate the comical genius of it all to anything it would be Airheads—a stupid film, yes, but one that makes the criminals into rockstars and the hostages into groupies like is done here. That inventiveness saves the generic template used from making Top Floor, Left Wing another facsimile of a clichéd trope we’ve seen too many times.

The witty script is shines as Saïdi speaks his often-vulgar lines to perfection. His back and forth with the more indifferent Girardot creates most of the best laughs as their constant barrage of insults forms an odd bond of kinship. The supporting roles outside the apartment stumble nicely to keep things going when one would assume such an incident could have been solved in minutes, but the satirical take on government stupidity adds its help through slow upgrades in threat levels and authority figures thinking more about how they look than how the situation gets resolved. But above all is Fellag’s central performance with an ever-changing personality as his past is revealed. The trio of he, Saïdi, and Girardot can’t be beat, bringing the dialogue to life. I only wish I found myself more invested in the story, its obvious(?) political undertones a foreign language to me. I did have a great time laughing, though.