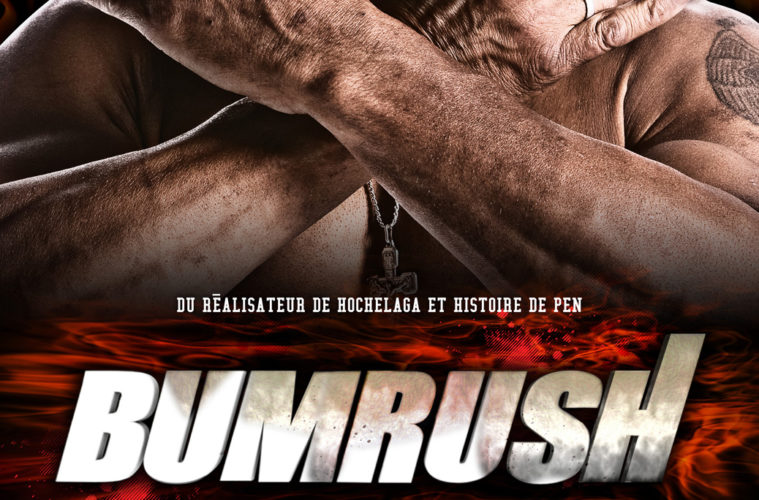 Not to be outdone by its New York City and Chicago counterparts, the Montreal gang wars of the past decade prove Canada isn’t the idyllic place of kindness and cleanliness some would describe it as. In Michel Jetté’s Bumrush, we’re shown how uncontrollable it can all get when the underworld is left without anyone to keep its tenuous balance intact. Learning about the inter-workings of bikers, Haitians, Italians, Jamaicans, and the bouncers caught in the middle from an inquiry made after the infamous Shark Operation of 2009 police takedown, Jetté carefully dramatizes the events into a sprawling story that puts us right in the middle of the action.

Who knew arresting the Italian mob and biker bosses would actually make Montreal worse? With those two peacekeepers in jail, open season is declared in the streets as the Haitians and Jamaicans vie for control. Unhinged and unaccountable, these two gangs begin to pilfer all the real estate they can without an overall plan or system of responsibility. They will blow the heads off leadership positions in response to disrespect, tempers flaring to make the possibility of finding a cohesive leader tough, if not impossible. What the Italians and the bikers had above all else was a sense of self and loyalty, following their bosses until death whether happy or not. The black street gangs, on-the-other-hand, are fickle, cliquish, and quick at the trigger. They’re volatility and unpredictability proving to be nearly unstoppable.

The interesting dynamic Jetté brings into his story, however, isn’t the mobs rebuilding to take down the gangs like in American movies. Whereas we go full-bore into the streets for retribution and glamorized chaos as factions cannibalize, here it’s the bouncers who are the last line of defense. Lacking the protection of Italian strong-arming and biker solidarity finds these doormen ill prepared and unable to keep their lives, property, or customers safe. And when you’re a guy like Papy (Pat Lemaire)—owner of the Switzerland of Montreal gentlemen’s clubs—you’ll find their desire to call your place their own is a commodity not easily swayed from achieving. So as the I.B. 11 gang head (Robert Pace) promotes his most unpredictable soldier Loose Cannon (Paul Dumas Frappier, aka Bad News Brown) to the position of taking it over, Papy decides he must enlist the help of his old Bosnian war buddies for a counter attack.

And this is where Bumrush unfortunately falls a part for me. Jetté is man who casts faces and does so very well. But no mater how aesthetically perfect the face, if the acting talent isn’t there, it’s hard to envelope an audience into the actions onscreen. So many of the people involved in the film are actual mainstays in the clubbing and hip hop world of Montreal—Papy actually owns Kingdom, the bar used as the central location of the street war; ex-con and turncoat for the I.B. 11s, Catherine (Dara Lowe), is an actual bouncer herself; and Bad News Brown was a rising star in the music world and the most natural actor here who sadly was killed shortly after production. We’re given some major fierceness from guys like Pace and Lemaire, but lingering camerawork soon turns attempts at fury into unintentional comedy and uncomfortability. Then you add in the et of the doormen crew with Tank (Sylvain Beauchamps), Shrink (Constant Gagné), Momo (Alain Nadro), Papy’s little sister Lou (Jézabel Drolet), and the general at the top, Kid (Emmanuel Auger), and you find yourself wondering if the WWE is a producing partner. It’s a petty critique, I know, but when the script is a tautly suspenseful actioner like Jetté has created, you can’t help but wonder how much better it could be with professional actors in the parts. Sometimes putting people who actually live the lives of those in the story isn’t as smart a move as one would think. To have them on as consultants is one thing, but putting a camera on them is a completely different monster all together. Artifice seeps in as ‘acting’ takes over; the only natural moments become fast-talking, profanity-laced quarrels and the effective fight scenes throughout.

These battles between the bouncers and I.B. 11 gang are where the actors appear to be having fun and letting inhibitions melt away. By making the Kid and his boys ex-Blue Berets, we buy into their strategizing and skills to hold their own and let enemies of their enemies be friends. They all have fun, goofing around as they recruit each other from their Army-less day jobs with effective laughs that are more prevalent than you might expect. My favorite scene like this is watching the intrinsic good-nature of Nadro’s Momo and the stoic malice of Gagné’s Shrink opposite the loudmouthed confidence of gangbangers smoking up in their bar—a well-placed Star Trek joke hits big. And Bumrush has so many great moments like this that it only makes it more disappointing to discover how far away I was, never all in to let the epic scope wash over me completely.

It’s a shame because I really enjoyed the script and its schemes to hold down Kingdom in an engaging yarn of underworld beefs. By focusing on that one sanctuary of independence, Jetté lets the rest evolve naturally as it affects outsiders’ attempts to muscle in. These boys will never be intimidated and Auger’s Kid (think a more accessible John Cena-type) is the badass that will make these gangs aware. And while some aspects go far over-the-top—see Giuseppe Giancaspro’s Brain Martiano for racial stereotype to the nth degree—Auger keeps things rooted in a calm, collected reality of standing tall and protecting what matters most. Between he and Bad News Brown’s Loose Cannon, you catch glimpses of effectiveness along with the softer moments of Drolet and the fearlessness by the director to kill off key roles throughout. Jetté certainly is one to watch and I believe that if he ever gets the talent, he may make a big splash yet.

Bumrush is currently playing at the Vancouver International Film Festival.