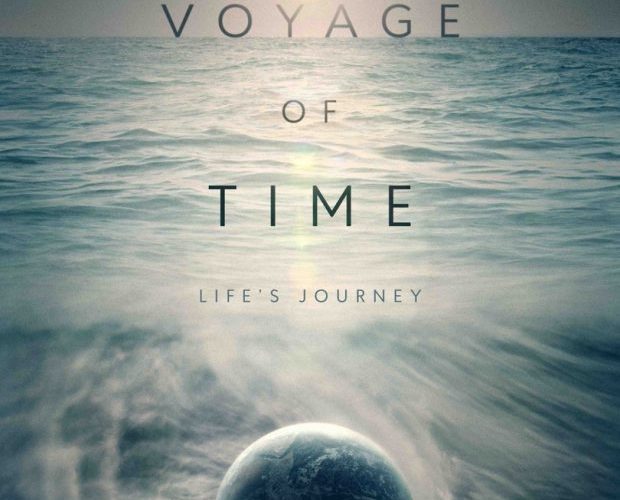 You could argue that Terrence Malick has been trying to find or express catharsis in his films as far back as 1978’s Days of Heaven. That trope has become more and more synonymous with the director as decades have passed, and Voyage of Time: Life’s Journey — a high-caliber visual essay that some people say has been developing for almost 40 years, although it’s probably more accurate to say it’s been in production for “only” seven — always looked like the most direct expression of that search for divinity. It could deliver that experience for some in the audience, and, as narrated in feature length by Cate Blanchett (a 45-minute version narrated by producer Brad Pitt will arrive on IMAX screens), it might be better defined as a voyage of life. Through sometimes-dated (but often glorious) CGI and live-action footage, Malick’s long-gestating epic charts the birth of the cosmos through to the evolution of earth and, finally, to our supposed inheritance of the planet.

Blanchett’s narration guides us through Malick’s imagery via an imagined call to a “mother” (a significant gender shift from the male, “father”-centric narration of Malick’s recent films) who is — perhaps — the sun, mother earth, or the Gaia. We begin with an image of the sky: “You walked with me there in the silence”. We see handheld footage of homeless people and poverty in developing countries, a possible expression of the director’s disillusionment, before cutting to cell structures, nebula, and galaxy formations akin to those produced by the Hubble telescope. Then we see what appears to be real-life imagery of lava flows and forming bedrock — possibly the genesis of our planet. Complex life forms then appear. Cue Cate: “Mother. Born. Now I am life.”

No matter the time it took for this thing to come together, Voyage of Time somehow retains the quality of a stream of consciousness. Malick returns to street scenes from countries in the Mesopotamian area, India, and China, and, from there, it’s the development of life — the ocean to the first vertebrates to what appears to be recycled dinosaur imagery from The Tree of Life. That age’s demise is shown through a catastrophic event, one Malick (somewhat dubiously) juxtaposes with scenes of unrest in Iraq. Pessimism, it would seem, is on the director’s mind.

The first Homo sapiens appear at this point to give proceedings a sense of tension that, up until now, had been lacking. (We are not without our flaws, but you could never say our species has been want for drama.) Malick’s editing becomes more fractured here, almost avant-garde. Life is a “giver of good,” Blanchett reminds us. The director moves from the first wielding of fire to scenes of a lightning storm, then to social animals (e.g. dolphins and schools of fish) and the way they interact, then to Old Testament-style murder. We can see what he’s getting at.

This is not exactly landmark stuff. Many viewers may feel they’ve seen familiar things in the work of David Attenborough, or even in films such as Koyaanisqatsi or Samsara. However, Malick might be singular in his earnest search for the sublime. Voyage of Time resembles much of the director’s recent work in how it may be a Rorschach test for anyone choosing to see it. The audience is simply asked to take whatever resonates with them and, maybe, not worry so much about the sections they have discarded. A cut from a corn stalk to the absurd Burj Khalifa in Dubai, no doubt a Kubrick homage, reminds us that cinema itself can be sublime. If that is indeed the case, perhaps Malick’s completed the staggering task he set out to accomplish.

Voyage of Time: Life’s Journey premiered at the 2016 Venice Film Festival and will be released in the United States in 2017.