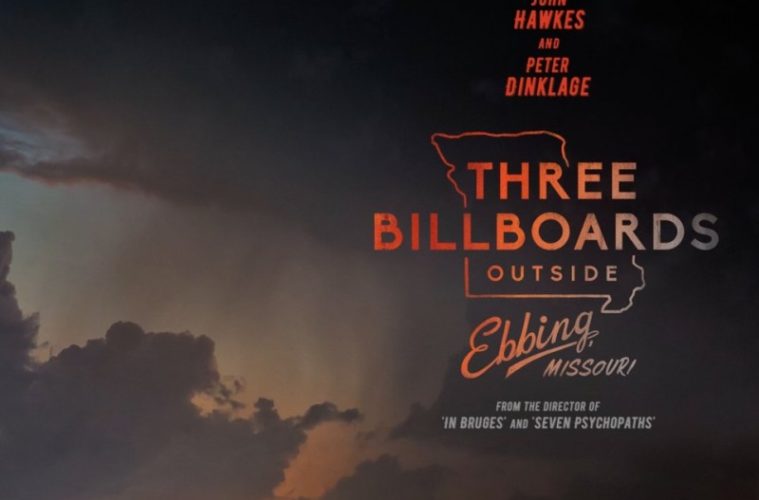 As cumbersome titles go, Three Billboards Outside Ebbing, Missouri is right up there with the Pirates of the Caribbean: Curse of The Whatevers of this world. Coming from Martin McDonagh–a London bred writer-director of Irish extraction–there are perhaps even notes of pretension in its derivative Americana. Of course, whoever said that books are not to be read by their covers should have perhaps said something about titles, too. Indeed, McDonagh’s latest work is simply exceptional; a film so rich with narrative fluidity, profane laughs, standout performances and complex character studies that its tremendous emotional hits–often arriving when you least expect them–might just leave you agog.

Just consider the moment when Mildred Hayes (Frances McDormand) and Sheriff Bill Willoughby (Woody Harrelson) have their first real showdown, in a backroom of the local Ebbing police department. Mildred has been brought in by Willoughby on a misdemeanor but he really wants her there to answer questions regarding the three blood-red advertisements she has paid the local ad-guy (Caleb Landry Jones) to plaster onto the billboards from which this film gets its title. Each is brandished with a succinct messages, written in black, and aimed at smearing a police force who Mildred feels have not made the effort to find–and bring to justice–the people who raped, murdered, and burned her daughter. She will soon learn that while her virtuous attack on the town’s status quo is sure to put a certain degree of outside pressure on a police force many in Ebbing remain sympathetic towards (for reasons that become apparent); it will also alienate her and those she cares for the most.

As if she could give a damn.

Sitting in the station, Mildred reminds the sheriff of past claims that his deputies–namely one Jason Dixon (Sam Rockwell)–assaulted a black man while in custody. Willoughby retorts by bringing up Mildred’s physically abusive husband (who we meet later, played by John Hawkes) and the fact that he left her for a 19-year-old (Samara Weaving). McDormand’s famously protruding lower lip has always been there to remind us that she knew something we did not so, needless to say, as she sits in Willoughby’s chair, exchanging mortar fire with the man, her face the image of stoic unflinching self-assurance, we route for her wholeheartedly.

The crux of what sets McDonagh’s film apart is the fact that Mildred’s vigilantism and strangely right wing outbursts make her almost too extreme to evoke our warmest affections. With her assured gait, unflinching stare, and blue overalls she seems more like Paddy Considine’s angel of death in Dead Man’s Shoes than any sort of heartwarming soldier of justice. Flashbacks do little to suggest she’s ever been much different. The most classically sympathetic character might instead be Willoughby, who is arguably a fool–and far too easy on his deputies–but also a family man, and one with pancreatic cancer and Woody Harrelson’s sad eyes. So when, all of a sudden, Willoughby accidentally coughs blood onto Mildred’s face we are rattled to see her react not with anger but with neighborly, perhaps even maternal, care. McDormand’s whole being seems to soften irrevocably in a split second. On the surface it’s little more than a change of facial expression and vocal timbre but it’s difficult to think of a more shocking moment in recent cinema. And how about the moment when Sam Rockwell’s bigoted, uneducated deputy Dixon attempts to process the death of a friend? He stands in front of a mirror, like Channing Tatum did so wonderfully near the close of Foxcatcher. It almost begs him to be smashed to pieces. We await the explosion, but it never comes.

Dixon’s control at that second betrays a certain depth we hadn’t before seen in the character and it’s difficult to think of anyone else but Rockwell pulling it off, all clenched fists, searching eyes, angered somehow by his own vulnerability. Cinema has missed the great actor’s intensity for too long and it comes as a true pleasure to find a director willing to allow him the space to explore the darker extremities of those talents once more.

The less said about the plot the better, perhaps, but we can go so far as to suggest that McDormand’s pin-hair emotional turn won’t be the only time McDonagh pulls the rug from underneath the viewer. Indeed, such are the complexities of his script and the staggering performances of this ensemble cast that we can never be too sure of our footing throughout.

The lion’s share of credit, however, must undoubtedly go to McDormand and Rockwell, who have seldom if ever been quite so arresting. They easily dominate the screen during Three Billboards many scenes of conflict but it’s in the film’s quieter moments that we really marvel at their skill. McDonagh is certainly a director who loves actors (and they must love him, too). This is the greatest testament to that in his career in cinema so far.