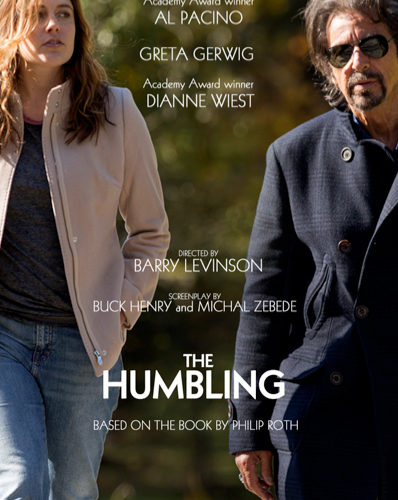 Shot over 20 days, largely in director Barry Levinson‘s own Connecticut house, The Humbling is an adaptation of Philip Roth‘s novel looking at the enigmatic figure of Simon Axler (Al Pacino), a screen and stage legend who seems to have lost his gift for acting. After an eccentric stage exit during his last production in New York, Simon enters into therapy and retreats to the solitary confinement of his barely furnished country house. Little time passes before the daughter of two old friends shows up at his door and confesses to have harbored inappropriate thoughts about him since “when they were really inappropriate.” A puzzling young woman, Greta Gerwig‘s Pegeen has a complicated romantic past and some issues of her own. Just like that, a relationship is born.

The Humbling is a film of shadows – partly because it’s constantly hiding beneath Levinson’s grainy gold-tinted hues and solid blacks, but mostly on account of the “meta” element wherein Pacino’s persona mixes with his character. There are remarkable similarities to Iñárritu‘s Birdman, which screened just a couple of days earlier at the Venice Film Festival. Much like Micheal Keaton in the fest’s opener, actor and role are in constant dialogue here, and the narrative touches on the same beats (notably in the beginning and ending). Yet, amusingly enough, the two films could not be more different in terms of everything else, with style, pacing, and scope all at opposite ends of the spectrum. Levinson has enough experience and history with Pacino to let him do his thing and assemble the film around him, the director sometimes indulging the actor beyond repair. The result is a melancholic alternation of bitter and comedic sketches, all resolutely low-key and wildly uneven. A prolonged mid-sequence involving a cat, a veterinary, and the misuse of animal anesthetics is especially baffling, and I don’t know what I found harder: to stop laughing or pinpoint why I was laughing.

Fans of the novel will know it’s a much bleaker affair, but Levinson and Pacino seem content to only explore the fringes of the story, despite having the additional fodder of Pacino’s personal history to exploit for a late-career commentary / comeback. This, along with Manglehorn, feature a Pacino that people will understandably want to see. It’s a juicy performance, and it shows a vulnerable, mellow side that peels away some of the legend’s layers. The Humbling and Manglehorn are the first films in which Pacino truly digs into issues of old age and displays his body in a new light. These reflections are enough to make either work significant, yet not quite enough to fully serve and integrate into either film.

It’s amazing how Greta Gerwig’s performance manages to survive such a loaded co-star role as well as her own patchwork of a character. Echoing at first her finely tuned turn in Noah Baumbach’s Greenberg, Pegeen rapidly evolves into an unpredictable, magnetic woman – and it’s unclear how much of this belongs to the character or is filtered through Simon’s experience.

The Humbling premiered at Venice and will be released in the U.S. by Millennium Entertainment.