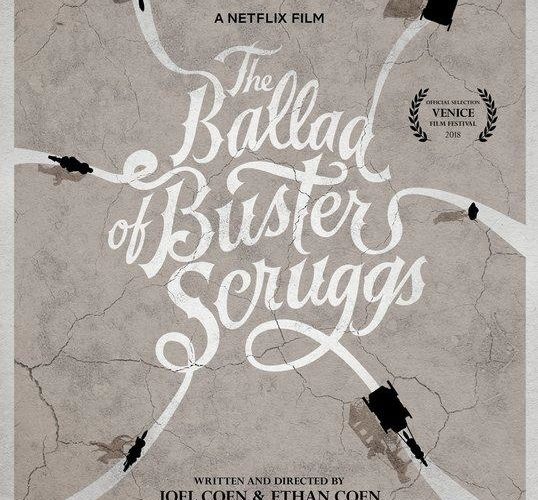 Eyebrows were raised when the venerable contributors of Sight & Sound named Twin Peaks: The Return the second-best “film” of 2017 despite the fact that only a niche selection of theaters had offered to screen it in its near 18-hour entirety. We can rest assured there will be significantly less fussing about what exactly to call The Ballad of Buster Scruggs, a project that began life as a six-part anthology series at Netflix and is now being presented as that rarest of beasts: a feature-length portmanteau.

Scruggs is, of course, the latest work from brothers Joel and Ethan Coen, and represents a ravishing if wildly uneven addition to their catalogue. It also marks their first foray into the odd waters of the portmanteau subgenre, which is perhaps a little surprising when considering the duo’s dexterity with so many cinematic modes, not to mention their signature ability to switch between such a wide range of serious and farcical tones.

I like to imagine the Coens’ spectrum of seriousness as a sort of bell curve, with Miller’s Crossing plonked far left, maybe Burn After Reading on the opposite end, and the films that best combine the directors’ two tendencies (e.g. A Serious Man) on the apex. (But that’s just me.) Buster Scruggs‘ six chapters would take up a variety of positions on that imaginary, totally inaccurate graph. Indeed, there is a bit of everything in here: musical; comedy; explicit slapstick violence; heartbreak; morality tales; and even macabre horror. The thread that somewhat lackadaisically links the six tales is their setting: the old Western frontier, a locale and time that the brothers have worked wonders with in the past (True Grit) and one where their idiosyncratic dialogue finds a natural home.

Indeed, if you’re coming up with nicknames like “The Misanthrope” and “The Wingless Thrush,” you’re probably having a good time. The former, as it turns out, is the supposed alias of Scruggs himself (a marvelous Tim Blake Nelson), a traveling troubadour, quick-handed gunslinger, and mild psychopath who takes offense at the nickname and any other suggestion of cynicism on his part. Scruggs’ chapter is where the film begins and is one of a number of times during the Coens’ latest that I wanted to see a bit more. (Therein lies the hazards of the anthology format, perhaps.) Another time was for the latter, titled “The Meal Ticket,” in which we follow a bottom-feeding P.T. Barnum-type impresario (Liam Neeson), who hops from one small settler town to the next with his act, “The Wingless Thrush,” which starts miraculously but somehow fizzles out.

“The Wingless Thrush” is a young Englishman (Harry Melling) with no limbs who recites Shakespearean sonnets, Percy Shelley, and the Gettysburg Address on a gorgeous emerald green stage at the back of a wagon. As you might expect from the brothers, that sort of lush production detail is not in short supply here. With cinematographer Bruno Delbonnel, reteaming after Inside Llewyn Davis, the Coens shot in New Mexico and the Nebraska Panhandle, and have managed to capture those eye-popping vistas with much of the same dignified glory with which they were seen in the great Westerns of old. The costumes and interiors are no less exceptional, nor is the remarkable casting. The great composer Carter Burwell gets to play with a remarkable variety of moods in a relatively short space of time.

The other four chapters, thankfully, feel a great deal more completed than those previously mentioned. There is a great little potboiler in which Tom Waits plays a cheerful prospector who gets a sniff of gold in a vibrant valley, and I especially relished Brendan Gleeson’s song at the very end — and, most of all, Zoe Kazan’s gentle performance on the wagon trail romance “The Girl Who Got Rattled” and that section’s bloody denouement. The bizarrely overlooked actor has been enjoying a resplendent comeback these last two years. Long may it last.

A great deal of Buster Scruggs might ultimately be a touch undercooked by the mercurial siblings’ standards, but dagnabbit if there isn’s a whole lot to like.

The Ballad of Buster Scruggs premiered at Venice 2018 and opens in theaters on November 8 and on Netflix on November 16.