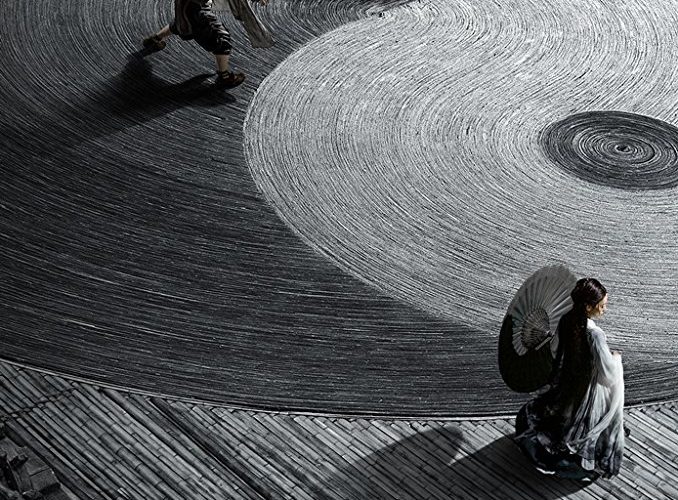 With its gorgeously choreographed sword duels, sabers slicing through paddles of blood and rain, watercolor bi-chromatic palettes and sumptuous costumes, Zhang Yimou’s Shadow (Ying) is a film of visual charms. To enter into the Fifth Generation maestro’s latest period piece is to be invited to marvel at a 116-minute long dance – a stunning return to form from a director who’d previously ventured into semi-autobiographical terrain with the 2014 moving Coming Home, and later veered into the bombastic Chinese-cum-Matt Damon blockbuster epic letdown The Great Wall (2016). Shadow brings heart and spectacle together, and the result is a bombastic martial arts wuxia replete with duels of breath-taking beauty that will please longtime Zhang acolytes and newbies alike.

A reimagining of the Three Kingdoms saga based on a previous script by Zhu Sujin and credited to Zhang and Li Wei, Shadow is an intricate tale of palace feuds and doppelgängers. Cunning army commander Yu (Deng Chao) of the Pei Kingdom has been wounded in a near-fatal duel with the mighty spearsman Yang (Hu Jun), leader of the army that captured Pei’s strategic city of Jingzhou. Weak and crippled, Yu went hiding in the palace’s secret chambers, and has recruited lowborn and lookalike Jing (also played by Deng) – whom he had taken out of poverty and trained to act as his double since childhood – to fill his shoes at court, and persuade the King (Zheng Kai) – unaware of the swap Yu/Jing – to wage a war to conquer back Jingzhou. But the monarch won’t listen. The prospect of keeping the throne without upsetting a “sacred alliance” with the invaders is far more important – to the point that the cowardly Sire is willing to offer his own sister (Guan Xiaotong) as concubine to please the enemy. With the assistance of his wife Madam (Sun Li), who has helped Jing to take her husband’s place without anyone noticing, Yu and his decoy plot the revenge from the shadows.

Black ink daggers into the screen as the opening credits roll, long white silks sprawl on dark floors, a tai chi diagram serves as training ground for Yu, Jing, and Madam, the black and white yin-and-yang echoed in the pale garments and dark surroundings: anyone familiar with the warm and soft palettes of Zhang’s prior undertakings will find in Shadow a spellbinding departure. Styled with black and white locations (courtesy of production designer Horace Ma) and costumes (Chen Minzheng), but shot in color by Zhang’s regular DP Zhao Xiaoding, Shadow’s desaturated palette is a homage to China’s traditional ink brush paintings, which reinforces the stark contrast with the several bloodbaths, but also underscores the dualism that anchors the film.

It’s no wonder Yu would train Jing over a yin-yang diagram, and that the only way one can beat indomitable General Yang – where tai chi battles look a lot closer to chess games than sword fights – is to merge brutal force with delicate, sensual movements. Nor is it surprising that the ultimate strategy to bring down Yu’s nemesis does not come from the general himself or his Shadow, but – in line with the pivotal role played by women in Zhang’s oeuvre – Madam herself. It is Madam who, much to Yu’s wounded pride (“I designed this diagram… why haven’t I thought of this?”), wields an umbrella with graceful moves (“feminine,” as Yu later bills them), and successfully neutralizes her husband’s sword game, teaching Jing the key to victory against Yang. Visually and thematically, Shadow is a web of dualities – black and white, woman and man possibly the most explicit – where success in battle is contingent on the harmony between the two opposing sides. “When you have a tough power, you must counteract it with soft power,” Zhang said in interview, and the remark is echoed in the stunning, pivotal juncture where Madam invites Jing to hold her arms as she guides him in a dance against her husband, a training duel where all the sheer fury of Yu’s bamboo stick is discharged on the shiny and slippery oil-paper umbrella.

“Wield your umbrellas with feminine moves,” Jing instructs the band of misfits whom he later recruits to take over the city of Jingzhou, and the thugs catwalk with their umbrellas – the fabric replaced with razor-sharp semicircular blades – spinning and shooting them like boomerangs at the enemy. There’s something endlessly funny in watching an army of mobsters strutting provocatively before a dumbfounded rival, but the chuckles soon give way to awestruck wonder, as Zhang films what is possibly the summation of Shadow’s visual grandeur, Jing’s thugs whooshing down rainswept Jingzhou, the iron umbrellas turned into coracles.

“No one cares if a decoy lives or dies,” Jing tells Madam, one in a few exchanges where the unshakable soldier allows himself to show glimpses of fragility. Shadow may be a little talkier than your average wuxia – and Zhang certainly does take his time to sketch the political and sentimental rivalries Jing must navigate inside the palace – but the dialogues are always adversarial, even when cast in a seemingly empathetic light, and never subtract from the tension of the many on-screen duels, even when they intercut them. It is always refreshing to see a revered director get back on their knees after a career blip. If The Great Wall was a disappointing head-scratcher, Shadow ushers in a fresher Zhang, in a beautifully mounted period piece that ranks among his most captivating offerings.

Shadow premiered at Venice International Film Festival and opens on May 3.