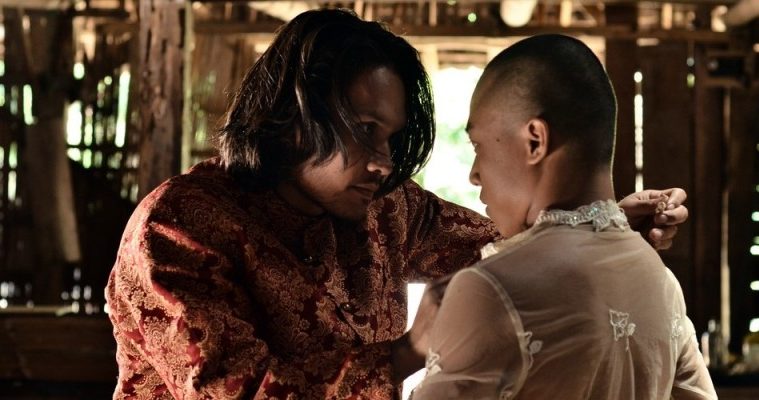 Gender complicates everything. It dictates how our we live our lives. The image that we project is usually aligned with the image we were saddled with at birth, but sometimes these two things become dissonant, making the person abstract in the eyes of a vicious public, and making life that much more difficult. In Memories of My Body, that is the case, as a young Indonesian boy Juno suddenly finds himself at odds with all things masculine, and gravitates towards activities that could be considered more feminine.

Director Garin Nugroho goes about this by structuring his narrative in shorter vignettes, which stand in for the memories mentioned in the title. Before each of these passages begin there is a short monologue from Juno at his current age giving what is essentially a spoken word poem about his body. These are usually vague, only subtly hinting at what will come, but is a nice primer distinguishing each period from one another so they do not feel overextended by the otherwise typical chronological order.

Early on, there are already signifiers that Juno is going to have a hard life as a young boy. Nugroho foregrounds shots of other boys engaging in play with one another, but Juno is more often than not singular. He sells fried crickets to get money to go look at Ziggy Stardust-era David Bowie posters, a figure he is instantly drawn towards, and he spies on women putting on makeup before a big show. He looks on with something that could only be described as envy. In these opening moments Nugroho does a formidable job of singling out Juno as someone who isn’t a normal child. He enjoys solitary spaces because it offers him something resembling freedom to move his body however he pleases and engage in whatever activities he wants. Ironically, he’s drawn towards the stage, but one feels that has more to do with theatricality, make-up, and movement rather than a desire to express themselves in front of a larger audience, considering Juno appears to never be more at home than when he’s alone popping his hips back and forth like the women he likes to spy on.

The film follows this pattern throughout, where Juno grows up, finding his life more and more difficult to manage due to the surging femininity in his otherwise masculine shell. His body contains multitudes–most of our bodies do–but those more visible always face harsher punishment. In this film and in real day-to-day life just about anywhere it’s unacceptable for a man to be like a woman. From a societal stand point there isn’t much worse, and that’s doubled down upon in this film where Juno’s proclivities worry and frighten various townsfolk. We see Juno, in his own quiet spaces, expressing himself, and in those moments he’s anything but weird. For his body, it is only natural to embrace femininity. This isn’t gender dysphoria, but the natural chain of things.

Memories of My Body has trouble sustaining its interesting thesis on gender the older Juno gets, and particularly struggles in the final segment, loosely titled “My body is a battlefield.” By this point, we know that Juno’s intimate difficulties with reconciling his own femininity in a public sphere has damaged, flattened, and dimmed his own personality, so following this same path once more feels more redundant rather than revelatory. Nugroho also has difficulty keeping the filmmaking compelling in these parts as a tactile appeal gets lost, introduced earlier in scenes when Juno touches the breast of his dance teacher or washes the man he has a crush on after a kickboxing session. It is during this final segment that the film leans too heavily into its violent tendencies while offering nothing new to say that hadn’t already been established earlier before.

In the stronger aspects of Memories of My Body there is a through-line of interrogation on what makes gender reveal itself, and Nugroho smartly doesn’t answer this question deliberately, instead opting for an argument that there is something innate about human movement. Movement being the key word because for Juno the raging femininity screaming to be heard in his body isn’t due to his interests in make-up or his attraction to men, but in his desire to move with grace rather than be caked in the cement of toxic masculinity’s stiffness. Juno, more than anything else, wants to move, and, in his eyes, women are afforded this opportunity more frequently than men. At its absolute best, Memories of my Body completely understands this idea and illuminates it through pin-point imagery and the contradictory images of the acceptability of men (the violence of kickboxing) and women’s movement through dance. More often than not, Memories of my Body is the rare film that has a fundamental, smart, understanding of gender, and how it reflects every aspect of our lives, even when we aren’t paying attention to such things.

Memories of My Body premiered at Venice International Film Festival and is streaming on Festival Scope through September 19.