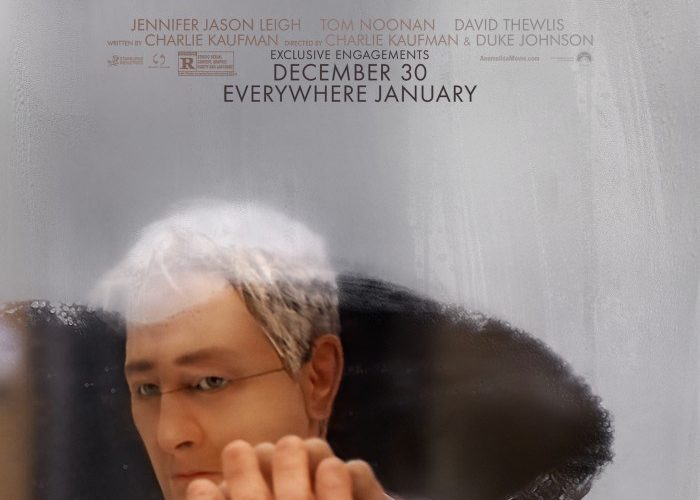 What exactly has been brewing in Charlie Kaufman’s head for the last 7 years? This heart-wrenchingly worrying film, it seems. After a slew of near misses, the singular screenwriter-turned-director is back with Anomalisa, his first film since the well-received but financially calamitous Synecdoche, New York in 2008. Based on a “sound play” developed by directors Kaufman and Duke Johnson, with input from longtime Coen bros. composer Carter Burwell, it is a coarsely unsettling, tragically profound, and often quite funny stop-frame animated picture that focuses on two lost souls who meet in a faceless hotel and share a one-night stand.

Originally produced as a theater piece with the same players involved, its story follows a melancholic customer service guru, Michael Stone, on a trip to Cincinnati, where he is scheduled to speak live. Stone (voiced by David Thewlis) cuts a sad sort of puppet. He walks like a somnambulist, has a belly protruding worryingly over khaki pants, is adrift in the twilight of middle age, chain-smokes cigarettes, necks Belvedere Martinis, and sings Lakmé in the shower.

Michael spends a night in the Hotel Fregoli – pronounced Frais Góli, according to the concierge. Desperate for sex — or maybe any human connection — he contacts an old flame of his who he hasn’t seen in over a decade. She’s initially flattered to hear his voice, but the meet-up is a disaster. His selfishness, a consistent theme, is already looking dubious.

Kaufman had originally wanted to name the hotel after the Millennium in Cincinnati — upon which it was based — but couldn’t, for legal reasons, and chose to name it after fregoli syndrome instead. This is a delusion that causes the person affected to believe that multiple people are the same. Indeed, everyone Michael sees throughout the film looks and sounds (courtesy of Tom Noonan’s voice) exactly the same. Until the titular anomaly, that is.

Rejected by his old squeeze, Michael soon comes across two fan girls from the midwest, Emily and Lisa, who have come to town just to see his show. They work for a company called Tessman Foods where, allegedly, Michael’s methods have improved productivity by 90%. Voiced by Jennifer Jason Leigh, Lisa is the only puppet we see, aside from Michael, who doesn’t look and sound like the rest. So following a few drinks in the resident’s bar, the repressively self-conscious Lisa sings “Girls Just Wanna Have Fun” in English and Italian, causing a drunken Michael to briefly fall in love.

The Hotel setting carries some interesting connotations, not unlike those in Barton Fink’s creative purgatory or the comatose dream sequence in season six of The Sopranos. It can be an afterlife, or way station, or sub-life place. Stone isn’t quite dead here, but Kaufman may be suggesting that there’s little difference. What’s more, we get a tremendous dream sequence in a queasy basement room of the hotel. Kaufman lights it through a fish tank so that the walls look like light on water, like Lynch’s Club Silencio in Mulholland Dr. A hotel worker makes a pass at him and he struggles to get away, resulting in a sexually ambiguous panic attack with hints of homophobia and potentially the afterlife.

And there’s remarkable tension to the more sober imagery as well. The seemingly boundless possibilities of this form should be an ideal tool for portraying the director’s signature flourishes, so Kaufman’s economy and restraint with said flourishes is remarkable. He treats the puppets with the sort of respect John Cusack treated his with in Being John Malkovich. A bold betrayal of audience expectations that only adds to the film’s singular mood.

Team America brilliantly mocked the limitations of a puppet’s movements, but only once does Kaufman exploit it for laughs. The daring centerpiece of Anomalisa is a cumbersome but strikingly moving sex scene. It might have earned laughs had it been dealt with in another way, but the significance to both character and narrative combine with its stark human honesty to make what’s possibly one of the most vital scenes of its kind in cinema.

The interim years between this picture and the brilliant Synecdoche, New York have offered little more to Kaufman’s career than disappointment and missed opportunities, and the melancholy of all that seems to soak through this incredible film. The loneliness on display is at times so defenseless that you almost feel like a voyeur in Michael’s room. Anomalisa sits in your stomach like a rock and bares its soul to you. Perhaps the souls of those who made it, too.

Anomalisa premiered at the Venice Film Festival and will be released on December 30th, 2015.