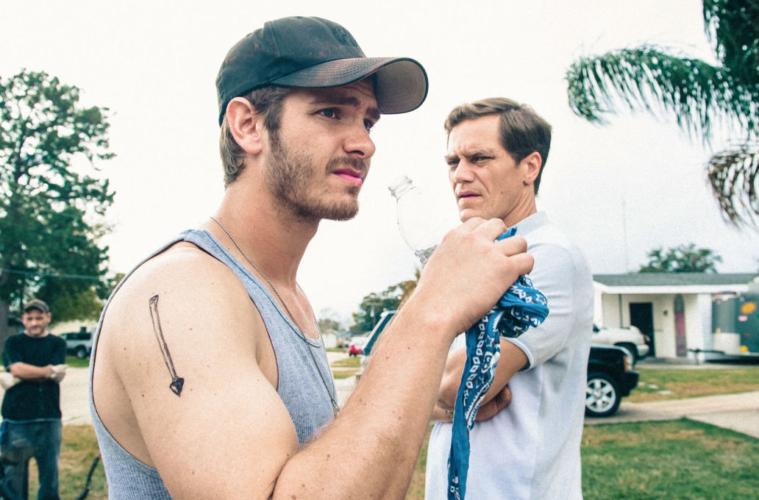 Ramin Bahrani made a name for himself with three independent films over the last decade, focusing on humanity’s daily struggles, reinvented foreign lives in America, and a fundamental sense of decency. With 2012’s At Any Price and this year’s 99 Homes, Bahrani has twice returned to the festival that launched his career, presenting the evolution of those themes. Not coincidentally, the worst years of the financial crisis stand between his acclaimed Goodbye, Solo and the tepidly received 2012 picture, and they must have had a profound effect on the direction of Bahrani’s filmography. With a broader canvas, flashier casts, and a more overt penchant for melodrama, At Any Price and 99 Homes single out agriculture and real estate as the catalysts of contemporary American sufferings.

Andrew Garfield stars as Dennis, a young dad and competent handyman whose skills in building homes seem increasingly ill-suited to a world in which everybody is losing theirs. Whether large or small, homes are just boxes, says real estate kingpin Rick Carver (Michael Shannon, masking General Zod-levels of anger behind an affectedly blasé attitude) while leaving Dennis without one and, then, recruiting him to do the same to others. Desperate to retake possession of the house he shared with his son and his mother (Laura Dern, in a thankless role), Dennis is easy prey for the devilish collector of every box that Orlando has to offer.

Miss a payment on your house and the bank gets it; Carver is just there to expedite and handle things for them. Of course, at some point, he’s handling the whole city and making the rounds in his SUV to survey his possessions like a medieval king. The sun-drenched cinematography (with its blinding whites and Louisiana standing in for Florida) and the depressingly empty streets even give Carver the impression of navigating a real-life-sized plastic model of his latest scheme. Right from the first big sequence – an early, gripping confrontation in which Dennis’ family is forced by police officers to step outside the house that’s been foreclosed on – it’s clear that Bahrani’s direction is hitting harder than ever. Despite not being a bad film, audiences just never took to At Any Price; things will be surely different this time. Sustained rhythm, urgent framing, and a perniciously overbearing score ensure this second venture into the darkness of a systemic failure will not be forgotten so quickly. The narrative is tighter, the morals are clear-cut, the focus is unrelenting. For all its empathy towards the very lovable Garfield, the film’s got Carver’s style. At the first hint of uncertainty, it will bury you under a violently convincing argument (‘America does not bail out losers’ seems to be the core of his worldview) and wrestle you into submission.

Co-written by Iranian master Amir Naderi – an inspiration and “older brother” to Bahrani – 99 Homes is too blunt and single-minded to fully realize its potential, but nuance persists in the smaller moments. The affecting, multiple evictions quickly become a leitmotif, each time played out with new layers of pathos by Garfield and Shannon. I only wish that Bahrani didn’t sacrifice some of the ambiguity of his earlier works to get such a point across.