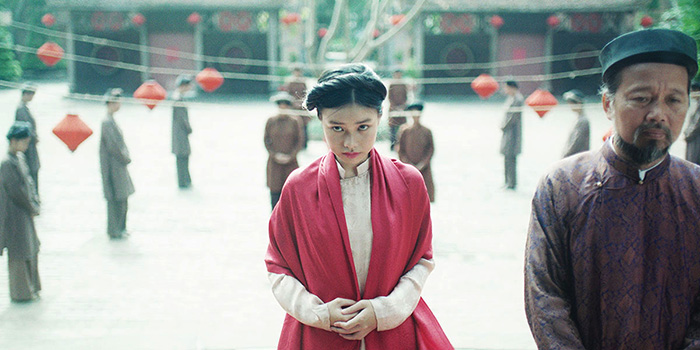 With the hundreds of films premiering at the Toronto International Film Film Festival, one that stood out as among the finest was Ash Mayfair’s The Third Wife. Picked up by Film Movement, the period drama will now get a release next month and a new trailer has arrived for the occasion. Set in 19th century Vietnam, it follows a teenager who is forced into an arranged marriage and discovers a path of forbidden love that will test her freedom.

Jared Mobarak said in our review, “First-time feature writer/director Ash Mayfair introduces us to this world with a series of luxurious set-ups of varying length, sans dialogue to truly allow the environment to overtake our senses. The Third Wife‘s visual poetry shifts through its minimalistic progressions with pertinent information positioned at the frame’s center: an egg yolk running down May’s chest to her belly button, Hung lowering his mouth to eat it, and the aforementioned bloody sheet hanging in the courtyard. A delicate score can be heard before the voice of a singer cuts in briefly, the first words spoken aloud with any impact occurring only when necessary to set the stage surrounding this young bride. It’s to be an auspicious year, one full of celebration soon to make way towards tragedy.”

In the late 19th century in rural Vietnam, fourteen-year-old May is given away in an arranged marriage and becomes the third wife to her older husband. May learns that she can gain status and security if she gives birth to a male child. This becomes a real possibility when she gets pregnant. However, her path is fraught with danger when May starts to develop an attraction for Xuan, the second wife. As May observes the unfolding tragedy of forbidden love and its devastating consequences, she must make a choice, to either carry on in silence and safety, or forge a way towards personal freedom.

The Third Wife opens on May 15 at Film Forum and then expand in the weeks to come, as detailed below.