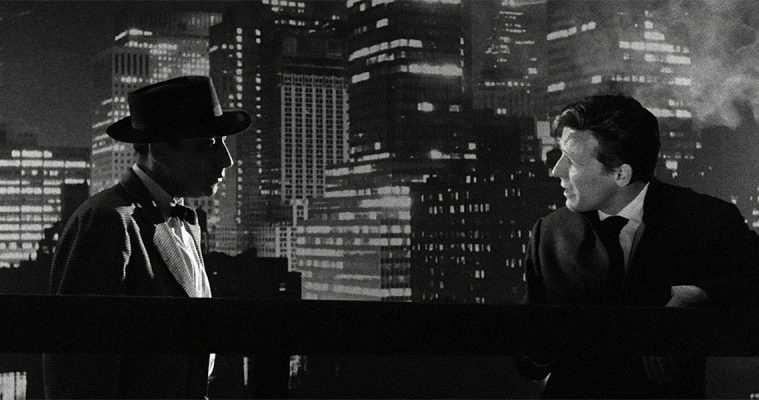 By the late 1940’s, the cityscape of New York seemed to be solidified as a well-trodden noir trope in and of itself, if solely due to the fact that being the supposed ultimate symbol of the post-war Free World made it ripe for subversion; criminal networks and the misdeeds of average citizens crawling under the surface of the booming metropolis. The city’s cinematic presence came even greater by this period’s emergent trend of noir films shooting on-location as opposed to embracing the artifice of a Los Angeles soundstage simulacra of the Big Apple; realism imparted on Hollywood as if a way of making the escapist medium of the movies taken more seriously as an art form.

Yet even the burden of verisimilitude could be flipped on its head by an outsider looking in, as by the end of the 1950s, the metropolis came to be further reconfigured by Jean-Pierre Melville’s Two Men in Manhattan, an American-set “mid-career” work for the French director that was not so much an international co-production but rather outright fish-out-of-water story. The films comes off as somewhat of a noir fantasia in its contrasting of documentary-like hand held shots of New York with baroque interiors shot back in a French studio, which range from Capitol Records to Broadway or even ostensibly modest spaces still art-directed to a high degree.

Though the interior space most important to the action, the United Nations, is swiftly introduced with real footage; our mystery which serves as an excuse for two men to move through a series of rooms revolving around a missing French delegate. The titular two roam through New York in search of him with all but a picture of three women as their clue, they being French journalists, Moreau (Melville himself in a rare acting role) and photographer Delmas (Pierre Grasset). Melville’s decision to cast himself initially seems odd, as his presence, almost more akin to a Peter Lorre villain is not exactly along the lines of the traditional handsomeness or charisma of say a quintessential French leading-man like Jean Gabin. This coupled with him often being deliberately forced to speak in his second language through the course of the runtime doesn’t tip audience identification his way, yet the filmmaker/reporter analogy goes towards figuring the casting out, Moreau is never the crusader nor anti-hero, an observer making a narrative out of the surrounding pieces. The character is at least countered somewhat by Delmas, younger and certainly cooler; living like a French bohemian as at least hinted at by a visit to his messy apartment and an accompanying unnamed sexual conquest.

If these two are unconventional leads, there’s further removal from the genre’s tendencies, chiefly in how brute force doesn’t seem to hang over the film nor the macho weight the two carry (at least outside Delmas’ aforementioned dalliances); violence being represented most by an offscreen suicide attempt. Furthermore judging by the lack of pointed guns or thrown fists in the picture, Two Men in Manhattan doesn’t initially seem representational of a certain chunk of Melville’s filmography, or at least what can be considered the best known works, chiefly the “late” films Le samourai or The Red Circle — films remembered for largely wordless passages, elaborate set-pieces and bleak narratives about honor amongst thieves and assassins. Certainly there was fuel for cynical critics that accuse others of placing more meaning on silences and vagueness in that they could say that simply Alain Delon’s deadpan visage in these particular films gave the impression of art-film elevation to genre tracts. Melville’s final film Un flic even arriving the same year as Francis Ford Coppola’s three-hour prestige crime epic seemed like almost a passing of the baton for the new direction of the genre picture.

Yet watching his 1959 film, it seems unfair to the French director to box him into certain portentous labels. Even the most famous of his 50s works, Bob le flambeur, which seems to take John Huston’s schematic heist procedural The Asphalt Jungle as its urtext, is surprisingly light on its feet; a wholly relaxed film that actually earns the label of “jazzy.” Yet that’s not to suggest that Melville’s defining formal precision is absent from that or Two Men in Manhattan, if just to different, looser ends.

Pinning down this exact “atmosphere,” one can look no further than the post-modern genre riffs of Jim Jarmusch. That American auteur’s well known to be Melville-inspired Ghost Dog: Way of the Samurai perhaps taking more from it than the 1967 film it partially shares a title with. If simply judging by the emphasis on, say, taking the time for extended jazz performances and after-hours diner visits in Two Men In Manhattan as opposed to expository passages, it’s easy to see their shared skill for making mundanity exciting. The audacity of the film is that Melville waits until the final ten minutes for any sense of forward momentum with a shocking act of betrayal from one of the two. Despite its 85-minute runtime being like that of a Phil Karlson or Edgar G. Ulmer B-noir picture, it doesn’t exactly have the same Hollywood-friendly structure.

Though still not quite the work of a “termite” artist, Two Men in Manhattan attests to a filmography more diverse than the cold-blooded formalist association that comes with Melville’s name. If just to look at the contradictions of the film — chiefly a play of realism and fantasy, the political and the genre-friendly, the meticulous and the open-ended — one sees an artist than can encompass seemingly the whole mysteries of the universe, or at least that of New York City.

Two Men in Manhattan screens on Sunday, July 9th as part of Army of Shadows: The Films of Jean-Pierre Melville at the TIFF Bell Lightbox.