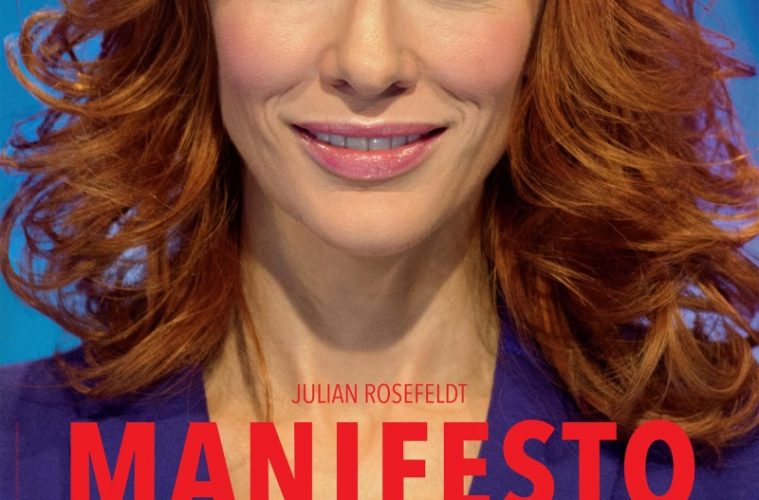 Manifesto starts with a dictionary definition of its title, and pulls off the considerable feat of not being terrible after doing so. Still, I feel confident that it works better in its original form as an art installation. The film is more of a clip show, awkwardly cutting together elements once presented in a drastically different manner. In doing so, it obfuscates the power of a manifesto, allegedly what it means to pay tribute to.

As an installation, Manifesto consists of 13 screens in a space, each one projecting a different 10-minute film of Cate Blanchett reciting speeches cobbled from different manifestos on a similar theme. On each screen, she portrays a different character. As a (male) hobo, she quotes Marx. As a mourner giving a speech at a funeral, she talks about Dada. As a schoolteacher, she instructs her young students with Dogme 95 and Jim Jarmusch’s Golden Rules of Filmmaking. As a housewife, her prayer with her family over dinner is Claes Oldenburg’s “I Am for an Art.” All told, 60 manifestos have been collated into 12 scenarios.

Translated into a film, Manifesto presents these vignettes in a chopped manner, excising around half an hour from the overall experience. A few come out uninterrupted, while most are intercut with others. If in doing so the movie creates its own philosophical throughline, I wasn’t able to identify it. It maintains the overall theme of playing with the source material by editing similar sentiments together and recontextualizing them through Blanchett’s performances, but there’s no flow to the way the sequences are edited. I’m not even sure why they are cut up, other than perhaps a fear of alienating the audience by sticking in one location for too long.

Blanchett’s 13 total performances (in one segment, she plays both a newscaster and a reporter on the ground) aren’t actory showcases in the way we generally think of something being “actory” in film. She gets a different look (and accent) in each one, and a different mode in which to present herself, but there’s a broadness to each role. This is intentional, since each character is an archetype. The movie is most amusing (and the most engaging) when the winking presentation of the archetype jibes with the content of the manifestos they’re announcing. Cate the newscaster and Cate the reporter talk about conceptual art with the exact cadence people in such jobs use when talking about the weather. The schoolteacher explains film rules to her pupils with gentle patience. It’s arch in a way that feels better-suited to the interpersonal vibe of an installation piece than the collective experience of a theatrical film.

Each section makes excellent use of a different part of Berlin, where the whole piece was shot, convincingly creating a dozen different settings that could conceivably be in separate universes. The stark digital crispness of the imagery again befits the museum-wall home the work originally inhabited. Despite the content, Julian Rosefeldt is determined to keep from simply wallpapering the speeches with the visuals, paying attention to Blanchett’s particulars, surroundings, and the reactions of her listeners.

Manifesto is obviously a talk-heavy movie, and the bleeding together of so many different philosophies threatens to erode the potency of the words all these smart people wrote. The film itself doesn’t really have its own statement, rather content to revel in the passion of the manifestos themselves – which, again, perhaps works better in installation form. Apparently, cut from the film are the moments in each scenario, synced to the same time stamp, in which Blanchett addresses the audience directly in a monotone voice, with all 12 disparate manifestos suddenly forming a harmony. That’s the kind of goosebumps moment the feature-length adaptation can’t capture.

Manifesto screened at True/False 2017 and will be released on May 10.