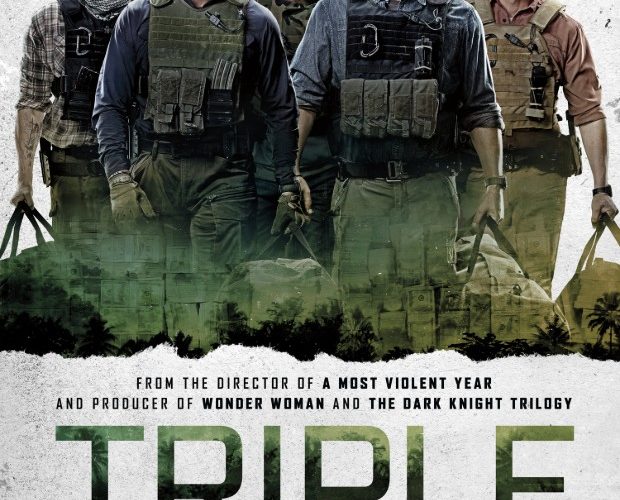 Five Special Forces veterans unleash U.S. fury at the border area of Argentina, Paraguay, and Brazil, otherwise known as the Triple Frontier, in J.C. Chandor’s entertaining if familiar morality tale. Checking off a few boxes in the Netflix algorithm and no doubt relevant to our cartel age, the story is one part getting the band back together, one part Donald Rumsfeldian get-rich-quick scheme, and one part The Treasure of Sierra Madre. If you’re looking for more nuanced artistic fare, add Happy as Lazzaro to your queue. Triple Frontier is at its best when it is simply five guys bro-ing out with machine guns. How compelling that sounds to a viewer will be a strong indicator of whether it’s worth clicking play.

The group of veterans (played by Ben Affleck, Charlie Hunnam, Garrett Hedlund, and Pedro Pascal) are lured back into the game by Santiago (Oscar Isaac), the only one of the five still in the field. He convinces the guys one by one, in the movie’s elongated first half, to use their skills for their own gain. They’re to a heist against Gabriel Martin Lorea (Reynaldo Gallegos), head of one of the biggest drug cartels in South America and your typical selfish cartel ringleader. It’s said that Lorea keeps his millions at his home compound because he no longer trusts banks. The team scope out his property and hatch a plan to break in on Sunday when Lorea sends his family to church. Money being Lorea’s true religion, he stays home with the cash and a few guards stick around to protect him. The team justifies the morality of their mission by taking Lorea out as a fringe benefit to their country. But avarice gets the better of their moral leader, Tom Davis (Ben Affleck). (Side note: the five soldiers call each other nicknames interchangeably with their real names, so for the sake of clarity, I will omit the nicknames.)

In that Isaac’s Santiago is imbued with an Icarus-level of confidence in his plan, he’s a Donald Rumsfeld-type whose patriotism is mutated with hubris and greed. To activate such a plan, one needs someone who assumes moral and ethical authority over the tactics the unit must deploy. In this way, Affleck’s Tom is a Dick Cheney-type. It’s Tom’s job to time and keep the missions on track. When they learn the walls of the house are lined with millions, the guys are excited, but no one more than Tom. He gets overzealous, decides they should take every last dollar, and misses their out time. Uninvited guests sticking around longer than they should about sums up Rumsfeld and Cheney’s legacy in Iraq and Afghanistan as well. With Mark Boal co-writing the script and Kathryn Bigelow having been previously attached as a director, one imagines these parallels would’ve been even more apparent in an earlier iteration.

The getaway kicks off a downward spiral of morally compromised decisions. Beginning with an epic sequence with Russian Mil Mi-8 helicopter (worth the price of admission alone at the single iPic theater showing the film in New York City), it ends with a battered motorboat to visually depict the seemingly once honorable veteran’s descent. Shot by cinematographer Roman Vasyanov (Suicide Squad, Fury), the helicopter sequence provides similar thrills to the climax of Mission Impossible – Fallout without reaching such great heights. He also creates quiet moments with gorgeous imagery, such as Garrett Hedlund falling into slumber fading into an overhead shot of the jungle that informs the psychological dangers that await the five men as greed overtakes their virtue.

Triple Frontier borrows The Treasure of Sierra Madre’s plot but lacks John Huston’s fortitude to analyze and rightly judge the mercenaries. The story frames the veteran’s mission as an act of self-preservation intermingled with desire to rekindle their brotherhood. But their mission to off a cartel leader and steal his money is more more virtuous than Earl Stone (Clint Eastwood) running drugs for a cartel in The Mule. You could call the latter a spiritual sequel to Triple Frontier, with a selfish, down on his luck veteran working for people with whom he ethically disagrees. At least The Mule doesn’t prop Stone up as better than his employer; he’s just as down and dirty. Triple Frontier makes the soldiers pay for their sins and redeem themselves. It makes for a plodding, almost trite narrative that seems engineered for Netflix viewing habits; you can ignore for a few minutes and pick back up without missing a beat. But how Chandor gets to that obvious conclusion in the second hour makes it worth watching the five bro out on one last ride.

Triple Frontier is now in select theaters and hits Netflix on March 13.