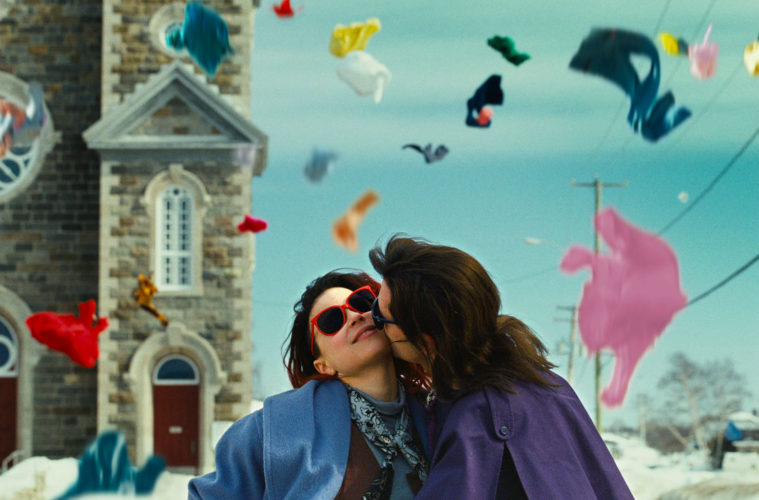 Our friends at Screen Slate, the top resource for NYC repertory screenings, have debuted a slick-looking new website.

Baumbach, working with the late cinematographer Harris Savides, shoots Gerwig with a kind of watchful affection, getting in close as she drives around doing work errands, a hazy Los Angeles sun hitting the windows and Steve Miller Band’s “Jet Airliner” playing. “Are you going to let me in?” she asks another driver in talking-to-herself tones. This is one of the first shots of the movie, which follows Florence for a full eight minutes before introducing Stiller’s title character. In retrospect, it seems like Baumbach is tipping his hand about his interest in Gerwig. His instincts are dead-on; putting Gerwig at the front of the movie allows a hesitant character to make a vivid impression before smashing her into Stiller’s prickly garden of hang-ups and neuroses. Their romantic scrabbling, including a profoundly unsexy sort of sex scene, maintains the uncertainty of mumblecore but with a more articulate form of mumbling.

Listen to a one-hour talk with Jonny Greenwood on his Paul Thomas Anderson collaborations and more:

New York Times‘ Nina Siegal on how Robby Müller created the look of indie film classics, plus watch a masterclass from the director:

For Mr. McQueen, Mr. Müller developed a visual language to capture what appear to be men falling to their deaths in slow motion — a reference to the 1651 suicides of Carib Indians who leapt off a cliff rather than submit to their French colonizers on the island of Grenada, where Mr. McQueen’s parents were born. “Caribs’ Leap’’ is included in the exhibition.

Ultimately, the movies on the list point forward to the future of the art, even if some of that future has already slipped into the past. The Chinese cinema has experienced, in this century, an outpouring of creative energy, thanks to the films of Jia Zhangke and other independent filmmakers there. I hope that the independent Chinese cinema will survive the government’s current wave of censorship and repression. In the Portuguese cinema, the baton has passed from Manoel de Oliveira and João César Monteiro to Pedro Costa and Miguel Gomes; the Iranian filmmaker Abbas Kiarostami, a one-man wave, has been followed by Jafar Panahi and Samira Makhmalbaf. It remains to be seen whether Romania’s one great filmmaker, Corneliu Porumboiu, will be able to coax that country’s rising industry away from its run of script-bound, Euro-generic social realism; whether Hong Sang-soo, currently the subject of a complete retrospective at Museum of the Moving Image, will inspire other filmmakers in South Korea; whether the Mauritanian director Abderrahmane Sissako (who has worked often in Mali as well) and the Chadian director Mahamat-Saleh Haroun will inspire a younger generation of filmmakers in those countries; and whether Germany, which saw its modern tradition broken by the death of Rainer Werner Fassbinder, the emigration of Werner Herzog, and the self-diminution-through-cultural-ambassadorship of Wim Wenders, will again become a spawning ground for daring young filmmakers.