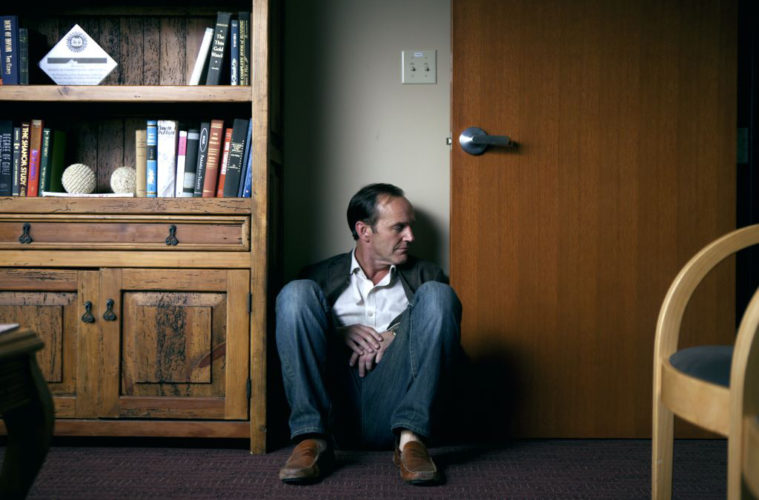 Clark Gregg’s Trust Me is an often hilarious dark comedy, evolving into satire, veering towards drama and then continuing back to where it began. Where it goes after that you may not see coming, except for the fact the film’s very first shot tells you a little too much right off the bat. Gregg, maturing in his sophomore effort as director from his debut feature Choke, does double duty, also starring as Howard, an agent for child actors. He knows the territory as a former child star and he fights for backend deals, ensuring that once the money is MC Hammer-ed away by reckless parents, the checks will still come in.

Down in the dumps, we first meet him in his apartment complex on the way to an audition with Molly Shannon, playing a stage mother willing to take any deal. Little does Howard know his clients will soon be stolen by a rock star in the child actor game, Aldo Shocklee, his rival played by Sam Rockwell, who (as you might imagine) has several very funny scenes. Barging into her dynamite audition, Howard recruits Lydia (Saxon Sharbino), a 15-year-old who seems wise beyond her year. She came to Hollywood with her alcoholic dad, and finds herself cast in a major franchise with Ang Lee at the helm. Helping her navigate the waters, Howard grows protective of Lydia, leading the story into darker terrain. Howard, of course, needs a love interest; here she’s none other than Amanda Peet, a funny, wise-cracking single mom who functions as little more than the required stereotype a movie like this normally employs. Sure he gets her, but she adds some value. Other supporting characters are sadly too thin for their talents, including a brief appearance by William H. Macy as Peet’s boss. Felicity Huffman and Allison Janney also play studio bosses with little remorse.

There is nothing more amateurish than a screenplay about Hollywood, especially one that knows very little, but Gregg smartly keeps this one on the ground floor. It’s not so much a skewering of the business, although I feared that from the film’s first few minutes. Howard is so desperate to land and keep a client, often we sense for morally ambiguous reasons, but he’s right. Howard is one of the good guys; he’s not required to “change,” like he might have in a broader comedy.

Despite its messy tone shift, this is an ambitious and funny sophomore effort from Gregg. As a minor Hollywood satire that works with very little compromise, it’s as stubborn as Howard.

Trust Me is currently screening at the Tribeca Film Festival.