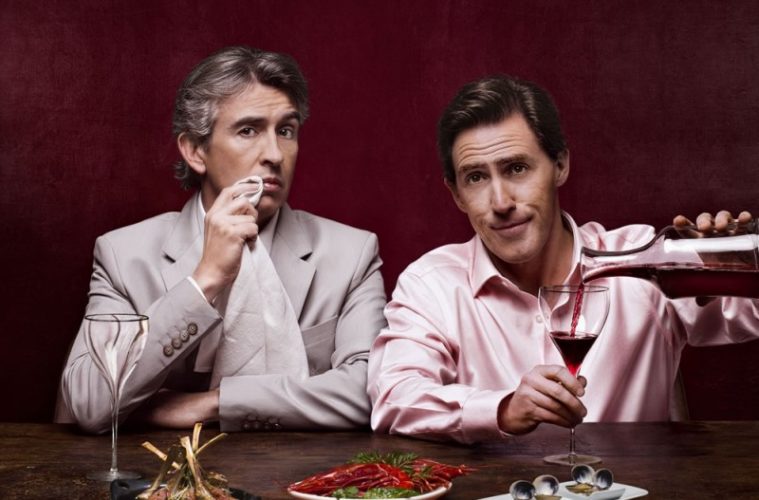 Tribeca Review: ‘The Trip to Spain’ is a Wholehearted, Hilarious Excursion

Averting the bigger is better approach that plagues most franchises, The Trip series is attuned to life’s simple pleasures: cuisine, comedy, and companionship. For Michael Winterbottom, Steve Coogan, and Rob Brydon, their third outing, The Trip to Spain, refreshingly doesn’t stray from the charismatic formula that has resulted in perhaps the most delightful series of films this decade.

Sparing little narrative formalities, as has become part and parcel for these expeditions, Coogan, having concluded a series with Martin Scorsese, and Brydon, eager to take a break from child-rearing duties, set off on another assignment, this time heading to the southwest of Europe. Coogan takes on a Cervantes-inspired “Don Quixote”-esque journey as he reads Laurie Lee’s “As I Walked Out One Midsummer Morning” and attempts to write his own book about his voyage, while Brydon is once again filing restaurant reviews. Aside from the expected, but still as-hilarious-as-ever host of impressions, much of the banter derives from weaving in real-life developments since we last caught up with the pair.

Specifically for Coogan, he’s coming off his double Oscar-nominated journey of Philomena. Never going “five or six minutes” without mentioning the film’s success, according to Brydon, it’s also a point of internal preoccupation for the actor. Along with gauging the awareness about his triumph to those he comes across, Coogan wakes up in sweats after dreams of winning the Oscar, but instead the presenter announces “Steve… McQueen.”

This narcissism is also the backbone of the most humorous sequences. Over dinner, the pair reflect on the many cultural icons that have passed away recently, but their entire remembrance of David Bowie has to do with the one time he may or may not have been thinking of Brydon during an interview, and when he followed him on Twitter. This self-absorption extends more to Coogan, who is trying to get his next script off the ground, one that sounds all-too-familiar to Philomena. However, his agent has dropped him and the screenplay has been taken out of his hands for a “polish” by an up-and-coming writer. “I’ve already up and came!,” Coogan exclaims to his manager.

As was the case for the previous films, whenever these more inherently dramatic conventions take shape, or Winterbottom adds others to the mix, The Trip tends to hit a few bumps. Unexpected pregnancies and more developments in the unshapely last act don’t quite have the spark of when it’s simply just Coogan and Brydon riffing without a care in the world. Then again, this depiction of an idyllic getaway plays into our fantasies, but Winterbottom is perceptive enough to insist even such a privileged excursion doesn’t rid one of life’s problems. This is particularly apparent in a rather daring last scene, taking an unexpected turn that ignites curiosity for where a fourth outing may head. For much of this Spanish excursion, Coogan and Brydon’s “yes-anding” is in full effect, with their playful back-and-forth on fatherhood, aging, and celebrity resulting in no shortage of entertaining quips, including, in perhaps the biggest laugh, a riff on tentative Nazis. The Trip to Spain is also a testament to Winterbottom’s flexibility as a director. One scene brings a seemingly unintentional torrential downpour, but instead of scrapping the day, Coogan and Brydon turn it into a bit, while also making a subtle nod to the “rain in Spain.”

In reviewing one of The Trip films, the base criteria is perhaps different than that for any other feature. Are there laughs? Does the food look delectable? Are the vistas magnificent? Indeed, The Trip to Spain features hysterical impressions of Mick Jagger, Michael Caine, John Hurt, Robert De Niro, Marlon Brando, and half the James Bond actors over exquisitely-presented plates of chorizo, anchovies, flan, and mussels, all while surveying stunning rolling hills and coastal seascapes. For fans of the series, The Trip to Spain gives one a wholehearted meal of all they could possibly desire.

The Trip to Spain premiered at the 2017 Tribeca Film Festival and opens on August 11.