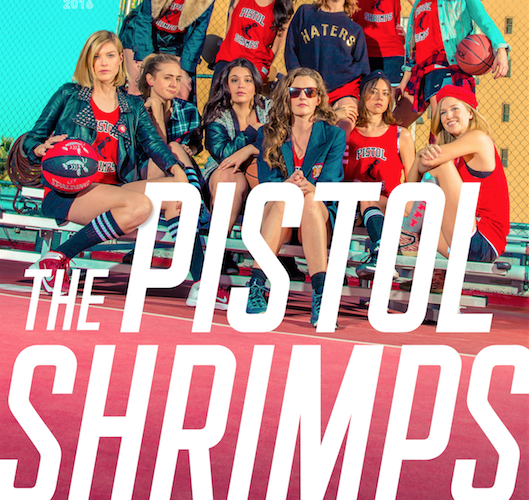 Returning to the form of feature-length documentary to chronicle a subculture and the people that take pleasure in it, Brent Hodge’s third feature The Pistol Shrimps follows a recreational basketball team with a starting line-up that includes comediennes Aubrey Plaza and Molly Hawkey. The Shrimps, started as an impromptu team, inspired the league to grow into something somewhat serious — the team is even required to hold practices now. Oddly the team and the league inspire a podcast (Pistol Shrimp Radio) hosted by Matt Gourley and Mark McConville mixing alt comedy, geeky fandom and sports talk radio as the men become experts on all things Pistol Shrimps. This of course requires more energy, dedication and mental bandwidth than most men would have and, although they’re not the focus, their passion is reminiscent of the men that love My Little Pony, the subject of Hodge’s first feature A Brony Tale.

The Shrimps, an ad hoc team, come from all walks of life: some are comedians, others are actresses, and then there’s Jesse Thomas and Tali Levi-Crouch. Thomas is a recently out singer-songwriter who is the heart and soul of the team, always supportive of her teammates’ endeavors on and off the court. Levi-Crouch is an attorney and talent manager as well as a former model herself, a viable ally to have in one’s court. Through it all the women balance basketball and life in a fun yet rather baffling portrait. While the material is lively there’s the lingering question of why commit to making a feature-length documentary about a rec team?

Hodge approaches the material with a certain spunk while taking the team and the culture its spawned seriously (perhaps even more so than Gourley and McConville) as the team finds themselves in the championships. The other teams with creative names like Slam Drunk, SheCago Bulls, Kareem Abdul Jababes, Peaches & Kareem, and Space Glam are in a state of disbelief that Aubrey Plaza’s crew has pushed ahead.

Plaza is the kind of comedian who thrives on awkwardness and misdirection; after an injury (playing for another team) she defends her interest in the Pistol Shrimps as legit — she’s in it to win it. As far as sports documentaries about female friendships, there are too few and Pistol Shrimps, as enjoyable as it is, really is exactly what it is — like the league and the podcast it’s something to do. Surely one’s free time can be better spent elsewhere screening a film that’s more profound, but that is not what this is, the same way this rec league is not the WNBA. Frothy and brief, with a few big laughs, the film never overstays its welcome even if I wish it was a little more like Whip It, with a little more heart and warmth and a bigger dose of bad-ass girl power.

The Pistol Shrimps premiered at the 2016 Tribeca Film Festival.