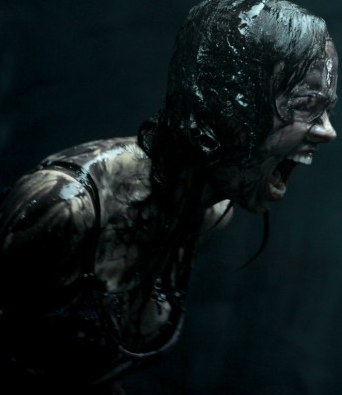 What is it about interstellar travel that seemingly halts an advanced species’ sense of sophistication? If Hollywood and the internet conspiracy cultists are to be believed, the minute you reach the cultural pinnacle of voyaging beyond your own galaxy and meeting new life, you revert back to primitive tendencies beffiting Neanderthals or frat boys.

How else to explain the behavior of all those little gray men that think a good Saturday night’s entertainment is zipping over the drive-in and flashing your tractor beam, vivisecting unsuspecting cows, or rectally probing harmless, paranoid hayseeds? Outside Klaatu, E.T. and A.L.F., there aren’t too many self-respecting and gentle examples of enlightened space travelers.  Don’t expect the Vicious Brothers’ new horror movie Extraterrestrial to raise that profile any. In fact, this glorified slasher film also lowers the already dwindling intelligence level of movies associated with evil aliens.

Not really brothers or named Vicious, creators Colin Minihan and Stu Ortiz trade-up the hand-held grittiness of their found footage ghost chiller Grave Encounters for a more traditional and technically spiffy look that shows off what can be done on a small budget when you are intentional with your resources. The movie looks great, but none of that careful effort was expended on the script. Following the misfortune of five generic college kids whose wilderness getaway is interrupted by unsavory invader types, Extraterrestrial may play best as a genre scavenger hunt. A complimentary game-sheet of alien abduction tropes complete with checkboxes would enhance audience interest in what’s happening on screen, while making the plentiful idea theft on display go down easier.

The filmmakers want to mix comedy and thrills, but they never really hit the mark with either. The movie plays its brittle stereotypes and obvious plot devices with a sincerity that’s misplaced. Most of the first act hits many of the same beats as Cabin in the Woods, but unlike that film, this one never follows with a deconstruction of its own artificial nature. There are moments when that sort of meta-lampooning seems imminent, especially with the arrival of Michael Ironside as a grizzled, pot-growing recluse who knows all about the government/alien stalemate.

Ironside growls, grins and waves around the expected redneck firepower, all while wearing a shirt with a big hippie smiley face on it. He’s absolutely the most interesting character in the film, and when he heads off to take out a few of the monsters, we’re left wishing that the whole film had just been a battle royale between this crazy vet and the aliens, the cannon fodder kids be damned. There’s also a curious sheriff played by Gil Bellows, who has personal reasons for hunting down the monsters, but like Ironside, his character exists only to be colorful window dressing. The only two kids we really get to know are Brittany Allen’s April and Freddie Stroma’s Kyle, but their relationship turmoil is insignificant in the face of all of the running and screaming that gets underway.

As a technical exercise in film production, Extraterrestrial is really quite strong, and it’s clear that the primary reason for its existence is as a calling card to studios and directors looking for a mainstream helmer for the next remake, reboot or sequel. The Vicious Brothers seem to have Spielberg in mind, and trot out deliriously canted angles, piercing flashlight beams in the gloom, and an emphasis on hovering spaceships that are designed to produce more wonder than dread. The aliens themselves are disappointingly standard issue, but their presence is established through suggestion and implication, rather than full-on visual contact. A few scenes even end up being halfway inspired, including an abrupt and shocking instance of anal probing, bewilderingly glimpsed from the probe’s POV. The abduction sequences are also worthy of note; an opening prologue features a gas station clerk walking outside to see the telephone booth dropping from the sky, its occupant inexplicably vanished, while another scene slows down to watch the victim hover gently above the ground before being violently yanked upward.

The film’s closing shot, that tracks backward across a cruelly ironic tableau of government cover-up, unfolds to the cheerfully cheesy tones of Norman Greenbaum’s Spirit in the Sky. The intent and construction of that moment suggest what Extraterrestrial might have been were it actually willing to take a few risks with its material. Now, it’s just a shoddy rehash of ideas that went out of favor with the end of The X-Files. At first, the Vicious Brothers looked to be channeling that show’s classic episode, Jose Chung’s From Outer Space, that glibly targeted all of the sacred cows Fox Mulder—and other conspiracy enthusiasts like him—held so dear. Regrettably, where we end up is more reminiscent of the climax of the first X-Files film, as our heroine runs about the dank but fabulous alien spaceship, trying to save her beloved and desperately looking for a plot that matters.