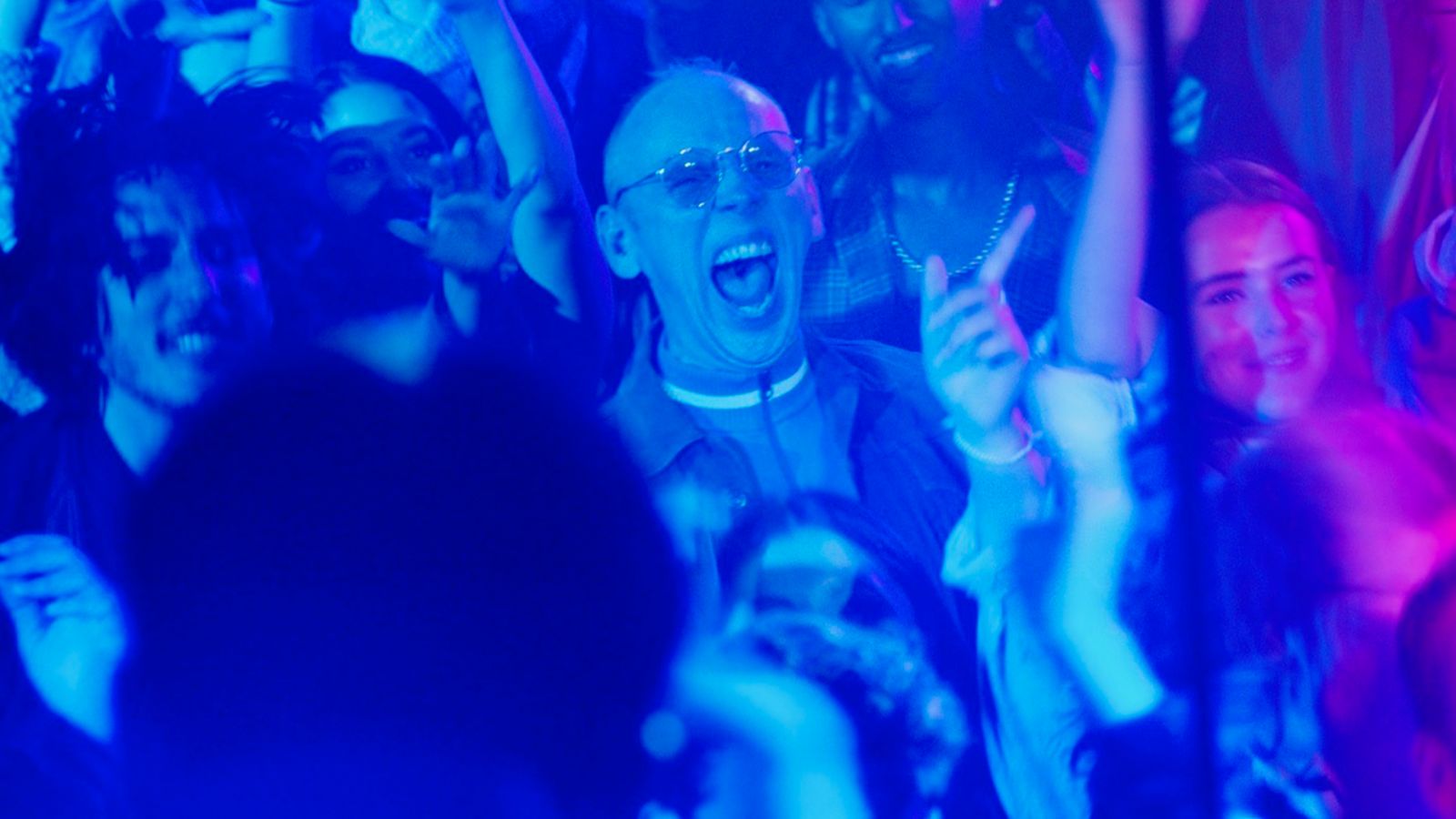 Summer 2021 is the 25th anniversary of one of the biggest concerts in British music history: Oasis at Knebworth. (Documentary coming soon, of course.) The two-day event saw 250,000 mad-for-it fans of Liam and Noel Gallagher swarm the grounds of a country house in southern England for a murderer’s row of Britpop heavyweights. No performers stood taller that day than the headliners, the brash, Beatles-meets-Sex-Pistols from Manchester. For a brief period of time, Oasis was the biggest rock band in the world. None of this––literally none––would have happened had it not been for a sarcastic, caustic, hedonistic and drug-fueled Scotsman named Alan McGee. As his biopic Creation Stories opens he is introduced as a “music industry kingpin, guru, and former head of Creation Records.”

That is all true, though as a title card reads, “Most of this happened. Some of the names have been changed… to protect the guilty.” One’s interest in the time period and its music is likely the determining factor for enjoyment of Creation Stories. If you love Definitely Maybe, Loveless, Bandwagonesque, and Screamadelica, you will undoubtedly find much to savor. There are only a handful of films set during Cool Britannia and Britpop––most notably, the sour Kill Your Friends and ho-hum How to Build a Girl––but director Nick Moran’s Creation Stories is certainly the strongest. While it undoubtedly embraces the hedonism of the music industry during the period, above all else it savors the art that was being made.

Perhaps its greatest win is the casting of Ewen Bremner as McGee—the most perfect bit of music cinema casting since Philip Seymour Hoffman played Lester Bangs. The presence of the cheerfully anarchic Bremner, a.k.a. Spud, is not the only link to the What’s the Story (Morning Glory)? of mid-1990s UK cinema, Trainspotting; that book’s author, Irvine Welsh, is co-writer here, while Danny Boyle is on-hand as executive producer. Trainspotting vibes course through Creation’s veins, from several allusions to its infamous toilet-dive to a handful of nightmarish fantasy sequences that try (though fail) to equal the baby-on-the-ceiling of Boyle’s classic.

We meet a teenage McGee in grim 1970s Glasgow, lip-synching to Bowie with a T. Rex poster on the wall. His abusive father is displeased at the sight––specifically the eye-shadow––but there is something to this skinny young dude. “I didn’t have any talent, which limited options,” Bremner states in voice-over. Seeing the Sex Pistols’ infamous, expletive-fueled appearance on the Bill Grundy show changed his life. (This is fitting since, at his height, McGee exuded a Malcolm McLaren-ish vibe.) “I don’t need talent,” McGee realizes. “I just needed a guitar. And some mates.”

Some lean years follow, McGee and friends attempting to make it as a punk band in London. “By the time we got to London, punk was over,” he says. But seeing a triumphant post-punk band called Television Personalities pushed him in a new direction. Soon, McGee was running a budding label and finding his calling as a manager. As the film shows, these bands were not easy––the Jesus and Mary Chain were chaos incarnate, while My Bloody Valentine’s Kevin Shields burned through Creation cash and barred McGee from the studio––but the music was glorious. The rise of the label’s key artists (and explosion of Acid House) take McGee’s career and excesses to a higher level than ever before. But the peaks for both were still to come.

From the film’s start, Creation Stories of course cannot wait to get to Oasis. After all, McGee’s adult life was centered on the discovery of the Gallagher brothers at Glasgow’s King Tut’s Wah Wah Hut in May 1993. By this point, Creation was owned by Sony, but as McGee explains, the major label “didn’t care that we were the coolest label on the planet. We had to deliver a band that was gonna sell multi-millions. A band that could justify their investment.” It was a missed train that led McGee that fateful gig, and Moran relishes the opportunity to bring the night to life. “From the moment I was born I was meant to miss that train,” Bremner’s McGee says with the confidence of a man who, in his opinion, joins Brian Epstein, Peter Grant, and McLaren as “one of the greatest rock managers in history!”

However, the rise of Oasis was also the moment McGee lost his grip––mentally, physically, just about every way. And from this point on Creation Stories is a bit of a maudlin mess. A lengthy sequence in Los Angeles is particularly weak. It does, however, give the wonderful Jason Isaacs a chance to barrel into the movie as an LA-based expatriate movie producer, looking like Errol Flynn meets Star 80-era Eric Roberts. (“How was rehab?” McGee asks. “Smashing! Best ever,” he replies.) A later submersion into McGee’s involvement with Tony Blair’s New Labour movement is another detour that is not wholly uninteresting but lacks the aesthetic verve and narrative urgency of what came before. Yes, this story needs a comedown following the highs, but these simply do not match McGee’s musical exploits.

At nearly two hours, Creation Stories is at least twenty minutes too long; the framing device featuring Suki Waterhouse as a young reporter interviewing McGee could likely have been excised entirely. Yet for all its missteps, Creation succeeds as a story of music biz highs and hubris. “For all the shenanigans I got up to,” reads a closing quote from McGee, “at the end of the day I only ever truly cared about the music.” This is an unquestioned fact, and it is celebrated by Creation Stories. With a gobsmackingly epic soundtrack and just the right amount of nostalgia, Creation is a flawed but pleasurable experience. File it next to documentaries Live Forever and Supersonic as chronicles of the last days of real rock stars and colorful moguls––then hit play on the soundtrack.