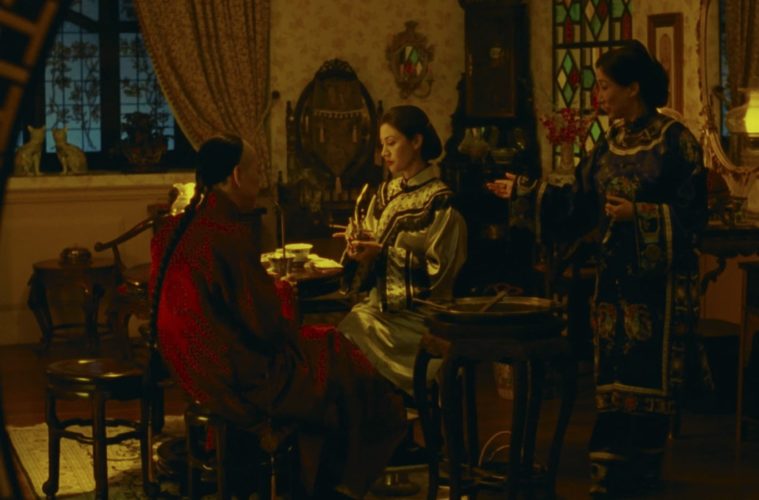 Getting over my grudge that one hasn’t really seen Flowers of Shanghai unless seen on an abjectly hideous all-region DVD taken from your college library, I can acknowledge a 4K restoration of Hou Hsiao-hsien’s masterpiece as essential beyond essential. A milestone in the most seminal of contemporary careers and (even in a fuzzy transfer) one of the most enveloping movies of its time, this is cinema for which neglecting of any sort simply will not stand.

And you can see it starting tomorrow, courtesy Film Forum, in advance of which there’s a trailer showing off the work conducted by Shochiku and Shanghai International Film Festival, who worked from the original 35mm negative. No joke, no exaggeration: seeing even just a bit of this on a browser window in a compressed version felt like a warm bath for my eyes.

An intoxicating, time-bending experience bathed in the golden glow of oil lamps and wreathed in an opium haze, Hou Hsiao-hsien’s gorgeous period reverie traces the romantic intrigue, jealousies, and tensions swirling around a late 19th century Shanghai brothel, where the courtesans live confined to a gilded cage, ensconced in opulent splendor yet forced to work to buy back their freedom. Among the regular clients is the taciturn Master Wang (Tony Leung Chiu-wai), whose relationship with his longtime mistress (Michiko Hada) is roiled by a perceived act of betrayal. Composed in a procession of entrancing long takes, Flowers of Shanghai evokes a vanished world of decadence and cruelty, an insular universe where much of the dramatic action remains tantalizingly offscreen—even as its emotional fallout registers with quiet devastation.