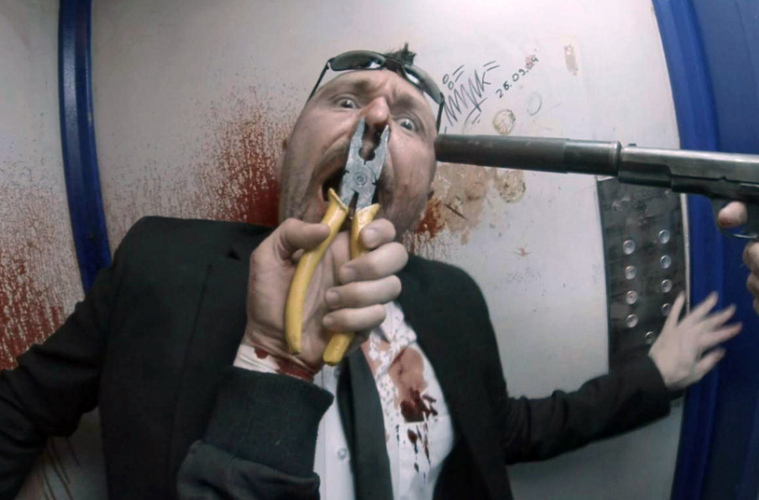 While the top brass in Hollywood are attempting to find ways to better immerse audiences when it comes to the theatrical experience, a new film puts us into our lead’s perspective — for the entire runtime. You’ve likely seen some of the videos from director Ilya Naishuller (if not, the most famous can be seen below) and now he’s helmed his first feature film in the same style with Hardcore.

Produced by Timur Bekmambetov and starring Sharlto Copley, Danila Kozlovsky, Haley Bennet, Andrey Dementiev, Dasha Charusha, and Sveta Ustinova, a new trailer has now arrived. Following a cybernetic super-soldier who “kicks, punches and parkours his way across Russia to save his wife from a psychotic paramilitary psychic bent on world domination,” from this trailer it seems like this could easily wear one out in the first few minutes. We’ll find out soon if that’s the case as a Midnight Madness premiere at TIFF is set for tonight.

A lot can happen in a Moscow minute, and in Hardcore you will experience every delirious second through the eyes of Henry, a newly resurrected cybernetic super-soldier tasked with saving his brilliant wife Estelle (Haley Bennett) from a psychotic paramilitary psychic who aspires to make it in the world-domination racket. With guidance from the eccentric Jimmy (a sublimely silly Sharlto Copley), Henry will punch, kick, parry, and parkour his way across Russia, battling all manner of gun-toting, sword-wielding, flame-throwing mercenaries — as you watch from the driver’s seat.

After breaking the Internet with a jawdropping first-person-perspective music video for his band Biting Elbows, director Ilya Naishuller doubles down with his debut feature. Once again delivering outrageous, unbroken POV action, he pushes the conceit to dizzying heights, hurtling the camera through a parade of breathless spectacles. Assisted by a team of fearless cinematographers and stunt performers, Naishuller’s astonishingly propulsive style — recalling the mechanized gaze of James Cameron’s and Paul Verhoeven’s respective cyborgs, as well as the hyperreal aesthetics and minimalist narrative architecture of first-person video games like Half-Life and Mirror’s Edge — gives us a new breed of action movie that’s practically a pure distillation of the genre itself.

So strap yourself in, put your helmet on, and apply all the action-movie adjectives, because this time they ain’t just spewing hyperbole: Hardcore is a non-stop, action-packed, white-knuckle, crackerjack thrill ride, and once it starts, there is no getting off!