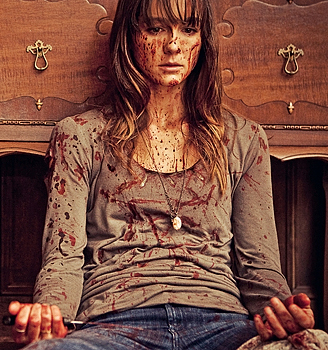 No matter how nice it starts, when a film is part of the Midnight Madness sidebar at TIFF, something twisted is almost guaranteed to occur. After premiering A Horrible Way to Die just a year ago here, Adam Wingard‘s newest horror/thriller You’re Next lets us know right off the bat what we are in for. The bloody opening scene reveals the brutal killers donning animal masks and hints at the fun ahead. The victims in the first few minutes are neighbors of the Davison family, who are celebrating a 35-year-wedding anniversary and a reunion with their four children. Crispian Davison (A.J. Bowen) and his girlfriend Erin (Sharni Vinson) are the first to arrive as their parents (Rob Moran and Barbara Crampton) are spooked, hearing noises in the house.

This is soon settled and more family members arrive with additional significant others, but it isn’t long before the men in masks start terrorizing again. The only question going through my mind was how the screenwriter (Simon Barrett) would find time to kill off this crowd in under 90 minutes. Let’s just say I had no more questions at the end of the film.

It isn’t that the many kills are new and inventive, it is the sheer brutality with which they arrive. The impeccable sound design makes sure each crossbow arrow (the main weapon of choice) penetrates not only the skulls of the characters, but your eardrums as well. Mads Heldtberg‘s original score has a slight electronic touch to propel us through each and every tense moment.

Wingard, working here with cinematographer Andrew Droz Palermo, incorporates an off-the-cuff style with the camera freely moving around this house. He then chooses his “money shots” wisely, including a slow-motion tracking shot of one of our characters attempting to bolt out the front door. I won’t tell you if it ends well. Another scream rings out upstairs and Wingard uses a single slowed-down overhead shot of our group running up the stairs, in order to pause the chaos for a brief moment before upping the tension again. It is miniscule choices like this that add substantial flair the film. This is all-around smart horror filmmaking and writing, with Barrett injecting humor at the perfect moments. Horror director Ti West cameos as a boyfriend and before the mayhem begins, there is a dinner table exchange in which his character reveals his occupation as a filmmaker. Joe Swanberg (as one of the brothers) pokes fun about his “underground” film festivals and how documentaries like the one West made should be just condensed to short commercials, drawing big laughs from our press & industry screening.

Despite being able to guess who the bad guys are early on and the fairly generic motivation driving them, You’re Next is a witty take on a tired genre. With certain scenes reminding me of the final act of Straw Dogs, if you are in Toronto I encourage (nay, demand!) that you choose this over that remake hitting theaters this weekend. For everyone else, expect this one-house horror/thriller to get distribution mighty quick.

You’re Next is now playing at the Toronto International Film Festival.