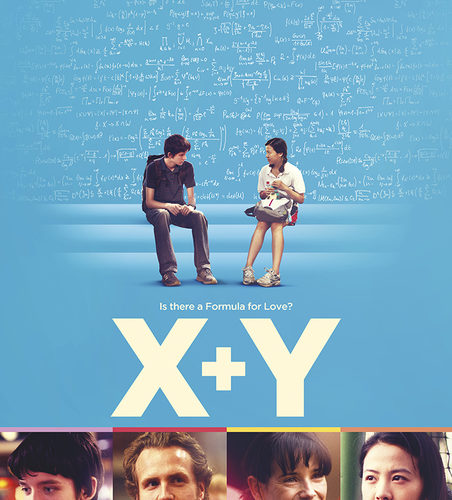 Inspired by his 2007 documentary Beautiful Young Minds, the feature narrative debut of Morgan Matthews, A Brilliant Young Mind, is a confidently directed version of an underdog story that we’ve seen before. Following in the footsteps of Good Will Hunting, Matthews, like Gus Van Sant, crafts strong compositions and effective montages to externalize the internal emotions of his characters while the story’s mix of social realism, humor and drama recall the best works of Stephen Frears.

Asa Butterfield stars as Nathan, a young man on the autism spectrum supported by a loving family, including mother Julie (Sally Hawkins) and Michael (Martin McCann). After a tragic accident, Julie is a widower dealing with the challenges of raising a son who refuses to combo meals that don’t contain a prime number of items. Seeking help through his school, he’s paired with a mentor Mr. Humphreys (Rafe Spall). Humphreys, a former wiz kid now suffering with MS struggles socially like Nathan, he reassures him and Julie that Nathan will be fine. Taken under the wing of a coach, Richard (Eddie Marsan), Nathan is shipped off to China to study for the Mathematics Olympiad in a joint program with the Chinese team. A fish out of water in his native London, the pressure is compounded as Nathan navigates his new surroundings lost even amongst friends. At the conclusion of one particularly challenging study session he’s told frankly by a fellow team member that “it’s called adaptation, sometimes we have to change our shape to fit in.”

X+Y refuses to conform to the tropes of the feel-good sports underdog film while it contains the familiar elements. While the screenplay by James Graham is competent and effective, the direction by Matthews elevates the material beyond simple melodrama. The externalization of the internal is a common method in many a math genus picture (Good Will Hunting and A Beautiful Mind used visual devices to simulate how the genus brain calculates information). Here the device is turned on its head as Matthews confidently uses devices, including carefully executed handheld photography to heighten memorable and potentially traumatic moments. His camera floats as details are frantically missed amongst the shock. Matthews is fully in control of material, crafting an often exciting, non-linear formal opus. Formal devices aside, A Brilliant Young Mind also succeeds on the strength of its performances. Here Spall carefully crafts a sympathetic burn-out. Hawkins and McCann give especially beautiful performances as parents dealing with a special son. After Michael is killed in act one, the death is left unprocessed by Nathan, incapable of emotion, extending even later as he meets Zhang (Jo Yang), a lovely Chinese girl who shows interest in him. Perhaps the most important discovery is Yang, who flawlessly plays Zhang, a fellow genius doomed to a life pre-ordained. She’s given more complexity than your standard issue teen romance interest.

A Brilliant Young Mind is a rich character study mediated through Nathan’s lens. Butterfield gives one his best performances capturing a kind-hearted young man; he successfully externalizes what Nathan has tremendous difficulty sharing. Despite expected plot developments, X+Y is a textbook in how to create a film that contains all the expectations a plot such as this evokes while feeling fresh and exciting. It’s a confident debut from a documentary filmmaker who has successfully transitioned into fiction, although given its source material, the real-life Nathan’s tale is a little stranger than the one on screen here.

A Brilliant Young Mind premiered at TIFF and opens on September 11th, 2015.