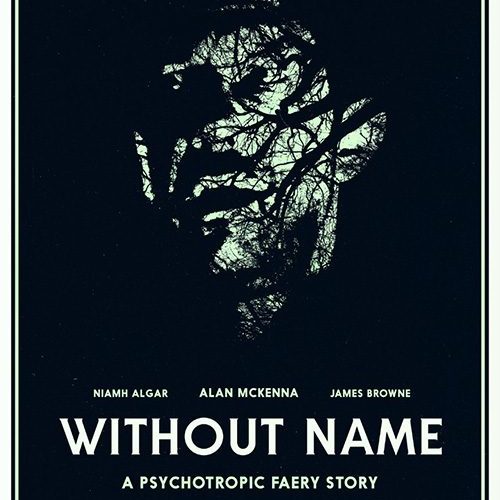 For someone afraid of loneliness, Eric (Alan McKenna) sure loves putting himself in positions that can’t help isolating him from the world. A land surveyor who specializes in remote areas and works by himself unless apprentice-of-sorts Olivia (Niamh Algar) can tear herself away from her thesis to help, his long hours and extramarital affair (also when Olivia can put down her studies) risk destroying a marriage already on the rocks. He must work to keep his family together and therefore alienate them in the process. He needs human interaction while doing so and therefore starts an affair that could very well leave him without wife and mistress. Eric is trapped in a never-ending existential crisis, saddened by nature’s destruction via cement and yet on the destroyers’ frontline fighting.

Director Lorcan Finnegan and writer Garret Shanley‘s feature debut Without Name opens as Eric finishes one job and begins another. This latest endeavor is massive: a fogged-over forest of trees for which his employer assures is private property in search of utility. It’s a job, his client (Morgan C. Jones) isn’t worried about outside interference, and the money is good. So he goes out each day taking measurements, discovering something in the mist. A figure appears for a second before disappearing, the daytime foliage changing to an otherworldly gray of night without warning, and his data goes on the fritz. He can’t wait for Olivia’s arrival, begins to go stir-crazy, and lets his curiosity leaf through the eccentric scribblings of his cabin’s previous lodger Devoy (Brendan Conroy).

This is where things get interesting. Thanks to local hippie — for lack of a better term — Gus (James Browne), Eric is educated about the land he’s assessing on the sly. It’s a patch of forest without a name, one rumored to house a fairy world that will consume you whole if you aren’t careful. People stay away for the most part, especially since Devoy was found catatonic and half dead a short distance from his home. Gus jokes how Eric better turn his clothes inside out to confuse the fairies and escape their clutches, both letting the folklore remain folklore. But our newcomer suddenly hears voices as Devoy’s research into the language of trees resonates, the forest shifting ever so slightly via a visual trick of cinematographic magic.

The endeavor proves creepy if slight when it comes to story. We don’t really learn anyone’s motivations besides Eric, the rest of the characters arriving to usher him forward into the unknown abyss of insanity. This isn’t necessarily a bad thing since we don’t really care about the others outside of their context in his life, but it does make them feel rather two-dimensional. Olivia is there to help with work and alleviate her boss’ stress in bed. Gus serves as local historian and obvious suspect once things begin to go awry. A mushroom trip with the two of them alludes to secrets being told out of turn, but nothing comes of it except for the first epileptic seizure-inducing strobe montage of trees and man merging into one.

Eric is the originator of this vision and therefore once more cemented as our focal point in the narrative. We almost can’t wait for the others to recuse themselves from the action so we can watch him react to his isolation with madness and nightmare. The final third of Without Name proves a chilling puzzle of parallel dimensions and fractured psyches revealing a chicken or egg type conundrum of spiritual exchange. Perhaps there’s something to Devoy’s ramblings, the aura of nature calling to man from another realm of consciousness not out of curiosity but necessity. Those who hear the invitation are lucky and tragic. They become cognizant of a more expansive existence than anyone could ever know and yet doing so leaves behind everything they do.

Finnegan ratchets up tension throughout with a few red herrings — constantly revisiting Eric’s boss feels exciting because we think we’ll learn a nefarious backstory about his acquisition of the land that never arrives — alongside some stunning aesthetic choices in the woods. Whether the doom and gloom of a rolling fog or a beautifully mesmerizing scene of Olivia lost as the forest moves around her like she’s trapped within a funhouse of distortion mirrors, we authentically embrace the idea that there’s more than meets the eye. The latter is Olivia’s main purpose for inclusion in my mind because it is the only time we see the trees reacting to someone that isn’t Eric. He’s involved, so it could still be in his head, but just maybe everything is real.

It all builds to a rousing finale of interior and exterior settings cut together without time passing. Eric starts to vibrate between venues as though body is separating from mind while Finnegan introduces more horror elements and the visuals deconstruct into a hypnotic kaleidoscope of positive and negative imagery transporting us from one side to the next. I recalled last year’s The Duke of Burgundy and its magnificent collage of flapping wings — one scene here captivating in slomotion as a butterfly’s rapid movements gust enough to spin a chandelier. Abstract meets representational in a dance of confused distortion as the ending blows away everything that came before in intrigue and formal elegance. This payoff ensures Without Name‘s success; I’m just left disappointed the journey there felt somewhat hollow.

Without Name is currently playing at the Toronto International Film Festival.