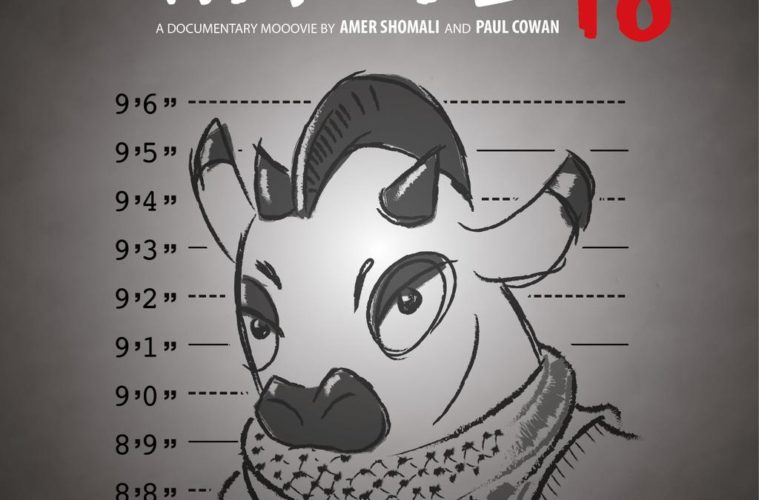 Who knew cows could be a symbol of freedom, resistance, self-sufficiency, and identity? On the surface it’s absurd and yet they became Palestinian town Beit Sahour’s greatest weapon against the Israeli occupation during the First Intifada from 1987-1993. When you’re taxed by a foreign government, forced to purchase its goods and services rather than create your own, and treated as slaves, any source of autonomy can transform the common into mythical heroes poised to tear down walls. It may have started on a whim, but producing Palestinian milk catalyzed a town-wide boycott before proving to be the largest thorn impaled in Israel’s side. And while animator Amer Shomali may recall the cattle itself taking on a superhero air via comic books in his youth, The Wanted 18 ultimately sheds light on the community that made them famous. We’re talking farmers, butchers, doctors, and college students all banding together around these cows as though they were black and white gold. As those involved on both sides of the fight tell it—Shomali and co-director Paul Cowan include interviews with a couple men on the Israeli side of the ordeal as well—those animals were worth even more. Their presence afforded Beit Sahour a confidence few other Palestinian sectors possessed. They were already the most dangerous threat to the occupation being known as the educated Christians embracing non-violent civil disobedience. Now they could hurt their enemy economically with far greater impact than merely refusing to pay taxes. With the excitement taking real strides towards showing the world how the Palestinian people could come together constructively, however, also came a sense of fear. Success always does.

The Wanted 18 is gorgeous to look at with high production value placed on actor reenactments, Shomali’s humorous stop-motion cow interludes, and the interviews themselves shrouding subjects in shadow while they reminisce about this hopeful moment in their history. To me the most interesting piece was hearing them talk about the West Bank as an actual community—Israeli occupation be damned. Like Shomali says in his narration, he’s never seen Beit Sahour with his own eyes even though he knows it’s home. Raised in a Syrian refugee camp like so many others, to him the mere idea of a Palestine was fiction. Palestinians were cartoon heroes seeking justice in a country no one alive today may ever see re-established. So to hear from citizens that lived there talking about victories without suicide bombers is a wonderful thing. It isn’t all fun and games, though. This film may show exactly how the tide turned albeit very much from a one-sided perspective. By the end of the cows’ story there will be a senseless murder, false peace, and an ethnic demoralization that most certainly played a huge role in subsequent rebellions turning as bloody as they have. In this regard the tale of Beit Sahour is that much more profound because it shows that violence wasn’t always the answer. Whether Israel shot first without provocation is a question for another movie. This one simply explains how deeply under the Israeli skin these Palestinians burrowed by doing nothing more than milking cows. The simplicity of it, the effectiveness of it, and the solidarity these men and women showed is inspiring to behold and absolutely worth immortalizing.

It’s comical to boot too in a way that engages its viewers to truly revel in the activism on display. Whether it’s the animated, exaggerated internal musings of the cows—crazily zen Rivka, Palestinian-hating Ruth, sexy Lola, and agitator Goldie—helplessly thrust into this adventure or the laughable facts like how Israeli military went around town with photos of the actual cows in-hand to ask whether anyone had seen them after they went into hiding, the story is too insane to not be real. Between the milk, a trio of women covertly sewing Palestinian flags for the youth to post around town, and the intelligence of those brought in for questioning to turn the tables on their captors, the First Intifada was textbook peaceful revolution. And hearing how it fell apart makes you wonder if it could ever happen again. If nothing else, The Wanted 18 assists the possibility it will by educating those unaware of Beit Sahour that civil disobedience has worked before. It’s PG-rating despite a few “shits” thrown about—mostly by the cows—also positions it to teach the youth about an intelligent alternative to the violence that rages today. New generations of Palestinians shouldn’t believe the extremist stance the world now equates with their cause is the only way to get noticed. Their people are smart enough and resourceful enough to orchestrate attacks without bloodshed and at a time where dissent towards the Israeli front is high, any show of being the “bigger” man in this fight is powerful. Shomali and Cowan show us the potential of uniting on the ground and ignoring a leadership too far-removed from the violence itself. Cows before bombs.

The Wanted 18 is playing TIFF as part of the TIFF Docs program. See our complete coverage below and the trailer above.