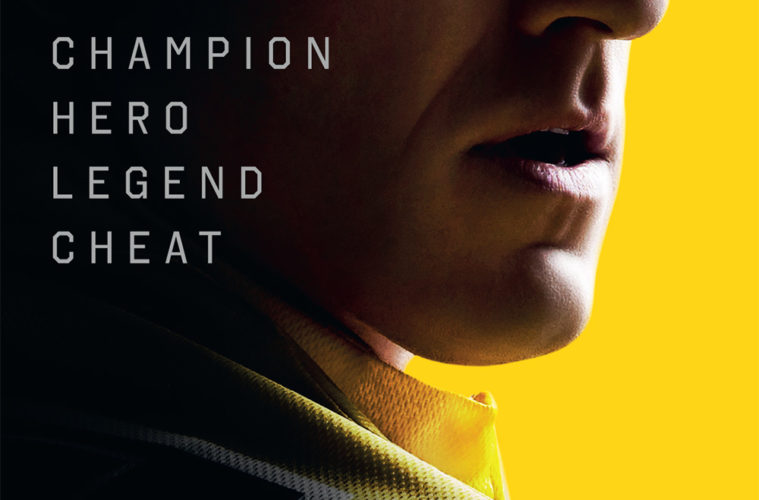 When you think about what Lance Armstrong did to the sport of cycling—winning seven straight Tour de France titles before finally being revealed as a cheater—you have to laugh. It’s funny how much stock people around the world put in professional sports and athletes only to see their fallibilities as a betrayal. Celebrities in other vocations screw up all the time; some have found their fame specifically for screwing up. But there is integrity to athletics that must not be tainted in the public consciousness. Somehow sports aren’t purely for entertainment because if they were we wouldn’t care that Armstrong doped. We loved him while he did it and that fact will never disappear. I sincerely hope that both screenwriter John Hodge and director Stephen Frears understood the farcical nature of his story because I want to believe the comedy streak running throughout The Program is intentional. It’s so rampant and Frears so accomplished a filmmaker that it must be so. Armstrong (Ben Foster) is purposefully painted as a villain because in the general public’s mind he now is. Ignore the millions of dollars he made for cancer research, the millions of downtrodden he inspired to “live strong,” and the billions of fans he brought a smile to for seven years—he fooled us and we will not stand for it.

So why not render this story as what it is: one man’s systematic deception on an international stage. What he did was premeditated, meticulously planned, and if the film is to be believed, near-perfection. If only he could have been as much of a people pleaser behind the scenes with those he trusted to keep his secrets as those who watched him on television, he might still be the savior so many hailed him as instead of the cheat so many former colleagues exposed. Since he wasn’t, however, sympathy is no longer a commodity he can afford. At no point do we empathize with Lance because Frears and company embraces the bias going in. There’s no point pretending.

The filmmakers explicitly thank journalist David Walsh (whose book was an “integral” resource) and the USADA report describing what went on with the U.S. Postal Service team. I haven’t read either, but i doubt they utilize the same heightened tone in lieu of objective fact. Walsh (Chris O’Dowd) and his UK-based paper were both successfully sued by Armstrong for slander after all, so they needed facts to exonerate themselves and reclaim damages. I think then that the light of hubris and ego Lance is shone in belongs to Frears, Hodge, and Foster alone. We hate Armstrong’s glee beating Walsh in foosball at the start and we hate him more for slurring co-conspirators in the comfort of his mansion at the close.

All the players are included with equal caricature from Team Armstrong’s off-the-books doctor Michele Ferrari (Guillaume Canet) to the conflicted Floyd Landis (Jesse Plemons) reconciling his faith and drug-abuse while looming throughout in the background as the bad omen he will become. Moments like Lance flirting with a pharmacist to get EPO after his teammates chicken out or his being injected with water intravenously to keep his red blood cell count down while team director Johan Bruyneel (Denis Ménochet) plays interference with the drug tester are pure comedy devoid of the suspense a straight telling would possess. It’s all an elaborate joke and our sainting him makes us the butt of it.

Despite my enjoyment in this turning of the tables to focus on our being duped rather than his being found out, The Program has its failures. This tone renders the few instances where Foster plays Lance as though he is fighting a crisis of conscience false, because we’ve already resigned ourselves to believing he’s been of maliciously sound mind from the start. There are also some weird camera tricks that distract rather than enhance like I’d assume the filmmakers had hoped they would. The scene where Walsh talks with fellow journalists at a table after Lance wins his first climbing stage fakes its focus depth with so much blurring between the foreground and background actors that I missed every word spoken.

Regardless of whether “everyone” was doping, Lance started inquiring about doing so his second year on the tour—before cancer provided the clean slate to do so. This allows the storytellers extreme latitude to do whatever they want with Armstrong’s image and legacy because he destroyed it already himself. The way he’s shown strong-arming everyone standing in his way is hilariously damning in a way we cannot take one hundred percent seriously. Frears and crew aren’t looking to also taint the good Lance did—because it appears the charity was legit. They just want to laugh at us for loving him so blindly. We consistently give our idols the benefit of the doubt so long as they aren’t caught. Only then does our latent morality finally kick in.

The Program premiered at TIFF and opens on March 18th.