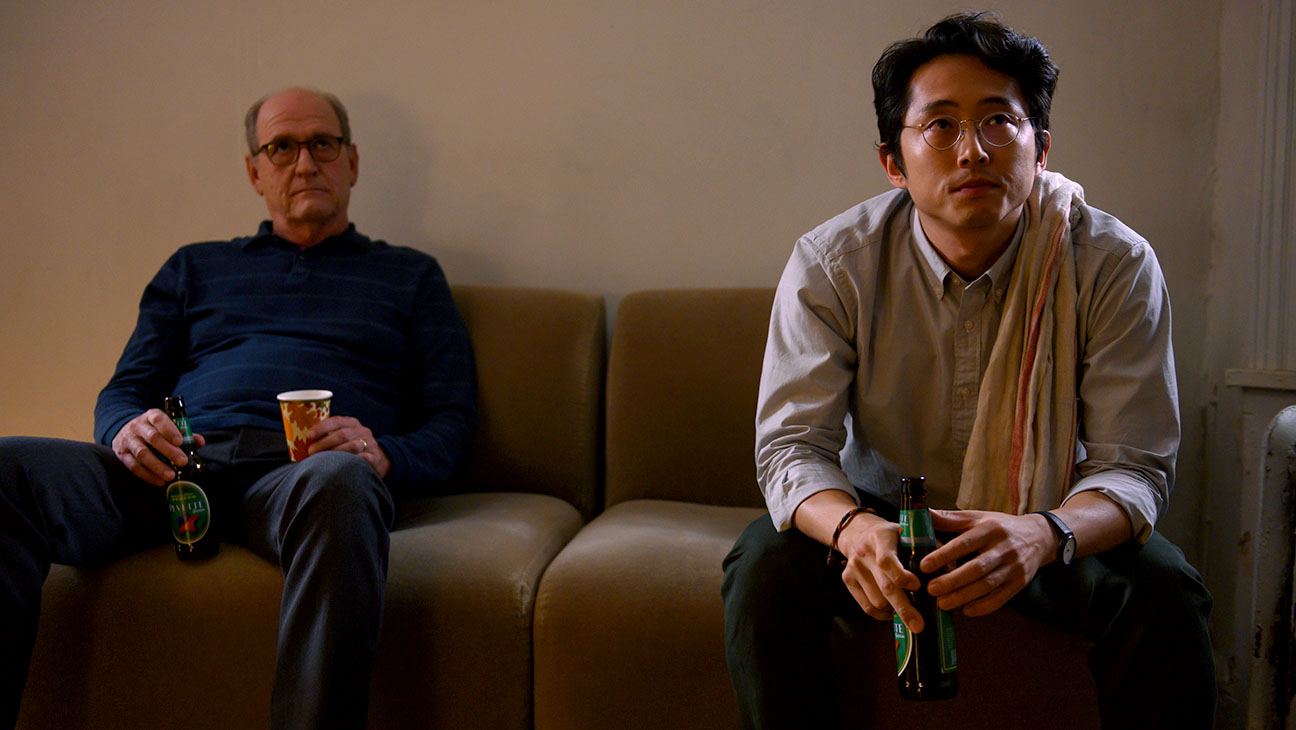 Everything is wrong in The Humans, Stephen Karam’s adaptation of his Tony-winning play. Set entirely in a New York apartment building, Karam’s one-act play transitions to film with one big hook: it’s an intimate drama conceived as a horror film, monsters and ghosts replaced by the rot of a family unit shaken up by a world that’s getting harder to endure. It’s a confident gamble, especially for a first-time director; confidence can only take it so far.

It’s Thanksgiving, and young couple Bridgid (Beanie Feldstein) and Richard (Steven Yeun) are moving into their new Chinatown apartment with the help of Bridgid’s family: parents Erik (Richard Jenkins) and Deirdre (Jayne Houdyshell), sister Aimee (Amy Schumer), and Alzheimer’s-afflicted grandmother Fiona (June Squibb). All seems well and friendly between everyone, but as the day goes on and dinner approaches, cracks begin showing—past resentments, unresolved issues bubbling up to the surface.

But from its first scene, The Humans establishes tension between form and content. Karam and cinematographer Lol Crawley lay the visuals on thick: the first act lets mundane conversations unfold with the camera finding every conceivable way to avoid shot-reverse shot, with low angles and long shots emphasizing the vastness of the space, extreme close-ups trying to convey characters’ anxieties, and exchanges filmed through dirty windows and other obscured surfaces to turn people into abstract entities. (One of the more unique choices: watching someone through a glass doorknob, the light refractions distorting them into something kaleidoscopic.) This is less a coherent visual language and more of a bag of tricks, every unconventional shot designed to unsettle and remind viewers this is a horror movie.

Then there’s the apartment itself, both impressive and excessive in design. A duplex with a black spiral staircase tucked in the back corner, it’s a rundown nightmare: creaky floors, water stains, mold, mildew, and loud bangs from neighboring apartments are just a few of the nasty elements here, only taken to such an extreme that the place looks like it could collapse at any moment. It doesn’t take long to see the apartment as a symbol for the decay within the family, an environment that provides basic needs but is so toxic it’s bound to slowly drain your life away. The setting’s expressionist design is meant to further a dissonance that’s supposed to drive the horror elements. Its execution is more successful at creating a distancing effect that, in turn, neuters the horror altogether.

Karam is lucky to have some clout, though—it allows him to rely on acting powerhouses to keep his film engaging. The ensemble puts in solid work, with Jenkins and Houdyshell being standouts. Jenkins remains reliable as ever, layering his character with traits of an over-worried parent before gradually peeling those layers away and revealing a cruel, selfish center underneath it all. Houdyshell, who starred in The Humans‘ original run, will likely be a revelation for the unfamiliar. She, like Jenkins, takes on the initial role of overbearing mother, but in her case a more tragic figure emerges. Several times Karam settles the camera down for her, and over each lengthy shot she shows an innate understanding of the material, each slight glance and small gesture going a long way to giving her character a depth well beyond what’s on the page.

The Humans is lucky to have such strong talents to elevate it, since Karam’s gambits fail on their own terms. As a horror movie, it’s not especially intense or scary, with an overreliance on jump scares and alienating aesthetic choices. Its scripted impressions are mixed at best, with forced references to 9/11 and the 2008 recession, along with a late reveal that makes sure there’s no ambiguity around the main idea. The Humans spends its time inside its own head when it should have been putting more effort getting into ours.

The Humans premiered at TIFF and will be released by A24.